The True Story Of A Failed Casino Heist 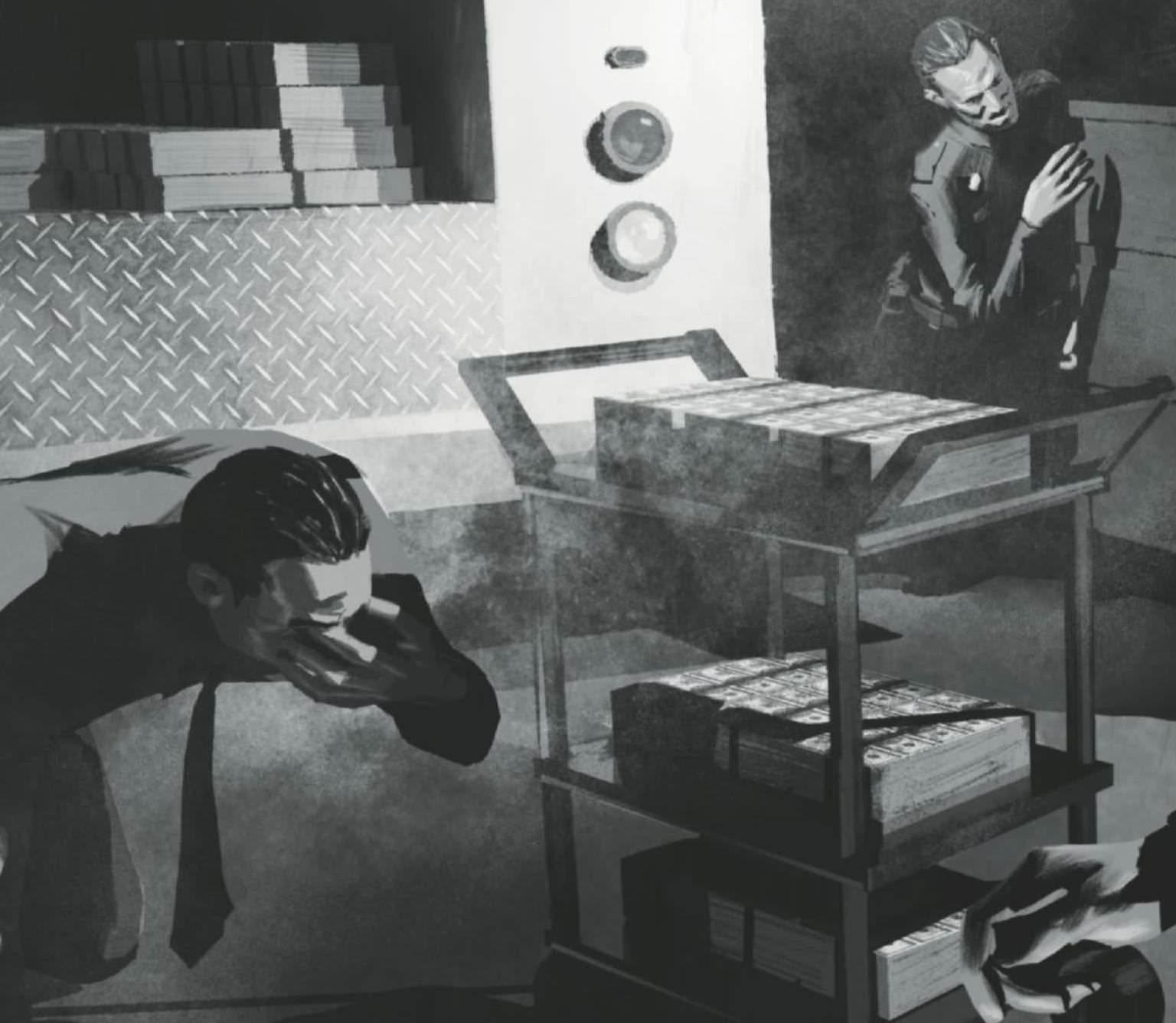 A fake assault rifle. A can of pepper spray. Two ATVs. A motorised skateboard, and a blow-up doll. The inside story of how a twenty-something refugee from Bosnia hatched a brazen scheme to live out his own version of the American dream.

EARLY ONE FRIDAY morning in July 2006, just before dawn, Adnan Alisic, 26, and his friend Fleka, 24, crouched in the back of a hot green van in a parking lot across from the Casino Arizona on the eastern edge of Phoenix and waited. Beside them, in duffel bags, lay the tools for the elaborate heist they’d planned: pepper spray, road flares, smoke bombs, a replica AK-47, a blow-up doll, gas cans, and maps of the area’s maze of subterranean sewer tunnels. After months of meticulous planning, they were about to embark on one of the boldest and most inventive heists of all time. But as the minutes crawled past, they began to fear they’d missed their target, an armoured truck carrying as much as US$10 million in cash. Maybe it had already come and gone? Then Fleka spotted it. Adnan leaped into the driver’s seat, donned ski goggles and a knit cap, and cranked the van into gear, following the truck. He lifted the fake AK onto his lap and hissed to Fleka, “Come on, let’s do this.”

ADNAN ARRIVED IN PHOENIX 10 years before the heist, at age 17, with his parents and sister, one family among a flood of Bosnian refugees escaping Europe’s worst genocide since World War II. Though at first he spoke no English, Adnan was friendly and sharp-witted and soon found work as a room-service attendant at the DoubleTree Hotel in Scottsdale, where his mother, a schoolteacher in her native country, worked as a maid. After a few years, when he’d saved enough to buy his own wheels, a guy he worked with encouraged him to check out a used-car auction.

Adnan was a born hustler who’d honed his entrepreneurial skills as a child during the war. At the used-car auction in Phoenix, he recognised an opportunity — he could snap up cheap vehicles, clean and repair them, and resell them on Craigslist for a hefty profit. It took him six months to flip his first car, but by age 21 he’d opened his own dealership, Alisic Motors, and was buying and selling a dozen cars a week. He soon opened a body shop and then a restaurant called Café Empire, which quickly became a social hub for the area’s sizeable Bosnian population.

If the American Dream had a spokesmodel, Adnan could’ve fit the bill — handsome and full of energy, he flashed around town in a gleaming black Mercedes SL600, hit nightclubs with friends to catch Bosnian singers, and landed a beautiful girlfriend, Lejla Selimovic, from Sarajevo, whose family had escaped similar horrors. Adnan had washed up on American soil traumatised and undernourished, battered by war, owning nothing but the clothes on his back, and in just a few short years, he’d willed his way into a life of enviable comfort.

Too much comfort, perhaps. As his businesses flourished and Adnan grew his staff, he suddenly found himself with plenty of free time. His friend Nermin, who was dating Lejla’s twin sister, Sejla, told him about the fun he’d had playing blackjack during a weekend trip to Vegas, and one night Adnan drove alone to the Casino Arizona in Scottsdale, a sprawling complex just beyond Phoenix’s eastern border. It was the first time Adnan had ever been inside a casino. He played small-stakes blackjack for a few hours, losing $300.

It was his next visit a couple weeks later that got him hooked. “Call it beginner’s luck,” he says. “You know those nights when you just can’t lose?” Adnan crushed it at the blackjack tables and walked away with nearly three grand. “You feel invincible,” he says. “Luck smiles on you, and you think it’s because you somehow deserved it.”

Adnan began to play blackjack at Casino Arizona every night, sometimes alone, sometimes with Nermin, and sometimes with his friend Ismar Kabaklic, known as Fleka, a loyal but hotheaded Bosnian he’d hired as a salesman at his dealership. Inside, time seemed to stand still, as a symphony of slot machines dully jingled, waitresses doled out free drinks, and dealers spun cards. When at last they headed out to the parking lot, it was always a surprise to see the sun coming up.

Some nights Adnan won big, especially at first, but over time the losses came more frequently and spiralled ever higher. Why would Adnan keep coming back, flushing away his hard-earned cash? He attributed his blackjack addiction to a toxic brew of poisoned genes from his alcoholic father, survivor’s guilt from the Bosnian War, and, most of all, a ferocious competitive streak. “I just hated to lose,” he says now. Each trip to the tables presented a fresh opportunity to come roaring back, and on the nights he won big, the adrenaline surge was beyond euphoric.

Over the next several years, Adnan drained cash from office accounts to spend at Casino Arizona, and without money to pay his employees, they slowly melted away, leaving only Fleka; his sister, Adnana; and a few others scrambling to keep his businesses afloat. Sometimes Adnan managed to keep himself away from the casino for months, but his addiction always outstripped his resolve, and he’d wind up back at the Arizona, walking out to his car at dawn, full of heartache and fury, pockets empty.

Soon he was borrowing money and blowing it the same night, racking up debts he couldn’t repay. Adnan had started at the bottom, made it to the top, and fallen back into a deeper hole than when he’d stepped, penniless, off a U.N. plane. He’d even pulled Fleka and other Bosnian blackjack fans into the abyss. Adnan lost nearly US$800,000 at Casino Arizona; add Fleka and their other pals, and the total was over a million.

One evening, Adnan scraped together a few hundred bucks and made the familiar drive to Scottsdale to gamble. But this time, he was on a tear. “Simply couldn’t lose,” he says. “If I had a bad hand, the dealer went bust. If I needed an ace, I pulled an ace.” He was up almost 60 grand — on his way, perhaps, to getting back on his feet.

Suddenly, he found himself surrounded by security guards who asked for his ID, though he’d been such a frequent visitor he knew many of the blackjack dealers on a first-name basis. On principle, he refused, and the guards hustled him toward the doors. Adnan was furious. The casino had had no qualms about squeezing him dry night after night, but the one time luck was on his side, they’d quashed his monster rally. He shouted at casino workers and even shoved a guard, and as they escorted him out of the building, they told him he was banned. That’s fine, Adnan resolved, sitting in his car, boiling with rage. If they won’t let me win my money back, I’ll find another way.

ADNAN’S WINNINGS OFFERED a brief respite, as he covered bills and paid down debts. But it wasn’t long before he was back at the tables. Eighty-sixed from Casino Arizona, he started visiting neighbouring casinos, arriving full of hope, and leaving, most nights, broke and desperate.

Late one night, while heading home on the 101 freeway, Adnan pulled over to take a leak. Afterward, he peered over the guardrail, looking down an embankment to the desert floor 30 feet below, and in the dim starlight glimpsed a dark, hollow shape that appeared to be the mouth of a tunnel. The entrance was as round and wide as a car, and he was able to walk in without even ducking his head. It twisted under the road, then doglegged to the right, disappearing into darkness toward the Casino Arizona. That’s when a crazy idea seized him.

The next morning at Alisic Motors, Adnan grinned at Fleka. “I know how we’re going to get our money back,” he announced. Later that night, they dressed in dark clothes, burned over to Scottsdale, and parked at a shopping centre near the tunnel entrance. Waiting for a lull in traffic, they scrambled across the freeway and down the embankment, into the opening.

The stench was overpowering. Their flashlights shone across a trickle of trash and raw sewage. Graffiti covered the walls. Rats scampered past empty beer bottles. Some pathways forked off in mysterious directions; others curved back and forth and came to a dead end. Where the main tunnels ended, Adnan noticed giant green plastic pipes, several feet in diameter. Banging his Maglite against them produced an indeterminate hollow sound. “I want to see what’s inside,” he told Fleka.