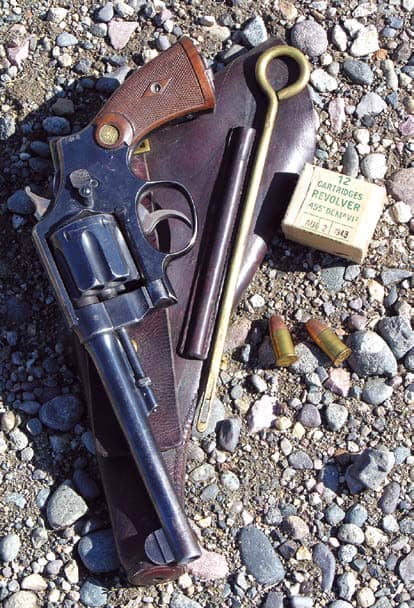 Twice in the twentieth- century, Britain declared war on Germany when woefully short of firearms. In 1914 and 1940, its government quickly turned to the U.S. armament industry for both handguns and rifles. Soon after the war declaration in 1914, the country turned to Smith & Wesson because the company was already tooled-up for large frame double-action revolvers. It was easy for the British to prevail on Smith & Wesson to divert production to the .455 cartridge.

The first 5,000 sent overseas were First Model Hand Ejectors, commonly referred to now as “Triple Locks.” That particular model has achieved a near reverent status among Smith & Wesson collectors as one of the (if not the) finest big-bore revolvers ever made. One factor for which Triple Locks are noteworthy was as an introductory revolver for Smith & Wesson’s new .44 Special cartridge. Less well-known is that a few were also chambered for .45 Colt. Because revolvers for .45 caliber were already being made, a switch to .455 Webley was readily feasible. Despite their different cartridge names, S&W factory barrel bore and groove diameters for Colt and Webley cartridges were the same.

Be that as it may, the Brits were not totally satisfied with those first 5,000 S&W .455s, with one complaint being that the mud in France tended to bind their finely-fitted mechanisms. This has often been pointed to as the major reason Smith & Wesson dropped the First Model Hand Ejector’s third locking lug on the cylinder crane. Domestically, Triple Locks were not selling all that well. Not counting the British purchase of 5,000, only about 15,000 were sold in the U.S. between 1907 and 1915. Dropping the third lock allowed a retail price reduction from $17.00 to $15.00 and hopefully meant better sales.