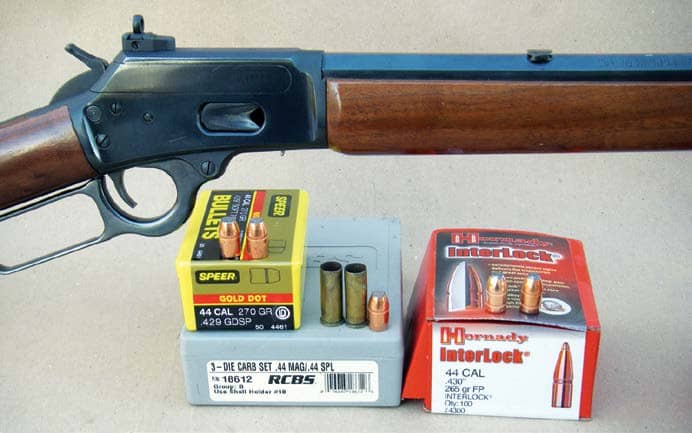 Q: Based on your articles in Rifle Magazine and Handloader it is obvious that you have extensive experience with Marlin rifles. I have a Marlin Model 1894 chambered in .44 Magnum that I purchased new about 15-years ago. The first thing that I did was ship it to Brockman (Brockman Custom Gunsmithing, 2165 South 1800 East, Gooding ID 83330) for an action job and to lighten the trigger pull to 3-pounds. I thinned the fat forearm and installed an X-S aperture sight and white stripe post front. Using Speer and Hornady 240-grain jacketed bullets pushed with 21.5 grains of Accurate No. 9 powder with CCI #300 primers (a load that I got from you) I often get groups measuring around 1½ to 2-inches at 75-yards. It is a ton of fun just to shoot offhand rolling cans and rocks, but I have also taken two Kansas whitetail deer with it, both with a single shot.

I have been very pleased with the rifle, but have one problem. I have a friend in Montana that wants me to come hunt black bear with him in the fall of 2020. He suggests that we can possibly find a 350 to 400 pounder or maybe larger. I would like to use a heavier bullet, such as the Hornady 300-grain XTP. But when I loaded these bullets, I could not get the same accuracy as my proven 240-grain handloads. And in order to get this bullet to function correctly, I had to seat the bullets deep to the upper crimp groove for an overall cartridge length of around 1.600 inch to permit cartridges to function through the Marlin action. As a result, powder charges had to be reduced from published “revolver” loads that permit that bullet to be seated out and I could not get the velocities that I had hoped for.

Is there anything that I can do to get the 300-grain XTP bullets to shoot well in my rifle? Is there another bullet (or bullets) that I should be considering? Thanks in advance for your help.

A: The core problem you are experiencing with heavyweight bullets is the rather slow 1:38 twist rate of Marlin .44 Magnum rifles, the same twist used on the Remington 788, Ruger Deerstalker Carbine, Winchester Model 94, Browning 92 and others. For more than 20 years I have met with Marlin representatives, visited their plants and have attempted to convince them to change the twist rate to 1:20, but I have been unsuccessful. Interestingly, other companies, including Ruger, have changed their twist rates, but not Marlin.