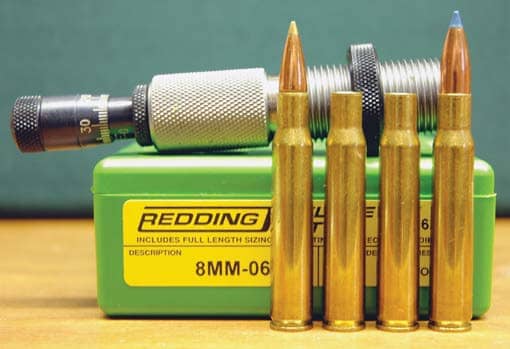 Just about every article, col- umn and reloading manual cartridge introduction written about the 8mm-06 wildcat has basically the same beginning. It was created due to the great number of Americans owning military surplus 8x57mm Mauser rifles and the lack of ammunition to shoot in them. Reaming out the chambers of those rifles for the readily-available .30-06 case necked up for .323-inch bullets solved that problem. I have long been a bit puzzled by this explanation.

In his book Mauser Bolt Rifles (1976), Ludwig Olson wrote that Remington, Peters and Winchester introduced 8x57mm Mauser ammunition following World War II. With the coming of thousands of military surplus rifles imported to America beginning in the early 1950s, the availability of factory ammunition for them was good timing.

My reference library contains the second edition of Gun Digest published in 1946, and its listing for Winchester ammunition has two loads, one with a 170-grain bullet at 2,530 fps, the other with a 236-grain bullet at 2,100 fps. For a reason noted in the following paragraph, those loads were sometimes cataloged as “8mm Special.” When the 8x57J cartridge was introduced in the Model 88 Commission rifle in 1888, it was given a bullet diameter of .318 inch. A later increase in bullet diameter to .323 inch prompted the 8x57JS cartridge designation. Ammunition with softnose bullets of both diameters continued to be loaded in Germany, and manufacturers there pointed out the difference to consumers with a warning on S-type ammunition packaging, stating it was not for use in rifles with Model 88 bore dimensions. To serve as an additional reminder, RWS blackened the primer cups of S-type ammunition.

American ammunition manufactures took a different approach by loading 8x57mm ammunition with a “special” bullet of .323-inch-diameter that was safe to use in rifles intended for use with .318inch bullets. Maximum chamber pressure was 37,000 CUP for a velocity of 2,530 fps with a 170grain bullet. Fairly low pressures, along with giving the bullet an extremely thin copper jacket and a soft core of virtually pure lead, allowed it to squeeze through a .318-inch barrel without damage to rifle or shooter.

Was the typical American hunter in the days prior to the availability of personal chronographs sophisticated enough to realize that domestic 8mm Mauser ammunition was reigned back in velocity? Were they dissatisfied with the performance of those thin-jacketed factory bullets on game? Could that explain why thousands of hunters had their rifles rechambered to 8mm-06? The answers to those questions are lost in time.