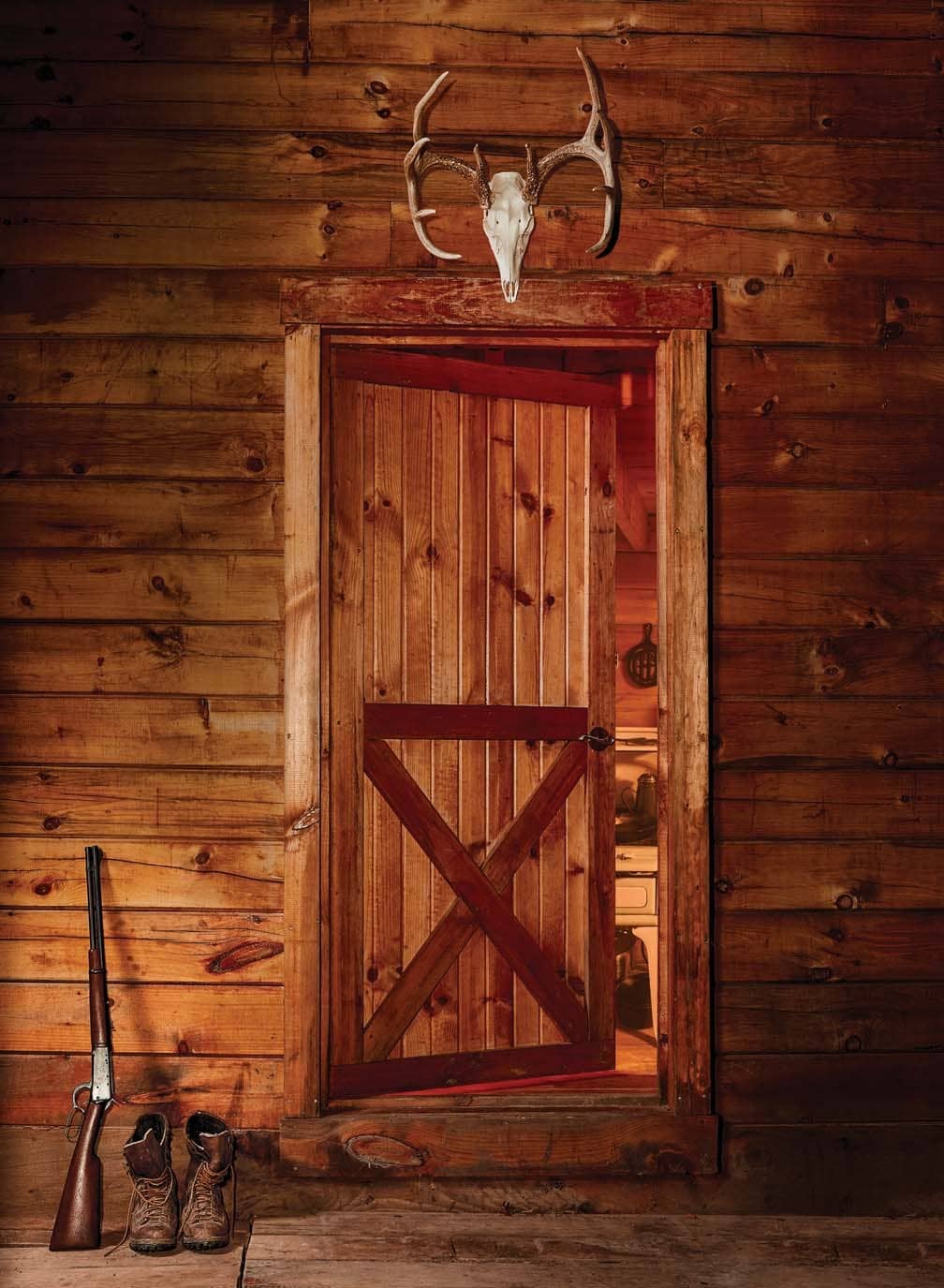 Is there any place better than a good hunting camp? It has everything: great food, games and pranks, and of course, hunting. Shoot, we don’t even mind going to camp for grueling work days in the summer. Here, our contributors share their favorite stories, traditions, and lessons learned from camps they’ve shared. So come on in and join us. The door’s open.

FIRST, YOU’LL NEED A HEAD. A whitetail buck is best, since the antlers provide a sturdy grip and because the skull isn’t too big, but any hard-earned trophy—bear, pronghorn, elk—will do.

Skinning the skull is best performed around the campfire. You’ll need a sharp knife and a cold beer. Work carefully but efficiently. Marvel at the way the nose comes away in your hand like a doorknob and how the ears don’t seem to be attached to anything. Snap the lower jaw and carve out the tongue. Once the hide has been peeled away, you’ll turn to what naysayers call “the disgusting part.”

Cut out the eyeballs, then extract the brain. Savor this part—scooping slippery chunks of brain matter with a twisted loop of wire hanger is an art. When the skull is empty, submerge it in simmering water and add a generous helping of baking soda. Remove the skull every 15 minutes to attack it with a wire brush. Each time you think you’ve gotten the last scrap of flesh off, another baptismal round in the pot dislodges more. The delicate nasal bones, in particular, are like a maze stuffed with half-cooked headcheese. Loosening this mess with a power washer is easiest, but any long, slender object will work. As you’re rooting around your buck’s nose, a buddy will inevitably chime in. This person always has clean hands and always asks the same question: “You know you can pay someone a hundred bucks to do that for you, right?” Sure I do. But where’s the fun in that?

ONE TIME, AS I WAS walking toward the practice range in a New Mexico elk camp, I saw another hunter sitting at the bench with his rifle, staring downrange, not moving and not shooting. I thought to myself, Must be a new 6.5 Creedmoor owner quietly congratulating himself.

I asked if I could join him, to check my scope.

“Oh yeah,” he said. “I’m just watching the boneyard down there. They dump their elk scraps at the end of the range, and a man could sit here all day long coyote hunting. Hell, I’ve killed two in the last 30 minutes. This .300 Win. Mag. flattens them.”

I realized I was looking at a kindred spirit, and I have never thought of dumping deer scraps the same way since. These days, ours all go to an open fescue field, within walking distance but out of sight and sniffing range of camp—and about as far away from the good deer stands as I can get them. If coyote hunting after whitetail season is your thing, then I know just the place.

BE THE ( garbage) MAN

New to camp and want to become one of the crew? Take out the garbage. Doing so signals that you’re not above anyone else and that you don’t mind doing some dirty work. Which breaks down barriers like nothing else. Several years ago, I found myself as the lone outsider at a funeral reception in a First Nations village in Alaska. Actually, they meant to tell me not to come but couldn’t find my phone number. No one at the camp had the slightest interest in talking to me, so I did the only thing I could think of: I started carrying bag after bag of trash to a dumpster. Later, an elder approached me, nodded, and said, “I saw what you did tonight.” I’m glad it worked, because the only other thing I could think of was to start emptying the outhouse, which is probably not the thing to do at a funeral.

the art OF puttering

IN A HUNTING OR FISHING CAMP, EFFECTIVE puttering is as vital to your well-being as an air mattress that doesn’t leak. Eventually you’ll find yourself with time to kill, and you must devise a way to occupy the idle hours or your friends will find you in the woods having conversations with porcupines or hooting and gibbering softly at the clouds. 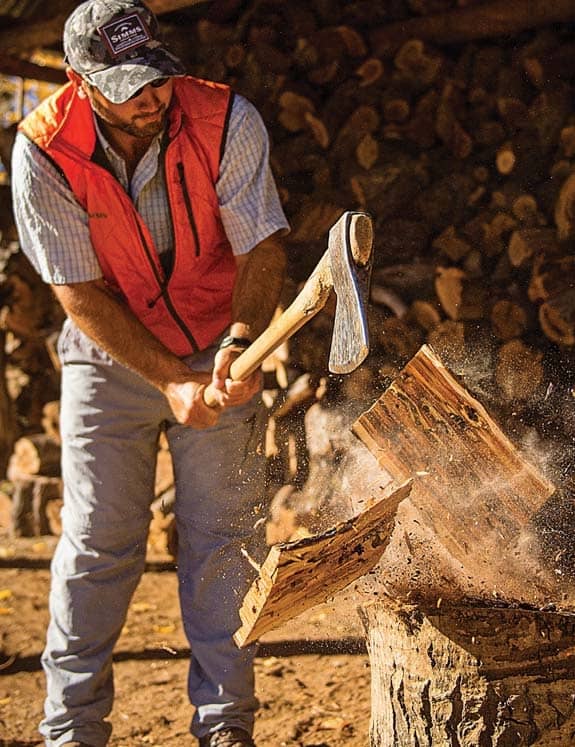 Reading is one answer. So are crossword puzzles. Cards and drinking were once huge, but not much anymore. For some, conversation does nicely. I know of one Alaska caribou camp where the nimrods spent three days discussing ways to murder Bill Heavey, who was also there.

In the Northwest Territories, Bob Newman and I killed time by feeding ground squirrels. On an Alaska hunt, I went beachcombing on the shores of the Bering Sea, cataloging all the fantastic flotsam and jetsam that washed up. I stopped when I came upon a dying baby seal attended in its last hours by a fox that was waiting to eat it.

True puttering should be at least partly useful. I’ve sighted in rifles for the sighting-in disabled, done stock inletting, mounted or remounted scopes for those who had done it all wrong, sharpened knives, repaired rubber boots, split firewood, carried firewood, sewed, and performed minor first-aid in an unsympathetic manner. (“How did you do that? What the hell were you thinking? We may have to fly you out of here.”)

Some puttering may be off-limits. Most outfitters don’t want you anywhere near the horses if you’re not riding them. Camp cooks may not welcome your help in the kitchen. If you whack yourself in the instep while splitting wood, it will not be appreciated. In Africa, skinners are masters of their craft, and an offer of assistance may be considered an insult.

In the end, productive puttering requires both judgment and skill— judgment to know when something is above your pay grade altogether, and the skill to do a job right. Once, on an elk hunt, I happened to dry-fire a Remington 700 that belonged to the outfitter’s wife. The trigger was set to a dangerously light pull weight. A previous client, looking for something to do, had “adjusted” it.

On the other hand, a friend of mine who builds rifles and is a mechanical genius found himself in a caribou-camp tent with an oilstove that barely functioned. He studied the problem and saw that there was a part that had no reason for existing, so he removed it and the stove hummed like a sewing machine. The camp manager witnessed the transformation and asked, “Can you do whatever you just did to the rest of my stoves?”

That is puttering at its highest level. 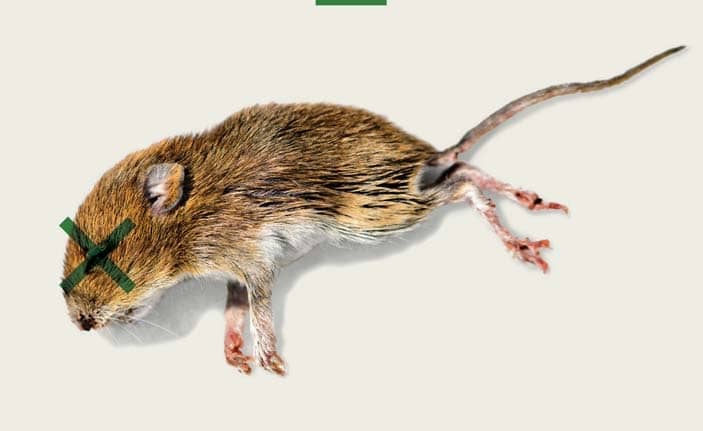 SURE, YOU COULD just pick up some Victor snap traps on the way to camp. But the old bucket-and-beer-can mousetrap is fun to make and has the potential to save you up to $1.29 (if you already have everything on hand), and it only needs to trap one mouse for you to brag about it all week. And think of it this way: Would you rather kill a buck with a plastic bolt- action from a big-box store or with a self-bow? Exactly.

There are all sorts of variations on this contraption, but the basic recipe is the same. First, place a wooden dowel or straightened coat hanger across the mouth of a 5-gallon bucket. Next, thread an empty beer can lengthwise onto the dowel. Then smear peanut butter on the can and add a little water to the bucket. When a mouse scampers across the dowel and hops onto the can to eat the peanut butter, the can spins and the mouse goes for a swim. You’ll have to place the trap in a spot where mice can access the mouth of the bucket, or you can run a simple wooden ramp up to the bucket.

What do you do with the mice after they’re trapped? Well, you can let the buggers drown. That works. Yours wouldn’t be the first meat pole with more mice hanging than deer. Or you could set them free. Why would you do that? Well, I’m not saying that you should drop a mouse into one of your buddy’s boots , for example, but with this trap, you have the option.

Readers share some of their most unbreakable camp commandments

Safety first. Everyone pitches in. No drama.

Pour your own drink.

He who doesn’t cook shall wash the dishes.

She who yells loudest is always right.

No peeing off the porch (unless it’s raining). Double flush.

Have thick skin. Your tail will be twisted.

When someone asks where you killed your deer, you tell them: “In the woods.”

Be honest and ethical. Thank the game for its sacrifice.

Take all the rubbish home, and leave camp immaculate.

OR TWO DAYS DURING the filming of a South Florida turkey hunt, senior editor Natalie Krebs and I had been scaring off Osceola gobblers as if our careers depended on it. At noon on the third day, we were eating lunch at camp in silence, a putt and a wing tuck away from lashing out at each other. Krebs suddenly said, “There are three longbeards walking through the damn yard.”

I grabbed a reaper decoy and my shotgun, and Krebs grabbed her camera. We sneaked around back, belly- crawled behind the propane tank, and popped the fan up maybe 30 yards from the turkeys. The toms charged across that manicured Bermuda in a mess of gobbling, and all I had to do to kill the biggest one was wait for it to clear the landowner’s truck and for Krebs to say she had his ugly head in focus.

In most remote hunting camps, it’s perfectly legal to fill your tag in the front yard, but we hesitate, as if waiting for the critter to cross the driveway before shooting it is the morally superior thing to do. Evaluate your scruples ahead of time so you don’t screw it up when a longbeard or a big buck strolls past the patio. Ultimately, the decision to shoot or not is yours—but if you’re waiting on my permission, consider this your blessing.

THERE’S A LOT OF TARGET PANIC BORN at camp. You miss a buck in the evening and, convinced your bow is screwed up, charge back into camp to shoot by the glow of truck headlights. Then you really do screw up your bow by messing with the sight. You miss another buck the next morning and vow to give up bowhunting forever.

But camp is also a good place to beat target panic, because it’s the best of all places to clear your mind and realize that the condition is caused above all else by an erosion of confidence. Using a back-tension release, blind-bale shooting, hiring a coach, and all the other usual advice is helpful—but chances are good you didn’t bring back-tension releases, bales of hay, or an archery coach with you to camp.