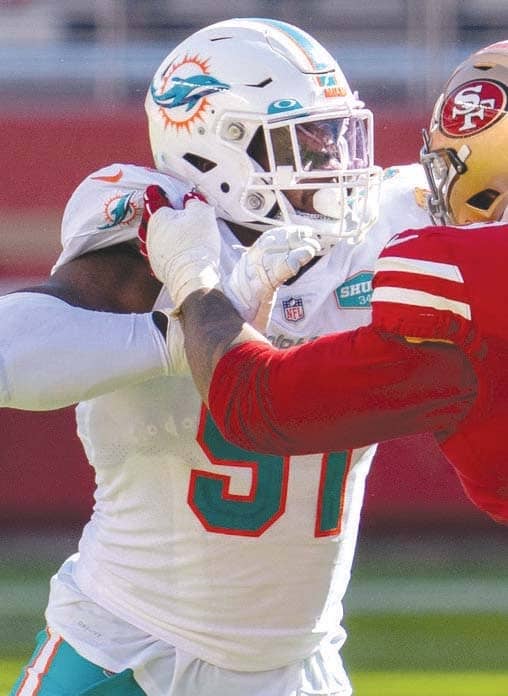 Head coach Brian Flores offers his thoughts on a wide variety of topics, including the luxury of having a reliable kicker, persevering through adversity, and defensive linemen Emmanuel Ogbah and Raekwon Davis

Q. You were with an organization that was very blessed to have K Adam Vinatieri and K Stephen Gostkowski, who were very dependable. Now you come here and have K Jason Sanders. I wonder if it be might easy for people to overlook the importance of kickers until you don’t have one. How much better do you sleep at night knowing you have a guy who you could depend on?

BF: I started in the kicking game. That’s where I got my break in coaching. I know and understand how important those guys in those positions are, whether it’s kicker, punter, long snapper, returners, ball security and things of that nature. To have a guy who is dependable, a guy you know is going to do everything possible to make sure he puts himself in the best position to make a great kick — make the kick that we need, make the punt that we need, give us the snap that we need. You really want that at all positions, but no one thinks about those specialists until we’re down to the wire and we need the kick. Jason has done a great job. I think it’s important to him that he continues to improve and get better and continue with his consistency. That’s been good thus far and we need to just keep going in this direction. Yes, I’m very pleased at where he is, and the job he’s done really on field goals but also kickoffs. He’s done a good job from that standpoint. Just every day, just his attitude and work ethic on a day-to-day basis, he’s really done a good job really since I’ve been here.

Q. The Atlanta Falcons had four positives (recently), it sounded like. Do you think we’re getting to the point now that the league would be best served to just put in a second bye and give themselves more flexibility going forward? Are you expecting to play 18 weeks this year because of what’s going on?