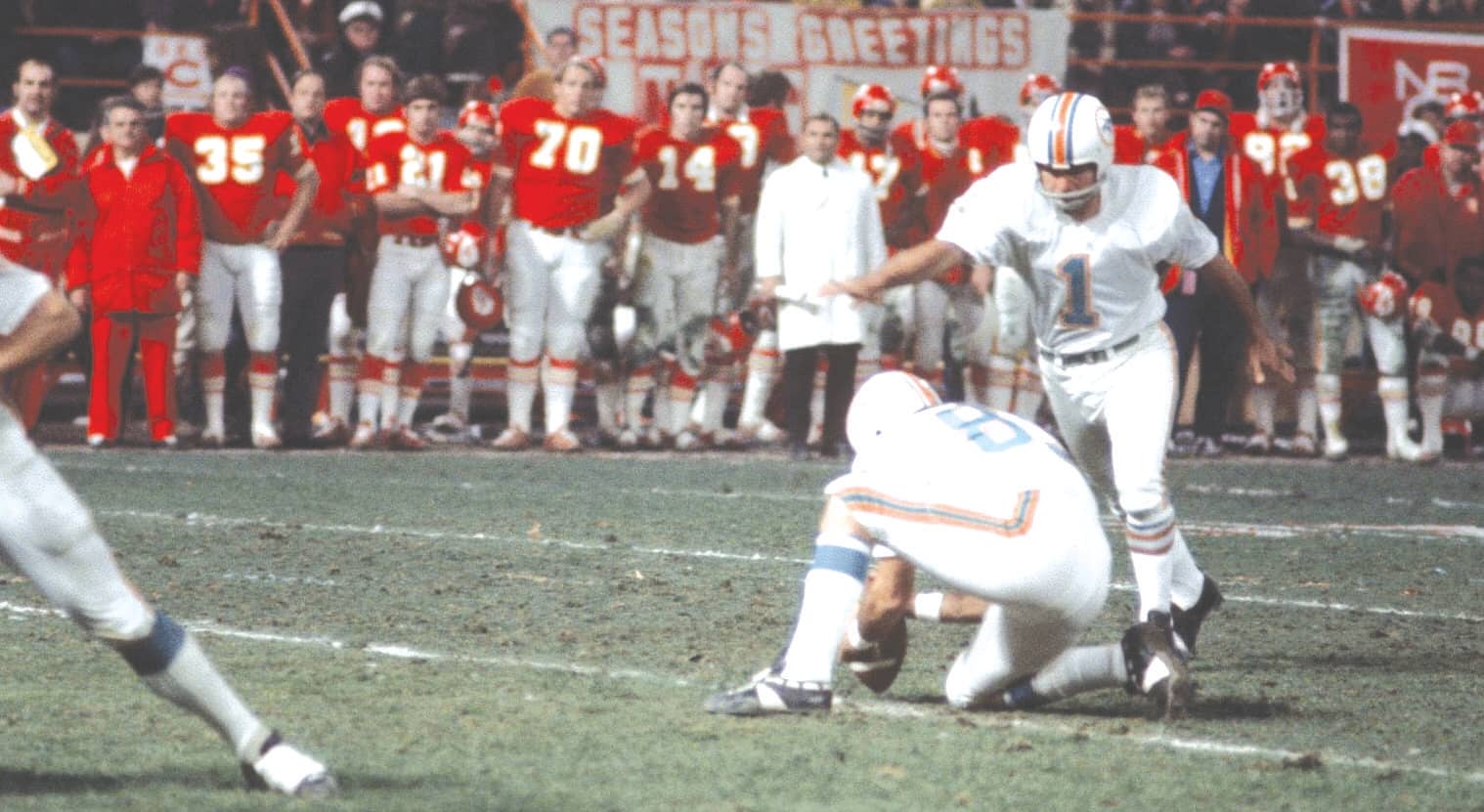 As the NFL celebrates its 100th anniversary, we count down the top 100 games in Dolphins history

Putting together a list of the top 100 games in Dolphins history is no easy task, considering the team has played almost 900 of them — including playoffs — since the franchise began play in 1966.

Ranking them from 1 to 100 is an even more difficult task, but that didn’t stop us from doing it as a way of doing our little part for NFL 100, the league’s celebration of its 100th anniversary.

So here it goes with Part 2 of the countdown, games 1 through 50:

50 — Sept. 22, 2013, Dolphins 27, Falcons 23: Second-year quarterback Ryan Tannehill completed nine passes on a 75-yard game-winning drive capped by a 1yard TD to tight end Dion Sims as the Dolphins improved to 3-0 on the season.

49 — Sept. 14, 1992, Dolphins 27, Browns 23: This Week 2 Monday night game ended up being the Dolphins’ season opener because their Week 1 game against New England was postponed in the aftermath of Hurricane Andrew. And what an opener it turned out to be, as Dan Marino directed a late game-winning drive capped by a Mark Higgs touchdown run.

48 — Sept. 2, 1984, Dolphins 35, Redskins 17: While there was a lot of excitement heading into Marino’s first full season as a starter, the opener seemed daunting on the road against a Washington team coming off two Super Bowl appearances. It wasn’t daunting after all. Marino threw five TD passes to start his historic passing season.

47 — Dec. 20, 2004, Dolphins 29, Patriots 28: The 2004 season was one to forget for the Dolphins, but this Monday night thriller was one to remember. A.J. Feeley gave the 2-11 Dolphins a huge upset against the 11-2 Patriots with a fourth-down game-winning TD pass to Derrius Thompson and the defense picked off Tom Brady twice in the late stages.

46 — Nov. 20, 1978, Oilers 35, Dolphins 30: This was game at the old Foxboro Stadium could not have started worse for the Dolphins, who fell behind 14-0 on two picksixes and lost Marino to an injury. But backup quarterback Damon Huard slowly brought the Dolphins back and won the game with a 5-yard TD pass to fullback Stanley Pritchett with 23 seconds left.

42 — Dec. 21, 2008, Dolphins 38, Chiefs 31: Needing a win to put themselves in position to win the AFC East, the Dolphins won a shootout at Arrowhead Stadium in the coldest game in franchise history. Chad Pennington had three TD passes, two to tight end Anthony Fasano, to outduel Chiefs QB Tyler Thigpen, who would join the Dolphins two years later. 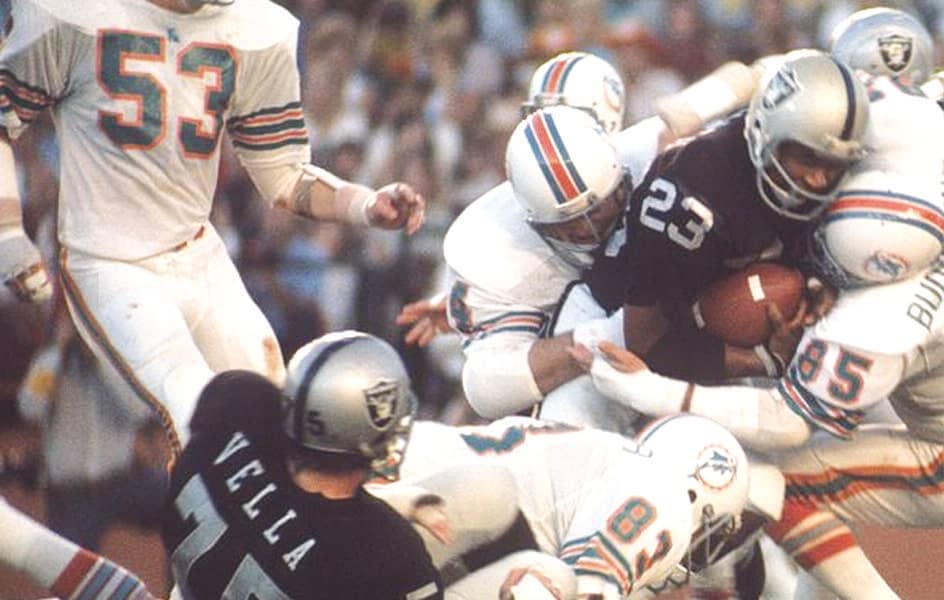 41 — Sept. 9, 2018, Dolphins 27, Titans 20: In addition to being a game that featured a lot of big plays, including Jakeem Grant’s kickoff return for a touchdown and a 75-yard TD pass from Tannehill to Kenny Stills, this game also had the distinction of being the longest in NFL history thanks to two weather-related delays of over an hour.

40 — Dec. 4, 2005, Dolphins 24, Bills 23: The Dolphins closed Nick Saban’s first season as head coach with five consecutive victories, none more thrilling than this one. Backup QB Sage Rosenfels came off the bench to rally the Dolphins from a 23-3 deficit, winning the game on a late touchdown pass to Chris Chambers, who had 15 catches for 238 yards.

39 — Jan. 4, 1986, Dolphins 24, Browns 21: The Dolphins found themselves facing a shocking 21-3 thirdquarter deficit at the Orange Bowl after Earnest Byner’s 66-yard touchdown run, but Marino brought them back thanks in large part to two TD runs by Ron Davenport.

38 — Oct. 9, 1983, Bills 38, Dolphins 35 (OT): This back-and-forth affair ended in a frustrating loss for the Dolphins, who saw Buffalo tie the game late in regulation on a fourth-and-goal TD pass from Joe Ferguson to Joe Cribbs and then missed two chances to win in overtime when Uwe von Schamann missed field goal attempts from 52 and 42 yards, but there was something more important here. This was Marino’s first career start, and he lit it up with 322 passing yards and three touchdowns.

37 — Dec. 31, 1994, Dolphins 27, Chiefs 17: Ten years after they faced in the Super Bowl, Marino and Joe Montana had another playoff battle, this time in Miami. After the teams battled to a 17-17 halftime score, the Dolphins pulled away in the second half, thanks in part to J.B. Brown’s interception in the end zone.

36 — Dec. 30, 1973, Dolphins 27, Raiders 10: The Dolphins secured their third consecutive trip to the Super Bowl with a methodical dismantling of another 1970s AFC powerhouse that featured strong defense and a run-oriented attack — the Dolphins ran on 53 of their 60 offensive plays.

35 — Jan. 9, 2000, Dolphins 20, Seahawks 17: The last victory of Marino’s Hall of Fame career came at the Kingdome and featured a fourth-quarter comeback and J.J. Johnson’s 2-yard game-winning touchdown run. Trace Armstrong led a strong defensive effort with three sacks and Terrell Buckley had a game-clinching interception in the final minute. 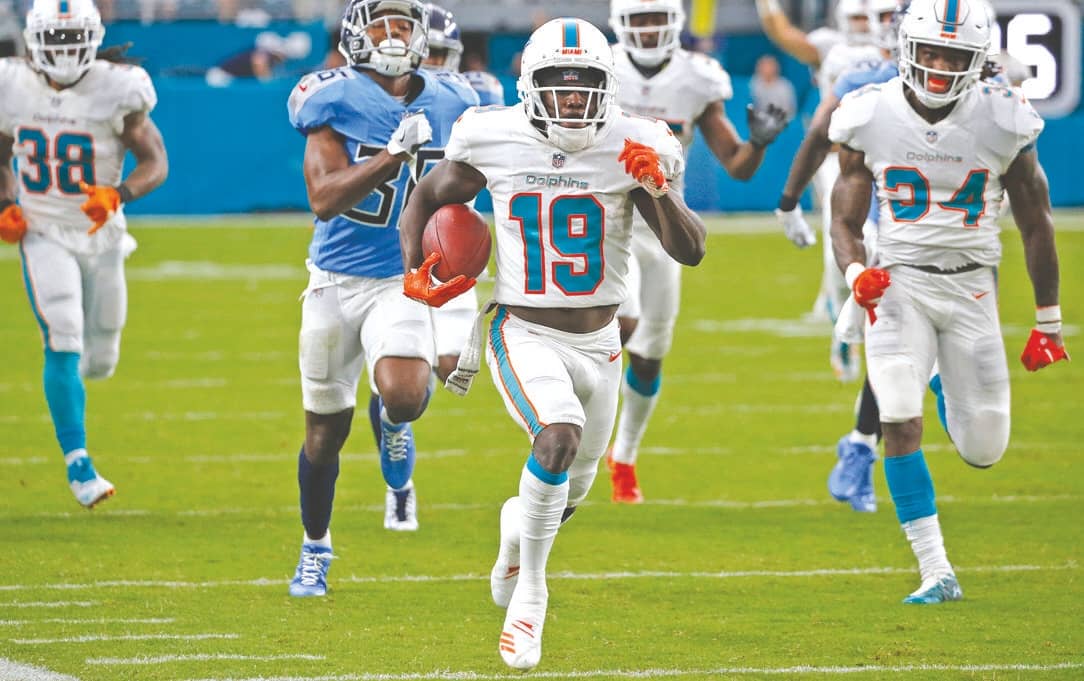 34 — Sept. 17, 1972, Dolphins 20, Chiefs 10: This much-anticipated rematch of the 1971 Christmas Day playoff classic turned into a bit of a dud after the Dolphins jumped to a 17-0 lead on their way to an easy victory, and it set the tone for the Dolphins’ march to a perfect season.