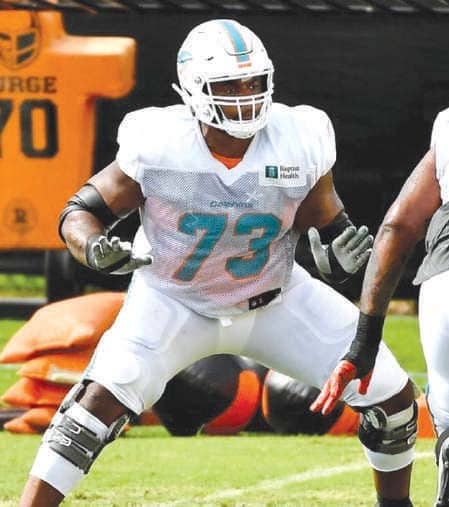 The question of when Austin Jackson would be ready to get into the starting lineup at left tackle for the Dolphins got its official answer in the Week 1 game against the New England Patriots.

The issue actually had been settled long before that, and that’s a testament to how quickly Jackson showed he could handle the assignment.

For good measure, he went out in his first NFL game and showed that the situation simply wasn’t too big for him.

Of everything that happened in the 21-11 loss against the New England Patriots at Gillette Stadium, as disappointing as it was, it just might be that Jackson’s performance was at the top of the list.

He joined some pretty select company that day, becoming only the fourth rookie in franchise history to start an opener at left tackle.

Like Webb and Long, Jackson was a first-round pick, though he wasn’t considered nearly as much of an NFL-ready prospect as the other two.

On the contrary, a lot of draft analysts suggested that even though he had a high ceiling, Jackson might need some time to develop and reach his potential.

That still might be true, but nothing will change the fact that he looked impressive in that opener against the Patriots.

“Well, it’s the first game; there’s a lot of things he’s going to improve on,” offensive line coach Steve Marshall said. “The thing that I was really impressed with Austin was his competitive spirit. The guy fought hard. He’s a tough guy and really did some good things. Obviously we went back and looked at the tape and talked about what needs to get done here moving forward.”

For his part, Jackson offered this assessment: “I expect to show up and compete every day. At the end of the day, there is still a lot of things I need to work on and get better at. Keep working, keep doing the things I’m doing well now, but also keep getting better every day.”

Jackson, of course, was selected with the 18th overall pick in the 2020 NFL draft, which the Dolphins acquired from the Pittsburgh Steelers in the trade that sent defensive back Minkah Fitzpatrick out of Miami.

Jackson was the fifth of six offensive tackles selected in the first round. All five started on opening day except for Isaiah Wilson, the last of the six, who began the season on Tennessee’s COVID-19 list.

The Dolphins actually had two rookies starting on the offensive line against New England, the first time since 2008 that’s happened in an opener.

Along with Jackson, Solomon Kindley started at right guard after winning the job in training camp as a fourth-round pick out of Georgia.

Like Jackson, Kindley acquitted himself admirably in the opener.