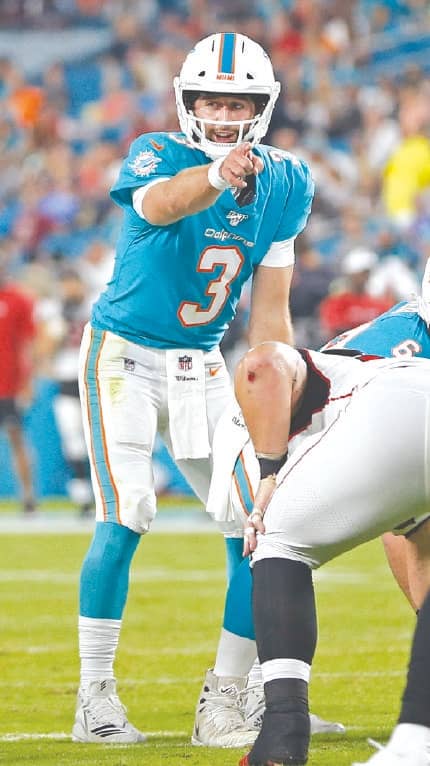 Creating the culture and setting the expectations

Q. You guys won five games and got the No. 5 pick in the draft. Was this season a success to you?

Chris Grier: Yes, absolutely. I think from Day 1, we talked about Brian (Flores) coming in and creating the culture and setting the expectations for the organization and for us, I think we’re very excited about the future. I think yesterday was a culmination of the guys’ work throughout the season. They improved each week, got better and better, and so I’m excited for the future.

Q. A year ago at this time, Stephen Ross ordered a rebuild. How would you describe the progress you made in 12 months?

CG: Very good. I talked about laying the groundwork and the foundation of trying to build something that would win for sustained success, and for us, it was very important to do that. I think Brian (Flores) and the coaching staff have done a great job of laying that foundation.

Q. You have a lot of money and a lot of draft picks to work with this offseason. Do you expect to spend the free-agent money this year big or are you going to invest it in the future and build with draft picks or both?

CG: Brian and I have had conversations with (Vice President of Football Administration) Brandon (Shore) and (Vice Chairman, President & CEO) Tom (Garfinkel) and the big thing for us is we’re going to be smart about it. We’re going to build it the way we feel right and yeah, we have money and cap space, but it doesn’t mean you have to spend it all. We’re going to try to bring in a lot of players here — good players here — and keep building the roster. We’ll be very smart in how we do it.

Q. I know a quarterback is going to be the topic that everybody wants to talk about. When you guys look at that from the draft and free agency standpoint, how do you look at what you need to do in 2020? Do you have to get a new one or do you look at it a different way?

Q. Is finding a franchise quarterback the priority?

CG: Like I said, it’s finding pieces everywhere. Again, I’m not trivializing the quarterback position. We’re going to investigate that hard just like every position in the draft and free agency.

Q. Do you anticipate QB Ryan Fitzpatrick and QB Josh Rosen coming back next season or being on your training camp roster at least?

CG: Yeah, right now. Fitz did a great job for us. Josh has worked hard, just like Brian has been saying. We see improvement every day in practice and his growth, so yeah, we’re excited about both of them.

Q. How high on the list is upgrading both lines? Do you feel like you need multiple new offensive line starters?

CG: Again, we’ll go through the process here. I think we want to get better everywhere. It’s not just O-line, D-line. It’s all positions.

Q. How do you view the QB Josh Rosen trade at this point? Can you consider that a success?