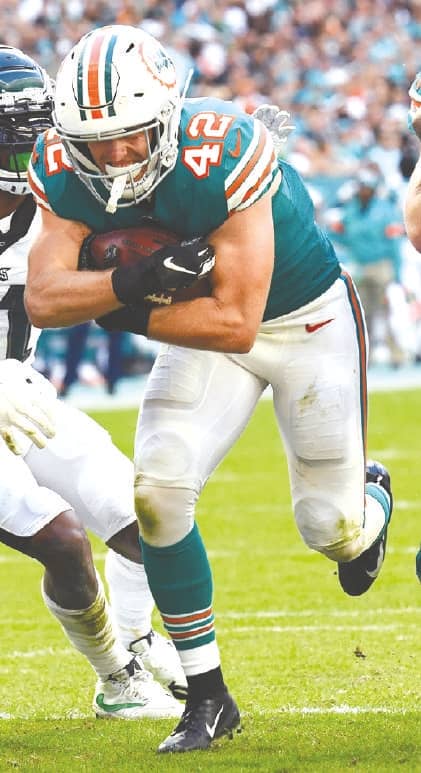 Breaking down every player on the 2019 roster
ALAIN POUPART

With the 2019 season now over, we examine the contributions of every player on the season-ending roster as well as their status with the team moving forward. Players are listed alphabetically by position and include those who finished the season on injured reserve.

RYAN FITZPATRICK — Fitzpatrick was the perfect quarterback for a young team desperate for leadership at the quarterback position. His final numbers weren’t overly impressive, but they don’t tell the story of what he meant to the Dolphins in 2019. It’s certainly possible he’ll be back in 2020. JOSH ROSEN — There’s no polite way of saying it other than to point out that Rosen was a disappointment after coming over in the trade with the Arizona Cardinals because it soon was apparent he’s still a long way from a finished product.

KALEN BALLAGE — After an impressive training camp, Ballage put up historically poor rushing numbers. No doubt he was hindered by shaky blocking up front, but he’s got to take some of the blame as well. He should get another shot but needs to take a big step forward in 2020.

CHANDLER COX — One curious thing that happened in 2019 is how little the Dolphins used Cox on offense considering they spent a seventh-round pick on the fullback from Auburn.

MYLES GASKIN — Gaskin had to stay patient until he got his shot and he had some flashes before he ended up on IR with a leg injury. He should get another chance next summer.

PATRICK LAIRD — One of the feel-good stories, Laird made the roster as a rookie free agent and then proved a steady, reliable back. While he’s not flashy, he’s the type of player who’ll be in the NFL for years.

SAMAJE PERINE — Picked up off Cincinnati’s practice squad late in the season, Perine is an intriguing prospect, though he’ll be a restricted free agent in the spring.

DE’LANCE TURNER — Signed off the Balti more practice squad, Turner got pretty much all his work with the Dolphins on special teams and remains an unknown commodity.

TREVOR DAVIS — Davis was claimed off waivers from Oakland in early December and his action with the Dolphins was limited to returning kicks in the finale. He’ll be a restricted free agent in the spring.

ISAIAH FORD — Ford jumped from the practice squad to the active roster in 2019, but he came through pretty much every time his number was called. His biggest problem moving forward remains the team’s depth at wide receiver. 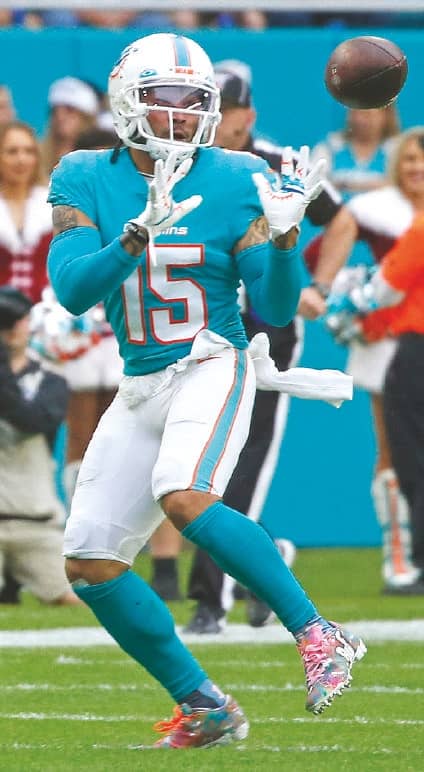 JAKEEM GRANT — It was an up-and-down year for Grant, who got a new contract but then had limited production and injury issues. He did have another kickoff return for a touchdown.

MACK HOLLINS — Picked up from the Philadelphia Eagles in early December, Hollins had a very limited role with the Dolphins.

ALLEN HURNS — The former University of Miami standout joined the team right at the start of training camp and became a reliable enough receiver that he landed a contract extension.

GARY JENNINGS — The 2019 Seattle Seahawks fourth-round pick was an interesting pick-up off waivers, but he was injured before he could show much with the Dolphins.

RICARDO LOUIS — The former Miami Beach High standout was hurt in the spring and spent the whole season on IR. He’ll be an unrestricted free agent in the spring.

DEVANTE PARKER — After four years, Parker showed the vast talent that had made him a first-round pick in 2015 and it coincided with him being in the lineup all 16 games. There weren’t many wide receivers around the NFL better than him down the stretch.

PRESTON WILLIAMS —Before Parker took off, Williams was the Dolphins’ best wide receiver, a pleasant surprise out of the rookie free agent. If Williams can make a successful recovery from his torn ACL, the Dolphins could find themselves with a dynamic wide receiver duo with him and Parker.

ALBERT WILSON — Wilson spent much of the season trying to regain the form he showed before his hip injury, though he came on at the end. The big issue looking ahead is Wilson’s contract, which makes him a logical candidate to be released if he’s unwilling to restructure his deal.

MIKE GESICKI — Among the highlights of the 2019 season was Gesicki’s emergence in the passing game. The second-year tight end became a weapon in the red zone.

DURHAM SMYTHE — It was Smythe, and not Gesicki, who was the main starter at tight end and that was a nod to Smythe’s superior blocking. But Smythe wasn’t much of a factor in the passing game.

CLIVE WALFORD — Walford was waived-injured before returning to the Dolphins midway through the season and had some moments in the passing game. The former UM standout will be an unrestricted free agent in the spring.