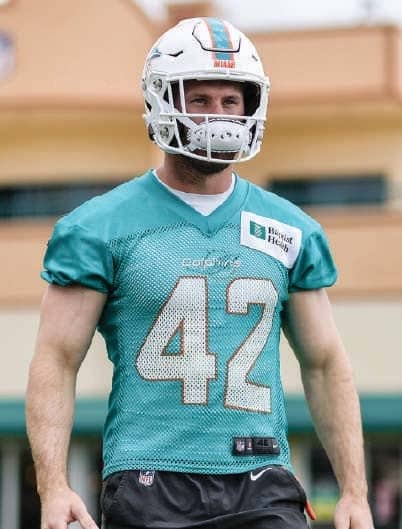 The Miami Dolphins have eight captains for the 2020 season and, as a sign of the changing look of the roster, five of them are newcomers.

The five newcomers elected captain in a vote of the players are center Ted Karras on offense, linebackers Kyle Van Noy and Elandon Roberts on defense, and Clayton Fejedelem and Kavon Frazier on special teams.

It's interesting to note the Dolphins had only four captains last season, with McCain being one of them. The others were two players no longer on the team, center Daniel Kilgore and special teams standout Walt Aikens, as well as linebacker Jerome Baker.

It's also clear there's a Patriots influence at play here, since three of the captains are newcomers who came over from New England: Karras, Van Noy and Roberts.

“It’s funny, you wake up one day and then after free agency and whatever and you’re like, ‘Wow, I am the oldest guy’ or the most experienced, I guess, in the room,” Davis said early in training camp. “You kind of have to put yourself in that mind-set of, ‘I’m going to be the leader. I want to be the leader. I want to have my guys. I want to have somebody they can lean on when things are hard or advice with anything.’ ”

The Dolphins practice squad included two very interesting names when they faced the Buffalo Bills in Week 2, though technically one of them wasn’t exactly on the practice squad roster.