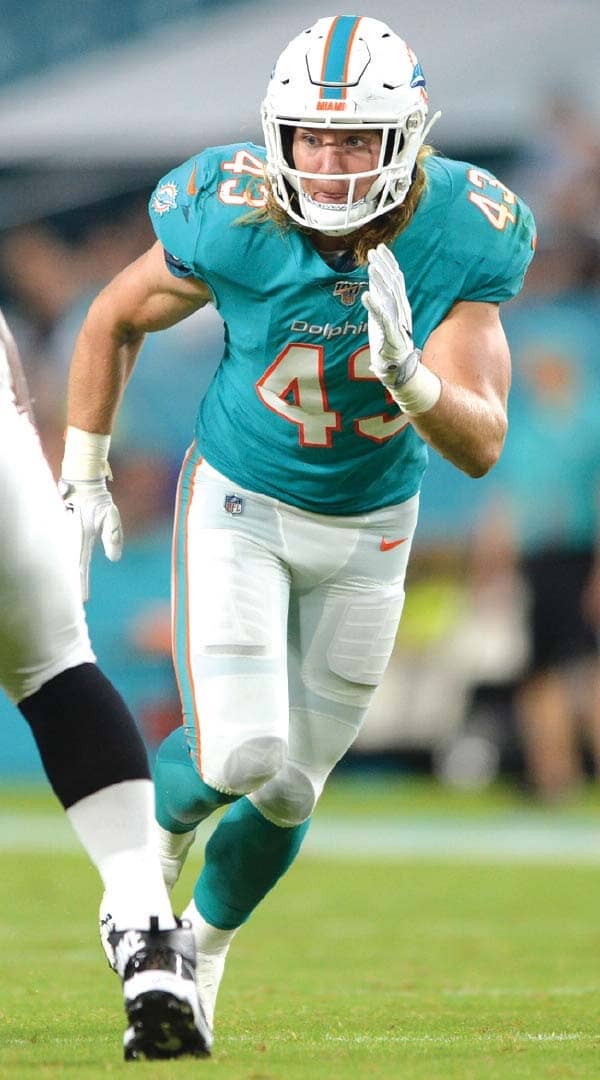 Jerome Baker — The 2018 third-round pick returns for a third season after leading the team in tackles last year.

Vince Biegel — Biegel showed promise last year after coming over from New Orleans in a one-for-one trade for Kiko Alonso.

James Crawford — Crawford returns for a second season after landing on IR after three games.

Sam Eguavoen — Eguavoen showed flashes in his first season after coming over from the Canadian Football League.

Kamu Grugier-Hill — A free agent pick-up from Philadelphia, Grugier-Hill could help on defense and on special teams.

Trent Harris — The former University of Miami player joined the Dolphins after being picked up from the New England Patriots.

Kylan Johnson — The former University of Florida and Pitt player was the only linebacker the Dolphins signed as a rookie free agent.

Raekwon McMillan — The 2017 second-round pick continued his progress last season before ending the year on IR.

Calvin Munson — The former New England practice squad player started both games he played after the Dolphins signed him in December.

Elandon Roberts — Roberts joined the Dolphins as a free agent after starting 33 games in four years with New England and scoring a touchdown in the 2019 season finale on a reception from Tom Brady.

Andrew Van Ginkel — After spending the first half of the season on injured reserve with a foot injury, the 2019 fifth-round pick came on down the stretch.