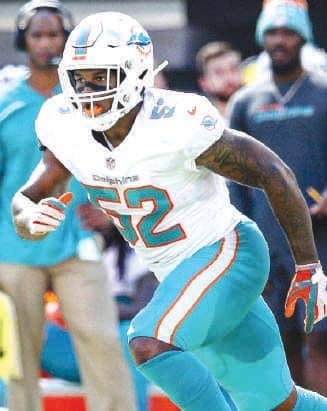 The Dolphins did a lot of work on Lynn Bowden Jr. before the 2020 NFL draft, intrigued by what he could bring to the offense based on his athletic ability and his background as a college quarterback-receiver.

The Dolphins eventually were able to get their hands on Bowden, but it came as the result of a trade after they gave the Las Vegas Raiders a fourth-round pick in the 2021 draft for Bowden and a conditional seventh-round selection.

The fourth-round pick actually was the same one the Dolphins had acquired from the Raiders nine days earlier in a trade that sent fourth-year linebacker Raekwon McMillan to Las Vegas.

Before acquiring Bowden, the Dolphins already had the same type of player on the roster with former Navy quarterback Malcolm Perry, who they took in the seventh round of the 2020 draft.

If they want, the Dolphins now have two players other than quarterbacks Ryan Fitzpatrick and Tua Tagovailoa who could take snaps in 2020, which is something they did last year with running back Kalen Ballage.

The difference is that Ballage never was a quarterback in college like Perry and Bowden.

The hope is that Bowden and Perry can bring another dimension to the offense, though head coach Brian Flores cautioned — as he often does — against expecting too much too soon from the two rookies.

Though a story on The Athletic website suggested there were issues with Bowden not taking his job seriously enough, Raiders GM Mike Mayock insisted the trade was purely a football decision made because Bowden couldn’t make a smooth transition to running back.

“Number one, it was a football decision only,” Mayock told Raiders reporters in a conference call. “Character, off-the-field, the kid did absolutely nothing wrong. We did all our homework on the kid off the field. He worked his tail off. He came to work every day. So this was completely a football decision. It had nothing to do with anything else.