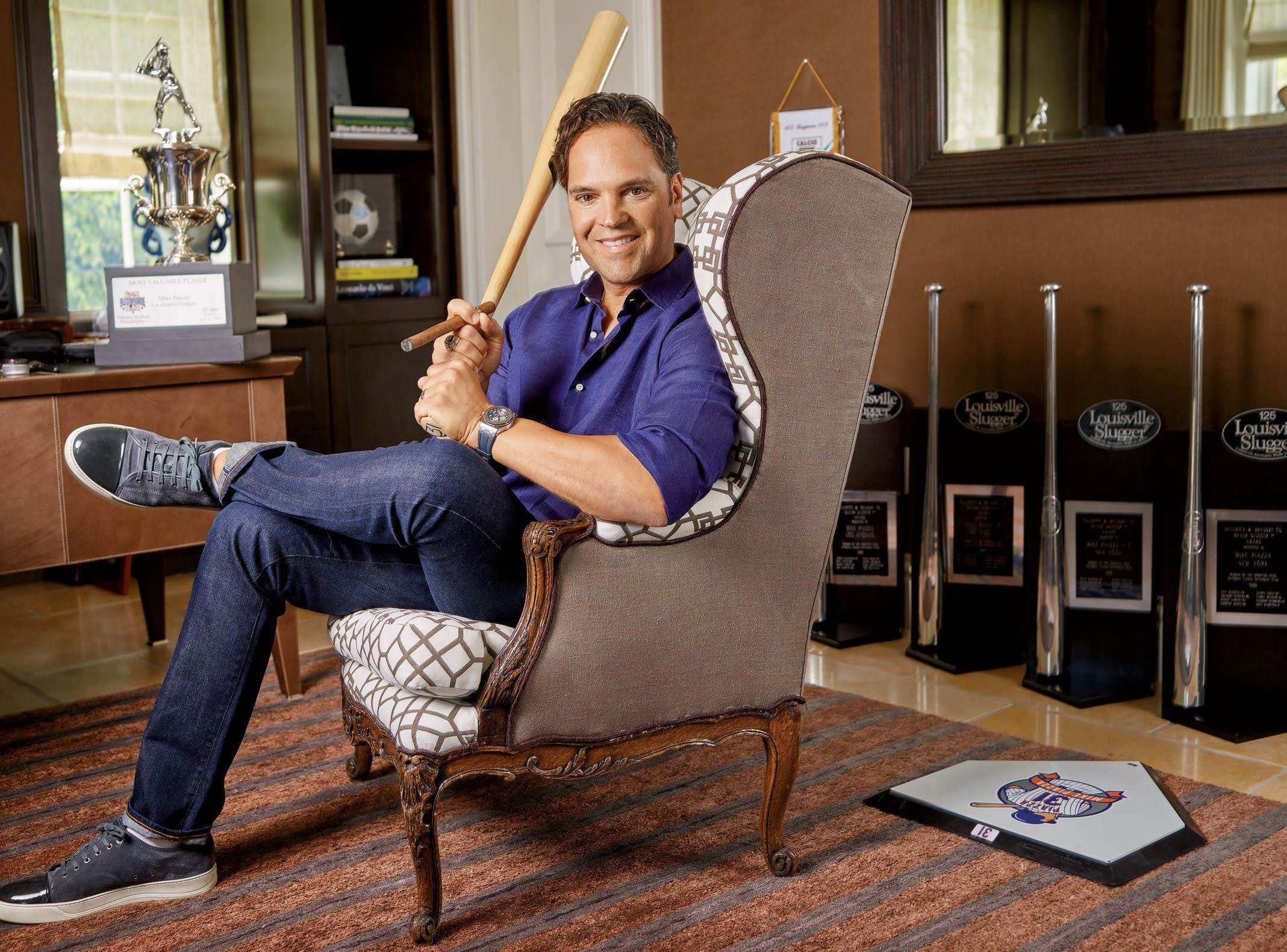 How Mike Piazza went from overlooked first baseman to the best-hitting catcher ever.

Mike Piazza is storming. He is part owner of AC Regiana 1919, an Italian soccer team, now losing to Bissano Virtus 1-0. “It’s the 53rd minute,” he fumes, looking at the TV screen behind his desk and pacing across his home office. In jeans and a pullover shirt Piazza is muscular. Even as he enters the Hall of Fame, his build is indistinguishable from the 6-3, 200-pound frame of nine years ago, when he played his last major-league game. His newly boyish face—clean-shaven and friendly, vulnerable and less hidden—makes it difficult to summon those mental images of years past: from mustache to goatee, from brown locks to blond. Running five miles a day in South Beach has left him tanned and more youthful than the 49 years the calendar shows.

Behind him stand 10 Silver Slugger awards, one for each season that coaches and managers recognized him as the best offensive player at his position. The title “best-hitting catcher of all-time” is now synonymous with his name. Now, during breaks from his Steinbrenner-esque rants at his soccer charges, Piazza reflects on his prior life. His baseball life. That drama spanning three acts—his youthful obsession with pounding a baseball, the $15,000 signing bonus that began his 16 seasons in the sun, and his Hall of Fame election in 2016—has spawned an opulent existence in South Beach, Florida, a life of family and faith, professional team ownership and golf. And cigars. A curious blend of truth seeker and engaged citizen, husband and father, Piazza is nothing if not a former ballplayer refreshingly off the beaten track.

He leaves the office and returns with an unopened box of Partagás Lusitanias—which he stores in his refrigerator. “They were vacuum packed in Switzerland,” he says. “They are bold, but I wouldn’t say like nuclear strong.” Smoking will commence later, in his front yard, looking past his swimming pool and royal palm trees touching Biscayne Bay.

Life has been good. A sweaty sojourn through minor-league towns and, then, buoyed by the unflagging praise of Tommy Lasorda and Dodger coach Reggie Smith, Piazza landed as a throwaway pick—No. 1,390 in the 62nd round—in the 1988 draft. No wonder his autobiography is titled Long Shot.

Michael Joseph Piazza was born in Norristown, Pennsylvania, but grew up in nearby Phoenixville, a suburb of Philadelphia. His father, Vince, played baseball till junior high and faced his own long odds by being a left-handed shortstop. He gave up his hope of playing the game, leaving school to support his family. He caddied at the golf course where his father worked maintenance. He pumped gas. He rose before dawn to deliver the Philadelphia Inquirer. He pieced together a life.

Later, his ability to fix junked cars led him to open a car dealership with a friend Bill Garber. Garber was a friend of Lasorda, who hailed from nearby Norristown. After playing big league baseball, Lasorda was now scouting for the Dodgers. Eventually Lasorda was named a manager in the Dodgers’ minor-league system and then for the big-league team. Whenever the Dodgers came to play at the Vet in Philly, Vince, Tommy, players and coaches piled into cars and headed for the Marchwood Tavern, an Italian restaurant that the Lasorda brothers opened in Exton.

Vince infected Mike, the second oldest of his five boys, with his love of baseball. His mother, Veronica, said he could play on Sundays as long as he attended church first. Vince threw several hundred pitches an evening to his son. Then came the mattress he leaned against the basement wall, into which Mike fired baseballs. His father got traffic cones to use as batting tees. “When I got to be 11 he said, ‘Do you really want to do this seriously?’ I said ‘Yeah.’ He said, ‘If you do, you have to practice.’ So that is when he got me the cage, and the JUGS machine, with an automatic feeder. The machine was rigged so that pitches came out every six seconds.” The machine spit out hard stuff, but inexplicably floated up the occasional knuckler. “Eventually we added a roof on it,” Piazza says, “and a heater.” The contraption was so enormous that it attracted a zoning inspector, who asked what it was. “It’s my son’s ticket to the big leagues,” Vince snapped.

But no one expected a certain guest who showed up to watch him hit one day. “Tommy was good friends with Ed Libatore, a scout for the Orioles,” Mike recalls. “And Libatore was good friends with Ted Williams and Joe DiMaggio. He would get them signing gigs. Back then there wasn’t really any science to it. The guys would come in and sign for 10 grand or something. It was all cash. They would call and say, ‘Hey Ted, you wanna do a card show?’ And he would come up from Florida.” One day, Vince Piazza was at the card show and told Williams about his son’s hitting. The Red Sox legend asked if he could come over to the cage and see Mike’s swing, and Vince replied “Are you kidding?” He picked up Williams at a nearby hotel and brought him to their house.

“This kid looks good. He really looks good,” Williams said in his husky John Wayne accent, standing near the cage. “I’m not kidding. This kid hits the ball harder than I ever did at 16.” Mike Piazza is still dazzled by the event. “Here’s this larger-than-life figure. He said ‘You look great, but that’s only half the battle,’ ” Mike recalls. “He said the rest is pitch selection, knowing your strike zone, hitting the ball where it is pitched, reacting to situations, and off-speed stuff. It just kind of seared in my memory.”

Suddenly Piazza lets out a rebel yell—Regiana has tied the game. “Yea-a-a-a-h, yeah!” he screams. “They scored in the 93rd minute.” He scoots out, past the dining room and out of view. He returns clapping his hands, loudly, as if hoping the sound will cross the Atlantic and inspire his youthful charges fighting on the field 5,000 miles away. He expects the game will end in a 1-1 tie, even with the inscrutable randomness at the close of soccer matches, when referees add “injury time” on a whim. But then, Regiana’s defense is penetrated and Mike screams “Get it out of there!” The enemy scores. “Fuck!,” he yells, and this fresh occasion for disgust has him storming off again, tearing out of the office and out of sight. He returns. “Oh man, that hurts.”