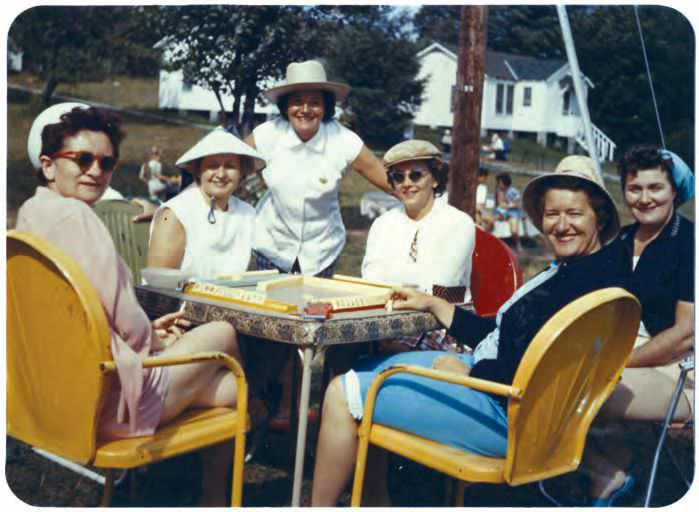 I remember mah jong through a haze of memory and my mother’s Benson & Hedges cigarette smoke. The mysterious ivory tiles, abundant in number and exotic in design took center stage on a card table in our living room, set on long, sleek wooden racks with surplus tiles stacked in rows and others spilling into the table’s center.

Four ladies perched around the table, while one ethereal “floater” flitted around them, positioned behind any player she wished to observe. As the ladies played they talked and laughed, filling ashtrays with lipstick-stained cigarette butts, munching on Planter’s Peanuts and M&Ms, which were offered in candy dishes set on nearby side tables.

These ladies who visited for mah jong were not part of my mother’s usual crowd, which was made up of immigrant Polish Jews who lapsed from English to Yiddish to Polish in one sentence, who were always with their husbands. These ladies were American. They went out on this night without their men and enjoyed the company of women, risqué enough even to gamble, albeit for pennies. Politely, they said hello to me, but they really just wanted to play the game, not waste time with my sister or me. We were dismissed, unable to watch our customary shows on the living room TV, and sent to bed where we listened to the cracking of the tiles, the excited tones of the voices of the players, and the most mysterious of all, their incantations, one bam, two crack, three dot, east, west, dragon, and finally, victory, mah jong!. 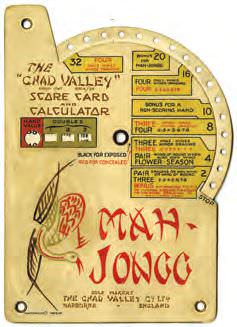 The ladies were bold, going out at night and leaving their own husbands and children, crossing occidental world barriers by playing an Oriental game.

ONE BAM, TWO CRAK, MAH JONG IS BACK!

For those who have not yet become exposed to its enticing powers, mah jong (also spelled mah jongg) is a fast-moving game of skill, played by four people who compete against each other to create a very specific combination of tiles to make a “hand.”

To win once, one can be lucky, but to win consistently over time, one must be quick, clever and adept enough to change strategy as fast as the ever-changing play demands. A player wins by picking and discarding the tiles to create a sequence of patterns specifically matched to one of 52 hands.

It’s not for the faint of heart. The alluring game has captivated players for centuries. The tiles are artful and elegant. When mixed and organized for play they have a distinctive and inviting clatter. But the most important reason why the game is so popular is simply because it is so much fun. The game is a very social, engendering interaction and cooperation amongst the players around the table, who support each other and take pleasure (mostly) in each other’s victories. It is not unusual to find people who have been in games together for decades.