'Part Of My Heritage Is To Give Back….' 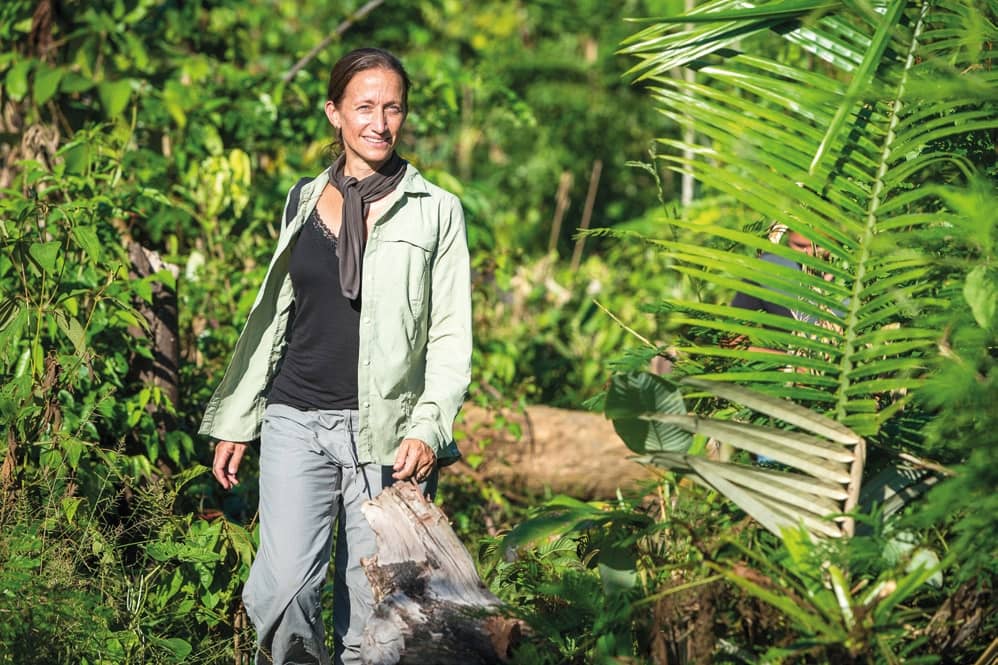 Documentary film-maker, adventurer, jewellery designer and public speaker Céline Cousteau speaks to Shirin Mehta of her recent India visit as an ambassador for The TreadRight Foundation. She tells us about exploring and filming the deep Amazon and its indigenous tribes and being on the research vessel Calypso with her legendary explorer-oceanographer grandfather, Jacques Cousteau...

The telephone line connects us over time zones…. The voice at the other end is faint, but I am excited to hear what it has to say. I have already formed a deep admiration for the courageous lady who is probably just getting herself her morning cuppa — intrepid explorer, film-maker, saver of the environment. Céline Cousteau and her documentary film company CauseCentric Productions (CCP) provide “a megaphone” in her own words, to men and women who are doing incredible work to protect ecosystems, species and people. very often with hardly any, or no resources at all….

Telling stories with the specific intention of igniting action, Cousteau urges that everyone be ‘causecentric’ and lend a hand to those with a message to share. Having inherited Jacques Cousteau’s (French explorer-film-maker-scientist and her grandfather) spirit of adventure, she travels to melimoyu Bay in Chile capturing the narrative of this diverse ecosystem and the organisation protecting it, the melimoyu ecosystem research institute (meri). She visits with the non-profit mesoamerican reef (mar) Leadership Program which approaches conservation through ‘intelligent investment in people’. in India, she works with elephant conservationists and recognises the problems of survival for these animals. She traipses through fjords. She dives into secluded lagoons. She traverses giant rivers. and all this, sometimes, with her young son (now seven) in tow….

excerpts from a conversation with Verve….

Could you tell us about CauseCentric Productions (CCP)?

Sure, so CCP really began with recognising the need to create short visual content for smaller organisations and individuals who are doing great work in the world, but don’t necessarily have the funding or the time to put together a visual communication tool to tell their stories. I wanted to support and give back by creating these short stories. it was started as a non-profit organisation, and eventually we created The Céline Cousteau Film Fellowship. We have currently been concentrating all of our efforts on the film, Tribes on the Edge.

What is this impact campaign about?

It is three different initiatives — action, communication and education. For the action component, there are tangible projects that we will be putting into place with the guidance of the indigenous people in the Brazilian amazon; we will work with them to create a strategy plan for the implementation of the projects and solutions for some of the issues they face. The communication initiative is about creating dialogue by sharing the film, and the media and Pr campaign to highlight the challenges faced by the indigenous population of the Javari and amazon. The third component, education, has reached over 4,500 students in more than 40 countries by simply using tools like Skype and google Hangouts. it’s taught them a little bit about the importance of indigenous people as the guardians of the rainforest, the importance of biodiversity in the amazon and why it matters to us.

Is this what brought you to India?

No actually…and I hope I will have to come back, because I’ve seen so little of the culture and the country. The possibilities, I think, are so vast.… What brought me to India was my relationship as The Treadright Foundation ambassador. This is the charitable arm of The Travel Corporation — a very large company of travel brands — and I am on their advisory committee and their spokesperson for the efforts they support around the world. if you take a quick look on their website, you’ll see some of the extensive work that’s been done; they want to support the people and the wildlife in the places where these travel companies take their clients. So there are projects to support artisans and women’s co-ops; in India the work is with Wildlife SOS, which is an elephant rescue and rehabilitation centre.