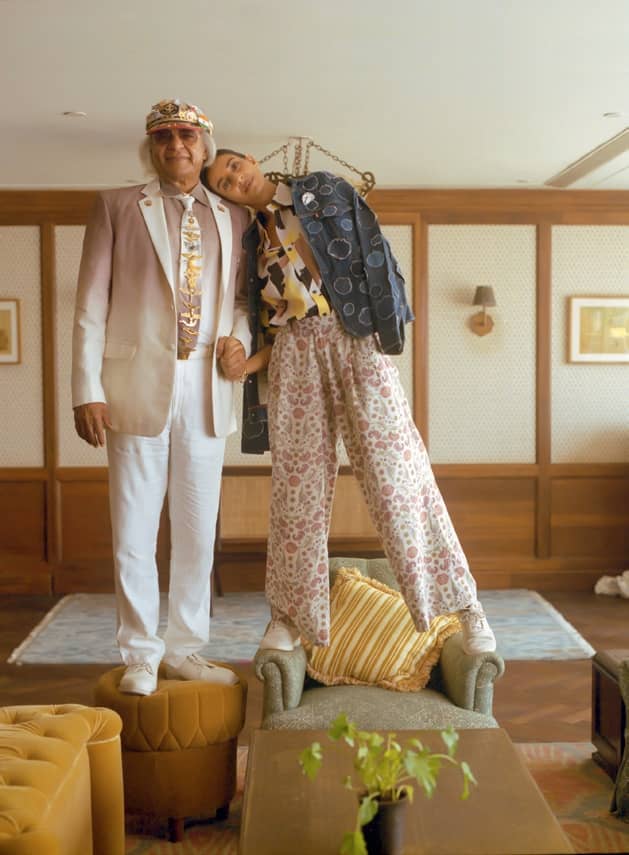 Creative consultant Ekta Rajani and businessman Suresh Rajani may share the same blood, but their approaches to style are hardly related. The daughter’s downsized and minimalist-yet-original wardrobe has inspired young consumers to re-evaluate their purchasing patterns, while the equally couture-conscious father follows a more outlandish school of fashion. Sadaf Shaikh spends a day observing the pair’s tailor-made modes of self-expression

I may not have known it when I woke up one morning a few weeks ago, but I would be recounting that day to friends and family for a long time. I received life lessons, was serenaded with songs, attempted a new dance, witnessed a charming father-daughter bond and learned a thing or two about the acceptance of differences, all within six hours.

I anticipate none of this as I navigate Soho House Mumbai’s cosy, labyrinthine interiors to locate the Eva Room where we’re shooting. When I set foot into the space, the gorgeously designed interiors, multiple racks of designer clothes and expanse of sea that faces me pale in comparison to the imposing figure standing in the middle of the room — a towering man dressed all in white, who is calmly watching the creative crew bustling around him. I have seen Suresh Rajani before — although from afar — at this year’s Lakmé Fashion Week, when he was happily trailing his creative consultant daughter as she flitted from one show to the next. And even though Ekta Rajani warranted my attention first, due to her position of value in the fashion fraternity and the fact that I’ve worked with her in the past, I could not take my eyes off her father. This was a man who had turned up at the country’s premier fashion event in naval-inspired, highly atypical finery from top to bottom, complete with polished white oxfords and a peaked cap. As if that wasn’t enough of a detour from the usual designer-heavy looks served at fashion weeks, there were a hundred (if not more) badges pinned to his shirt and cap, all of them modelled after military ships, honorary seals, submarines and fighter aircrafts. He even carried a naval baton to drive home the point that this wasn’t an ephemeral obsession. His daughter, on the other hand, was the picture of off beat minimalism; months of attempting to emulate her effortlessness had led me to conclude that she was the only person I knew who could pull off print-on-print ensembles with enviable ease. I was happy to miss a few of the shows if it meant that I could get the two to explain this evident juxtaposition of aesthetic sensibilities. But before I could walk over to them, they had already mysteriously disappeared; Ekta was probably off averting some last-minute crises before models took to the runway. 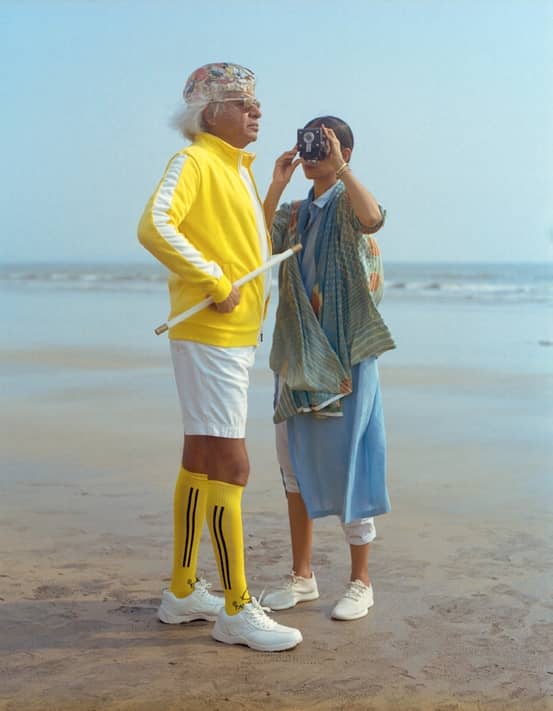 But through pure serendipity, I get to interact with them in close quarters today. Suresh beams when I introduce myself as the person who will be writing this story, but his face settles into a frown when he looks around the room and realises his daughter is yet to arrive. “I’m sorry; could this wait until Ekta comes?” he sheepishly says. A bubble of laughter escapes my lips, but I can’t say I don’t understand his dilemma. After all, isn’t every father helpless in front of his daughter, especially after she’s old enough to make her own decisions? “Don’t worry, I’ll keep it clean and uncontroversial, I promise.” So I start with what I hope is a relatively harmless question. How did a simple businessman working in hydraulics elevate his style quotient so dramatically? “It was something I was born with, I guess”, the 71-year-‘young‘ Suresh responds. “When Ekta’s brother was a little baby, I specially purchased jersey material, designed identical t-shirts for both of us and asked my local tailor to bring my vision to life. Everything I’m wearing right now is also self-designed. Like Ekta is a stylist, I consider myself one too. The only difference is, I’m my only client. When I go for walks on the beach or for marathons, I wear bright stockings and matching arm socks, caps, aviators, gloves and shoes. I wear a shirt with a bit of an ombré effect to office as a welcome deviation from the standard corporate attire. I don’t know why people don’t put more effort into styling themselves, especially when they’re getting old. That’s when you’re supposed to be dressed to the nines at all times because God could invite you to meet him at any point. How could you not be well-dressed for the interview of your lifetime?” I’m momentarily stunned — I wasn’t quite expecting theology to become a part of this interview, but now that we have broached the subject, I’m not inclined to skirt it. I prod him, and “Captain” Suresh (as he likes to be referred to), doesn’t shy away from elaborating. “It’s not really about religion though. I’m more of a spiritualist. I have a few principles about leading a happy life, and they’re quite simple. I believe that when people stumble upon a regular man dressed in a navy uniform with badges and a baton, they might think he’s eccentric, but they won’t be able to deny that he’s a cheerful man. A sad soul won’t put so much effort into dressing up, and every day at that. If I see you sitting in a coffee shop and reading a book, dressed the way you are right now, I won’t be able to tell whether you’re happy or sad.”