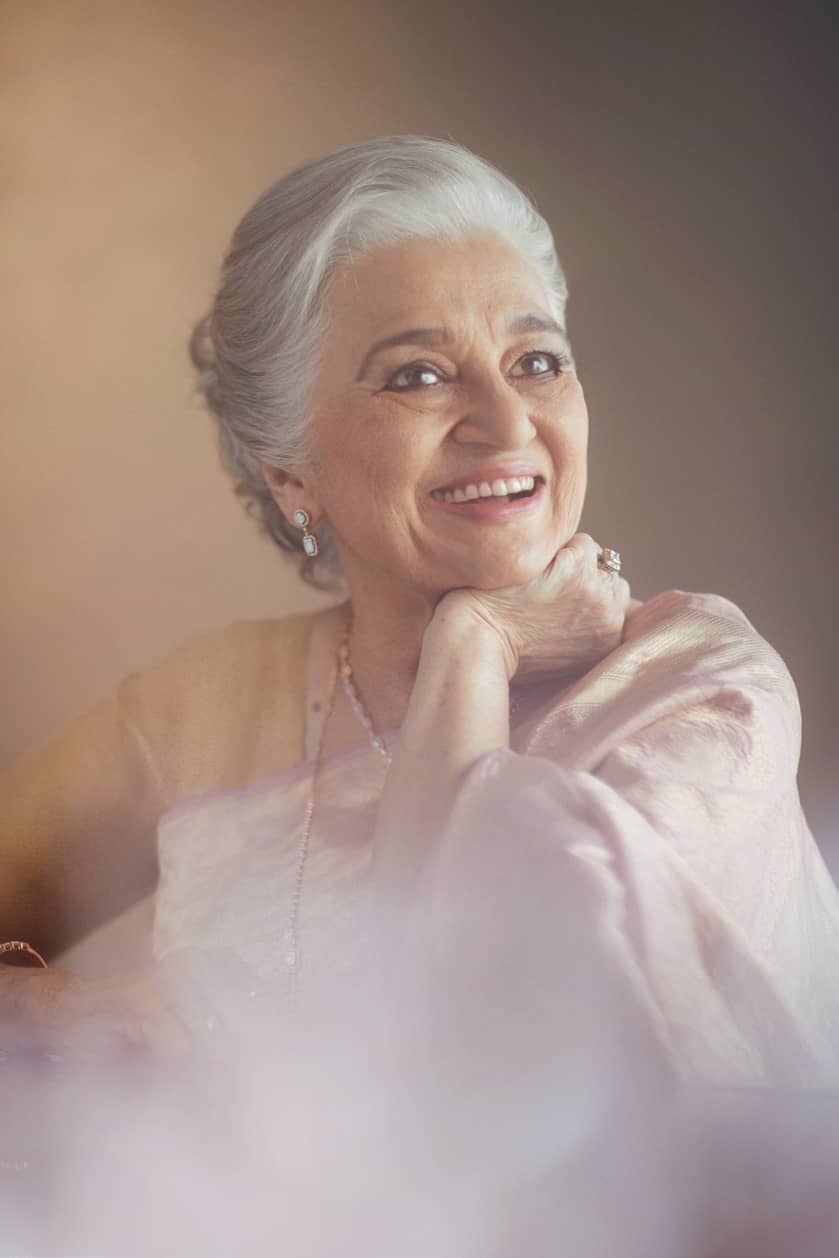 At a time when unmarried women were the exception, ’60s superstar Asha Parekh defied the norm and rejected a long list of suitors. Bollywood history rookie and the soon-to-wed Sadaf Shaikh reconciles her 21st-century feminist ideology with the still-single actor’s understated iconoclasm as their conversation elides the 50 years between them…

A day before I am scheduled to meet Asha Parekh, I undertake the ambitious task of reading her biography overnight. Once I am through and tucked into bed, Parekh makes a surprising appearance in my dreams. I say surprising because I haven’t watched a single Bollywood movie that released before I was born in 1992 — not even Sholay — which means all my sleep-induced visuals are byproducts of my memory of the few images I came across while perusing Khalid Mohamed’s labour of love, The Hit Girl, which chronicles the actor’s eventful life. When she infiltrates my REM stage, however, Parekh is not the present-day thespian that would greet me at her roomy Juhu residence the next day but the doe-eyed, bouffantsporting star in her prime, who could disarm men with a smile and dance like a celestial apsara. That’s not to say she isn’t as beguiling today as she was 40 years ago; I am instantly in awe of her, before I even cross the threshold, as I take in her sharp eyes, sincere smile and dulcet voice. Parekh ushers me into her home, and there is absolutely no indication of her celebrity status, especially not as she lifts a seemingly heavy floor fan all by herself and places it in my direction to give me some respite from the sweltering October heat. Seated across from her, I can easily see why she was the highest-paid and most successful actor of her time. I, for one, would’ve liked to witness her in action during her glory days, and while The Hit Girl has allowed me a momentary glimpse into her life — turning points, unrequited love, regrets and all — it is a whole other experience to listen to her recount the events firsthand. “The images turned out rather well, don’t you think?” Parekh is beaming at me, and I snap back to the present as I realise she’s referring to the previous day’s shoot.

I haven’t had a chance to see them yet, but it doesn’t matter because I am already biased; it’s impossible for Parekh to look anything but timelessly gorgeous. Could that be why she never married? I ask myself as my restless mind wanders. Did no man ever match up to her standards? Did her reputation and beauty intimidate prospective suitors? When I pose these questions to her, she smiles at me sagely. “Staying alone was probably one of the best decisions I made. I was in love with a married man and didn’t want to be a homewrecker so, in retrospect, it was the only choice I had, according to the way I wanted to live my life,” she says matter-of-factly. I find myself agreeing with her, even though my 27 years of experience have nothing on her illustrious 77. Until earlier this year, I had completely sworn off marriage, not because of a dearth of good men, but simply because I didn’t have room in my life for a partner and the co-dependency that came with one. It was only recently, when I unwittingly fell for my best friend of 10 years, that my stance on romance changed, and I decided to abandon the enticing throes of singledom. “You see,” Parekh says knowingly, “Time and circumstance are everything. You can’t stop what is meant to happen, and you can’t force what isn’t fated to occur.” I smile in spite of myself; this is exactly the kind of thing I’d expect my grandmother to say as she tightly braids my oil-drenched hair. She continues, “But I hope you know you’re signing up for a life of endurance. Men can be temperamental, and you have to learn to be the balancing force in this relationship. During my time in the industry, there were instances of star couples having trouble in their marriages because the men used to philander. It was the women who chose to stick by them even though they knew the kind of shenanigans their husbands were up to.