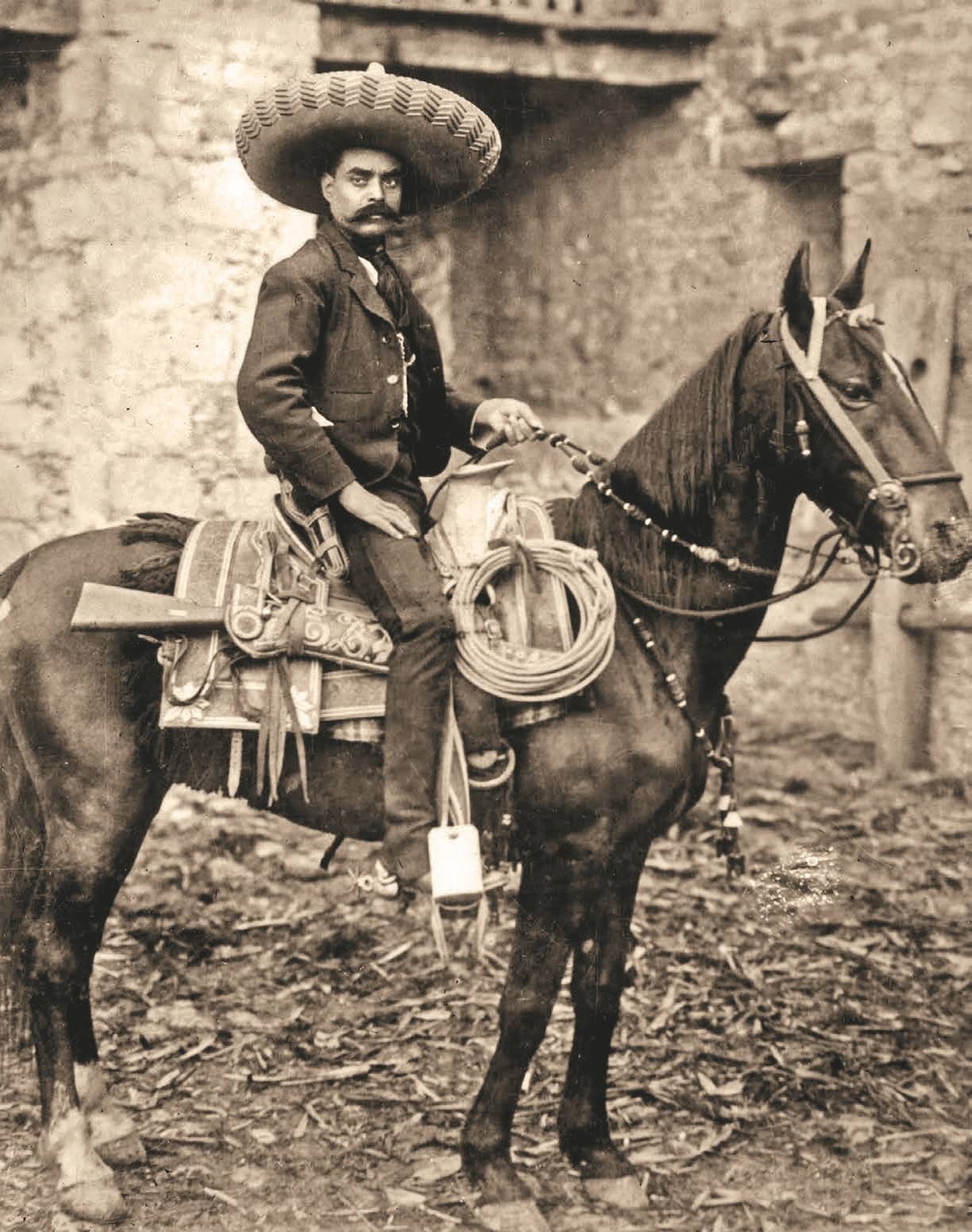 A CENTURY AFTER THE END OF THE MEXICAN REVOLUTION, REVOLUTIONARY EMILIANO ZAPATA STILL INSPIRES POLITICAL REFORM AND JUSTICE.

In 1909, at the age of 30, Emiliano Zapata was elected village chief of his native Anenecuilco, a village in Mexico’s state of Morelos. Zapata was highly regarded by his community for his prowess as a vaquero, and in his rise to fame and power as a revolutionary, he became identified by his sugarloaf sombrero and charro style.

The iconic pictures of the Mexican soldier and his soldadera wearing bandoliers embody the Mexican Revolution that began in 1910 south of our border. It ended ten years later, on November 30, 1920, after many military victories and political maneuvers, with the investiture of President Álvaro Obregón. But in September 1926, the New York Times reported that the Yaqui Indians initiated one of its last volleys, “kidnapping” Obregón on a train trip to Sonora. They had supported his revolutionary battles, but they now insisted he keep his promises to protect their land. Promises were made, but again Obregón fell short. Now, back to the revolution, what followed the initial proclamation were twists and turns that eventually pitted revolutionary against revolutionary: 10 long years with coups, civil wars, battles, assassinations and quite a few presidents.

CALL FOR REVOLT AGAINST DIAZ

In 1910 Francisco Madero made the call to arms. His best-known followers and the heroes of the revolution are Francisco “Pancho” Villa, leader of the Northern Army, and Emiliano Zapata, general of the Southern Army. They rose to back Madero in his struggle against the dictator, Porfirio Diaz, a conservative who supported the landowning elite and foreigners to the detriment of the Mexican middle class and poor, especially the Indians and landless peasants. This struggle had been part of Zapata’s life a decade before the revolution drew him in. To Villa, it was new.

In the southern state of Morelos, Zapata had years of experience fighting Diaz’s repressive actions. He had suffered at the hands of landowning hacendados, who wanted to control the land and water of the region (with Diaz’s help). He did not have to be told of the exploitation and suffering; he had felt it. With other peasant leaders, Zapata formed the Liberation Army of the South and marched to fight the federales, playing a major role in Diaz’s defeat. He participated in the pivotal southern Battle of Cuautla, which Diaz admits convinced him to renounce his presidency.

The Battle of Cuautla was especially difficult for Zapata, although his force outnumbered the federales ten to one. The elite federal force, of 300 to 400, was firmly ensconced in the town and at the highest points with machine guns— promising never to surrender. Zapata was used to guerrilla or fast attack tactics like his northern brother, Villa. Cuautla was a siege. Initially, several attacks were repulsed with a high casualty rate for Zapatistas. He lost more than 1,000 soldiers to machine guns and hand-to hand fighting against Diaz’s elite. Eventually, Zapatistas used petroleum to burn out many of the federales. Due to that, and to running out of water and ammunition, the elite survivors fled on May 21, 1991.

To the north, in the Battle of Ciudad Juarez in 1911, Villa, Madero and Pascual Orozco decided to lay siege to Ciudad Juarez. Madero, fearing U.S. intervention on its border, ordered a successful attack. Coupled with other defeats, a week later Diaz resigned and left for Europe.

Neither Villa nor Zapata had military training, so the victories were remarkable. Villa is often remembered because of his battles and “bandit-like” activities, mostly confined to Northern Mexico, including his incursion into the U.S. Villa is a controversial figure because of these activities. While publicly espousing the cause of the downtrodden peasants, many believe he joined the cause because he saw it as an opportunity to advance and was in it only for himself. None can deny, however, that he led the army to important victories that brought positive change. The fact that he robbed from the rich landowning hacendados, banks and train companies caught the attention of U.S. leaders, who called him a Robin Hood.