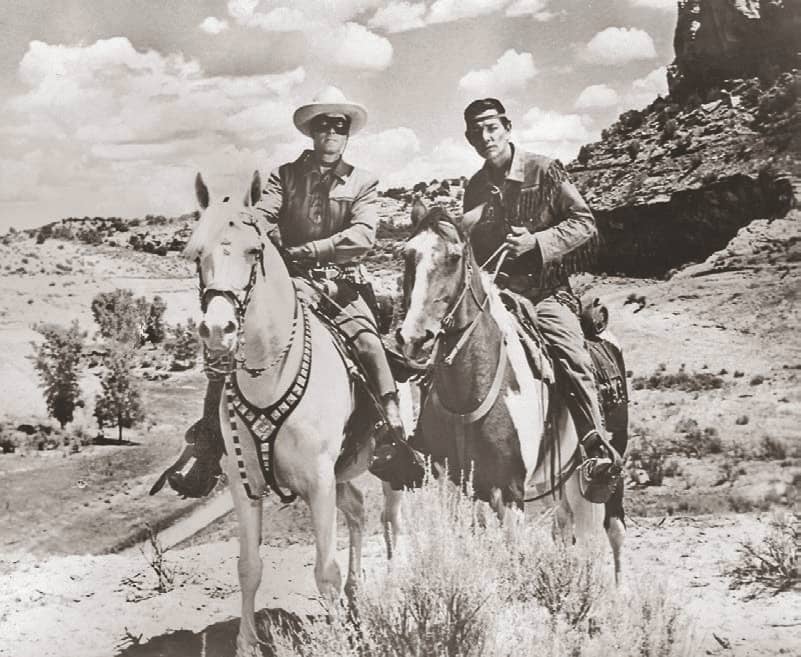 Of all the people the Masked Man and Tonto saved, the most crucial was Clayton Moore.

With the exception of one season, Clayton Moore starred in the title role of The Lone Ranger with his good friend and co-star Jay Silverheels as Tonto. The first original Western television series debuted in 1949 and was a primetime staple until 1957, after which it continued in syndication to entertain generations of fans.

This past September 2019, The Lone Ranger, TV’s first Western series, turned 70. Incredibly, every weekday an average of 16 of the 221 episodes are aired on various channels.

When actor Clayton Moore was asked to audition, he was already well-aware of the radio show which had begun in 1933. Clayton’s daughter, Dawn Moore, explains, “He listened to it with his own father. The Lone Ranger was already a beloved character in their house.”

Producer George Trendle and writer Fran Striker had co-created The Lone Ranger (although Trendle alone owned the copyright) and engineered the transfer from radio to TV. According to Moore, in his autobiography, I Was That Masked Man, Tonto was cast first. “No one but Jay Silverheels was considered to play Tonto.” Both men were physically up for their athletic roles that rarely employed stuntmen. Silverheels, a Canada-born Mohawk, had been a professional lacrosse player and Golden Gloves champion, and Moore had been a trapeze artist and acrobat. Both men’s acting careers began with bits in Poverty Row Bs. Silverheels had graduated to small roles in big films like Captain from Castile with Tyrone Power, and Key Largo with Humphrey Bogart. Moore had become “King of the Serials” at Republic. When, after a long interview, Trendle asked the actor if he wanted the role, Moore replied, “Mr. Trendle, I am The Lone Ranger.”

The Lone Ranger was John Reid, a Texas Ranger who was ambushed with five other Rangers, including his idolized older brother. Butch Cavendish’s gang thought they had killed all six, but Tonto found Reid and nursed him back to health. Tonto inadvertently gave him a new identity when he commented, “Now you lone Ranger.”