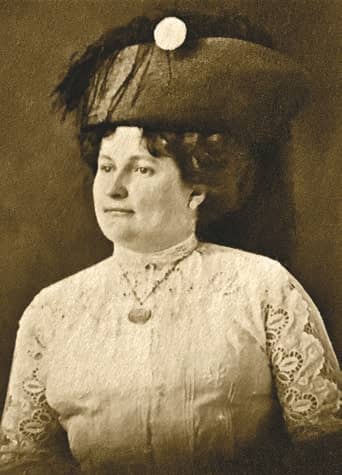 JAN MACKELL COLLINS
The only known portrait of Bertha, wearing a most fetching hat, was taken on a visit to California sometime in the early 1900s, when she was in her thirties.

Ten-year-old Laura Frazier gazed up at the large lady in the open door. “She almost filled the entire doorway,” Laura later remembered. The girl had talked her mother into letting her sell magazine subscriptions to earn money for a scooter. Little did she know, however, that the woman standing before her was Big Bertha, proprietress of the best-known parlor house in Williams, Arizona. “She kind of scared me, but I gave her my best sales pitch,” Laura said. “She opened the door and ‘scooped’ me inside.” Laura followed the madam to the kitchen. “Now honey,” Bertha said, “you just sit down and have a piece of cherry pie while I go find my purse.”

Bertha was kind like that. Born Cordelia “Cordie” Bell Curbow (aka Kirbo) in Georgia in 1881, the future madam moved to Texas as a child. She grew up learning the meaning of true Southern hospitality, a trait she carried with her even after she fled the Lone Star State following a short-lived marriage and the death of a baby. Life on the road was tough for any 17-year-old—especially Bertha, who first embarked on a career of prostitution in New Mexico Territory. While there, the girl shot a man over some unknown skirmish. Afterwards, the authorities “basically ran her out of town because she was underage,” according to Bertha’s great-great niece, Michelle Bowers.

For nearly 20 years, Bertha traveled from place to place, apparently changing her name as often as she changed her stockings. Not until 1917 did she resurface, as Cordie Kirbo, in Arizona. On November 1, she married Wiley “Whitey” Whited in Clarkdale. The union appeared blissful, but Bertha had dreams of her own. By 1923 she was running the Arizona Rooms in Miami, Arizona. The large wooden affair was not far from the town’s most notorious brothel, the Keystone Hotel.

Bertha preferred not to keep all of her eggs in one basket. In a 2012 interview, Laura Frazier Cole guessed that it was around 1924 when she met the madam in Williams, over 200 miles from Miami. Bertha may have firstworked for Longino Mora in the Tetzlaff Building, a brothel which is now home to a delightful bakery/bed and breakfast called the Red Garter Inn. “I was led to believe by an old-timer, Nick Otero, that Bertha was working in my building prior to getting her own house,” says the building’s current owner, John Holst. Laura said the Red Garter was called the Fashion Apartments when she was a girl, and that ladies of the night could be seen waving from an upstairs balcony in the evenings.