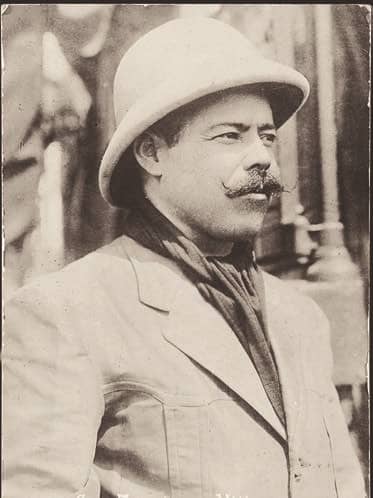 When “The Centaur of the North,” Pancho Villa, first met Emiliano Zapata in December 1914, he famously wore an English pith helmet (above), while Zapata wore his signature sugarloaf sombrero.

Although Pancho Villa—whose real name was Doroteo Arango—is the best-known figure of the Mexican Revolution, Villa would perhaps never have gained such recognition were it not for Porfirio Díaz.

In many respects, Díaz was an outstanding, accomplished president. To a large extent, he modernized the country, opened schools and encouraged business. One of his greatest achievements involved lacing the nation with railroads, which exposed the country to additional trade, particularly with its northern neighbor, the United States, a powerhouse otherwise known— and often feared—throughout Mexico as the “Northern Colossus.”

Despite his initial popularity, most historians today consider Díaz as corrupt as the government he led. Little economic improvement filtered down. While Díaz brought relative peace to Mexico, he also brought centralized tyranny.

As president of Mexico since May 1877 (aside from stepping aside for one term), Díaz found himself confronted by sporadic, northern Mexico revolutionary outbreaks in mid-October 1909. A year later, for Mexico’s celebration of its centennial of independence from France, President Díaz invited the world’s most powerful and wealthy to the capital, plying them with imported delicacies and pageantry. But this man, whose Mexican bloodline also was predominately Indian, ordered other Indians off the streets, lest their poverty offend visitors.

By early 1910, these outbreaks took place particularly across the Rio Grande from El Paso—the northern riverside neighbor of Juárez. From this Juárez borderlands would arise the intellectual and predominate storm center of the approaching Mexican Revolution.