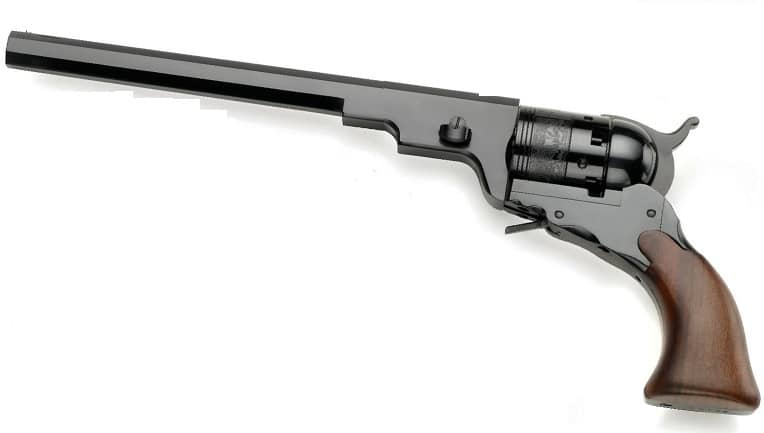 This EMF Co. replica of the Paterson Colt, with its unique folding trigger, and the stagecoach robbery scene roll engraved on the cylinder, is an accurate, working reproduction of the gun that revolutionized revolvers for all time. Despite a lack of sales of the original Paterson Colt to the general public, praise from the Texas Rangers and U.S. Army officers fighting in the swamps of Florida, proved that inventor Samuel Colt had the right idea.

Although the percussion ignition system, often called “cap and ball,” only reigned for about 45 years (roughly 1820-1865—the shortest lifespan of any firearms ignition system), this period has captured the imaginations of gun fans worldwide. In America alone it was the opening of our Western frontier, the era of the fur trappers, the California Gold Rush, The Mexican War, the struggle for Texas’s independence and the fight at the Alamo. Pre-Civil War conflicts in “Bloody Kansas,” and Missouri and the Civil War, all happened during the caplock’s heyday. The rest of the world, too, saw powerful European nations exploring and colonizing much of the globe with stirring events like India’s Sepoy Mutiny, The Crimean War, the exploration of Africa and many other of dramatic history-changing events. 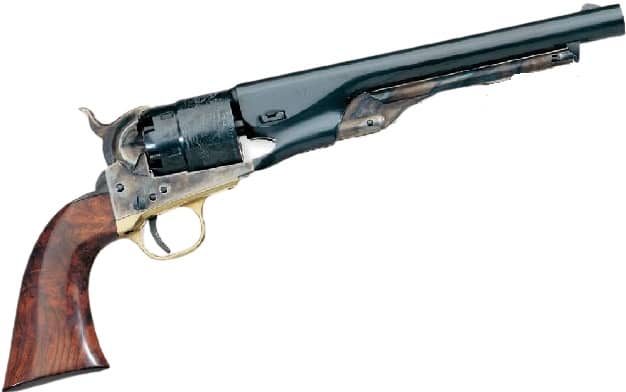 Considered by many arms students as the ultimate in design and practicality in big-bore cap and ball Colt revolvers, the Model 1860 Army .44, as shown by this handsome Uberti USA, blued and color case hardened replica, remains a favorite with black powder hand gunners today.

While myriad styles of weaponry were utilized in these undertakings, the advent of the practical revolver is arguably the most appealing to today’s shooters. The era of the percussion system was also a time of great change—the age of the industrial revolution, the beginning of mass production and interchangeable parts. Of importance to firearms fans, it signaled the arrival of the repeating pistol, changing the way men fought, and often serving, as the old saying goes, as the great equalizer. 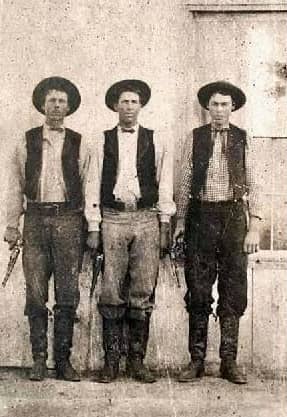 Rincon’s (now Prado, in southern California’s Riverside County) three constables, circa 1863, stand ready with tools of their trade. Left to right: W.B. Roberts has his thumb on his cocked 1860 Army Colt, while John Ralph and W.B.’s brother, George, hold their New Model Remington Army and ’60 Colt a bit more leisurely, yet showing readiness to uphold the law.

Today’s European-made, replica cap and ball revolvers stir the memories of those deeds and misdeeds back to life through historical re-enactments, competition shoots and other venues that feature the epic events and the people who played a part in them. The modern black powder handgun enthusiast has more choices for obtaining a working replica of these legendary smoke wagons than at any time since their introduction. Here’s a sampling of some of them, and where one might view an original example of the historic guns. Check out our Suppliers sidebar, and contact them to see what models each importer offers. 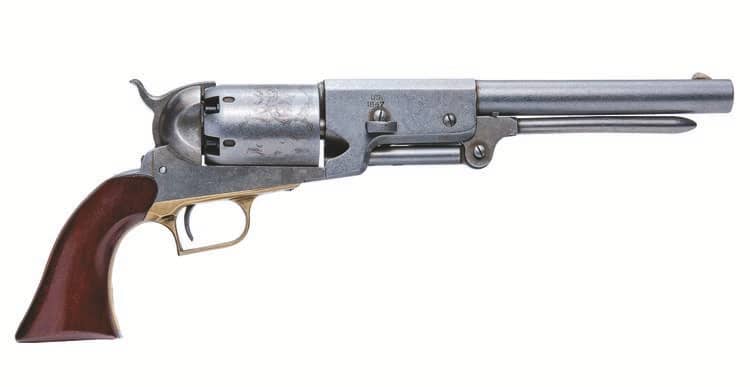 Celebrating 200 years of the Texas Rangers, Cimarron is producing a special run of a museum-quality “Walker’s Walker” replica, aged to look like used originals of the 1,000 1847 Walker Colts issued to the Regiment of Mounted Riflemen during the Mexican War. Each of the military .44 revolvers will be stamped with “U.S.,” company designation and issue number. An additional 100 civilian models will be stamped with the original serial numbers.

This is the pistol that revolutionized revolvers. The unique design, with a cylinder that revolved, rather than the barrel, as in some earlier revolving handgun attempts, made it a practical repeating handgun when compared to other pistols of the era. Patented in 1836, this five-shot handgun got off to a slow start, despite making quite a reputation for itself, especially in the fledgling Republic of Texas, fighting the Comanches. However, the lack of sales caused inventor Samuel Colt to close down his Patent Arms Manufacturing Co. Nonetheless, the Paterson proved its mettle, not only on the Texas frontier, but in the swamps of Florida, during the Second Seminole War. Although only around 3,200 Patersons left the factory, they paved the way for all future revolvers. Loading and firing a Paterson revolver offers the experience of shooting the first practical revolver in history. Examples of an original Paterson may be viewed at the Autry Museum of the American West in Los Angeles, California, and Texas Patersons are on display at the Texas Ranger Hall of Fame & Museum, in Waco, Texas; the National Cowboy & Western Heritage Museum, Oklahoma City, Oklahoma; and the Cody Firearms Museum, in Cody, Wyoming.

Original Dance & Brothers revolvers were made in a larger .44-bore Dragoon size and the .36 caliber Navy configuration, however only 500 guns were ever produced. Dixie Gun works offers the Navy-sized replicas of this Texas Rebel six-gun.