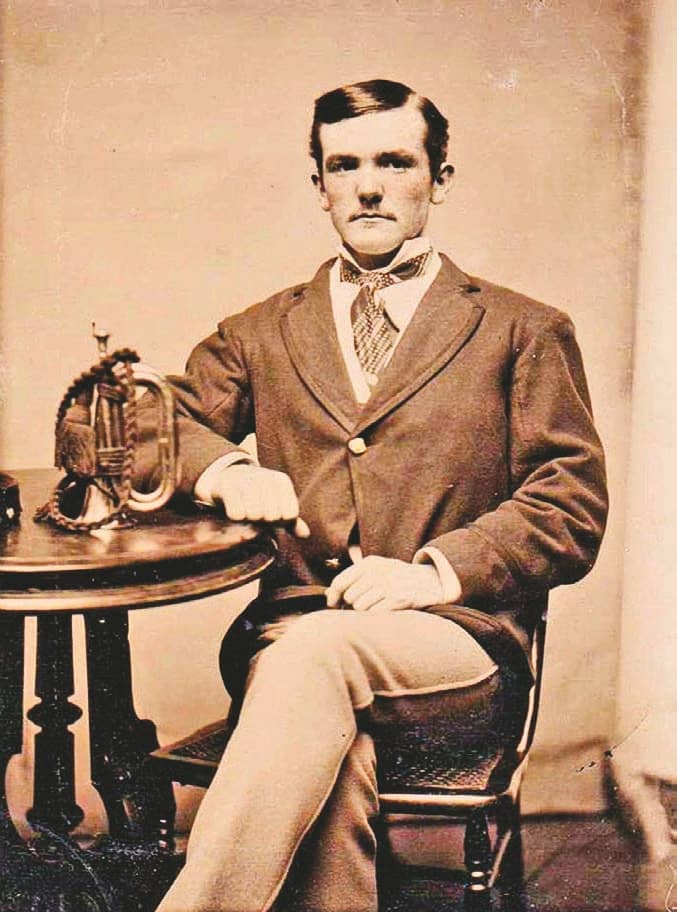 THE 1873 .45-70 TRAPDOOR SPRINGFIELD WAS ISSUED TO TROOPERS JUST BEFORE THE BATTLE OF LITTLE BIGHORN, AND ITS SUCCESS AND FAILURE THAT FATEFUL JUNE DAY IN 1876 IS STILL HIGHLY DEBATED.

Extensive archeological investigations at the Little Bighorn Battlefield National Monument and ballistic analysis have shed light on the legendary clash. This Model 1873 carbine (serial number 19573) was one of the weapons that tested positive for use at the battlefield and, based on the carved name “J. MARTIN” and “H” for his company (see insets), it very likely had been issued to Trumpeter John Martin. Martin delivered the last message from Lt. Col. George A. Custer imploring Capt. Frederick W. Benteen to rush reinforcements and more ammunition to the ill-fated battalion.

On June 25, 1876, the 7th US Cavalry crossed the Wolf Mountains and moved into the valley of the Little Bighorn. Custer was confident of his ability to handle whatever he ran up against, convinced that the Indians would follow their usual practice of scattering before a show of force and completely unaware that he was descending upon one of the largest concentrations of hostile American Indian tribes ever assembled on the Plains. Perhaps as many as 6,000 to 7,000 Sioux and Northern Cheyenne, with as many as 2,000 warriors under such capable leaders as Crazy Horse, Sitting Bull, Gall, Crow King, Lame Deer, Hump, and Two Moon, confronted Custer in the Battle of the Little Bighorn. The foot soldiers were armed with updated Springfield Model 1873 rifles, and mounted troopers carried carbines. Both were provided ample ammunition.

Around noon this Sunday in June, Custer dispatched Capt. Frederick W. Benteen leading three companies to scout to the left of the command. This was not an unusual move for a force still attempting to fix the location of an elusive enemy and expecting him to slip away on contact. It is also possible that Custer, knowing the value of the principle of surprise, hoped to catch his foe unawares. At about 12:30 p.m., still two miles short of the river when the upper end of a village came into view, Custer advanced three more companies under Reno with instructions to cross the river and charge the American Indian camp. With five companies, Custer moved off to the right, still screened by a fold of ground preventing him from observing the extent of his opposition. Perhaps his thought was to hit the Indians from the flank—letting Reno hold the enemy by the nose while Custer kicked him in the seat of the pants. As Custer progressed, he rushed Sgt. Daniel Kanipe to the rear to hurry the pack train and its reinforced one-company escort, urging it forward into what soon erupted into a firefight. Shortly afterward he dispatched Trumpeter John Martin (aka the Italian-born Giovanni Martino) with the last message to Benteen that a “big village” lay ahead and to “be quick—bring packs,” which would have contained important extra ammunition if the firefight had lasted any length of time, which it did not.

Indeed, the main phase of the Battle of the Little Bighorn ended in something like two hours or less. Reno, charging down the river with three companies and some Arikara scouts, ran into hordes of American Indians, not retreating, but advancing, perhaps mindful of their creditable performance against Crook the week before and certainly motivated by a desire to protect their women and children and cover withdrawal of the villages. Greatly outnumbered, suffering heavy casualties, and in danger of being overrun, Reno withdrew to the bluffs across the river and dug in.