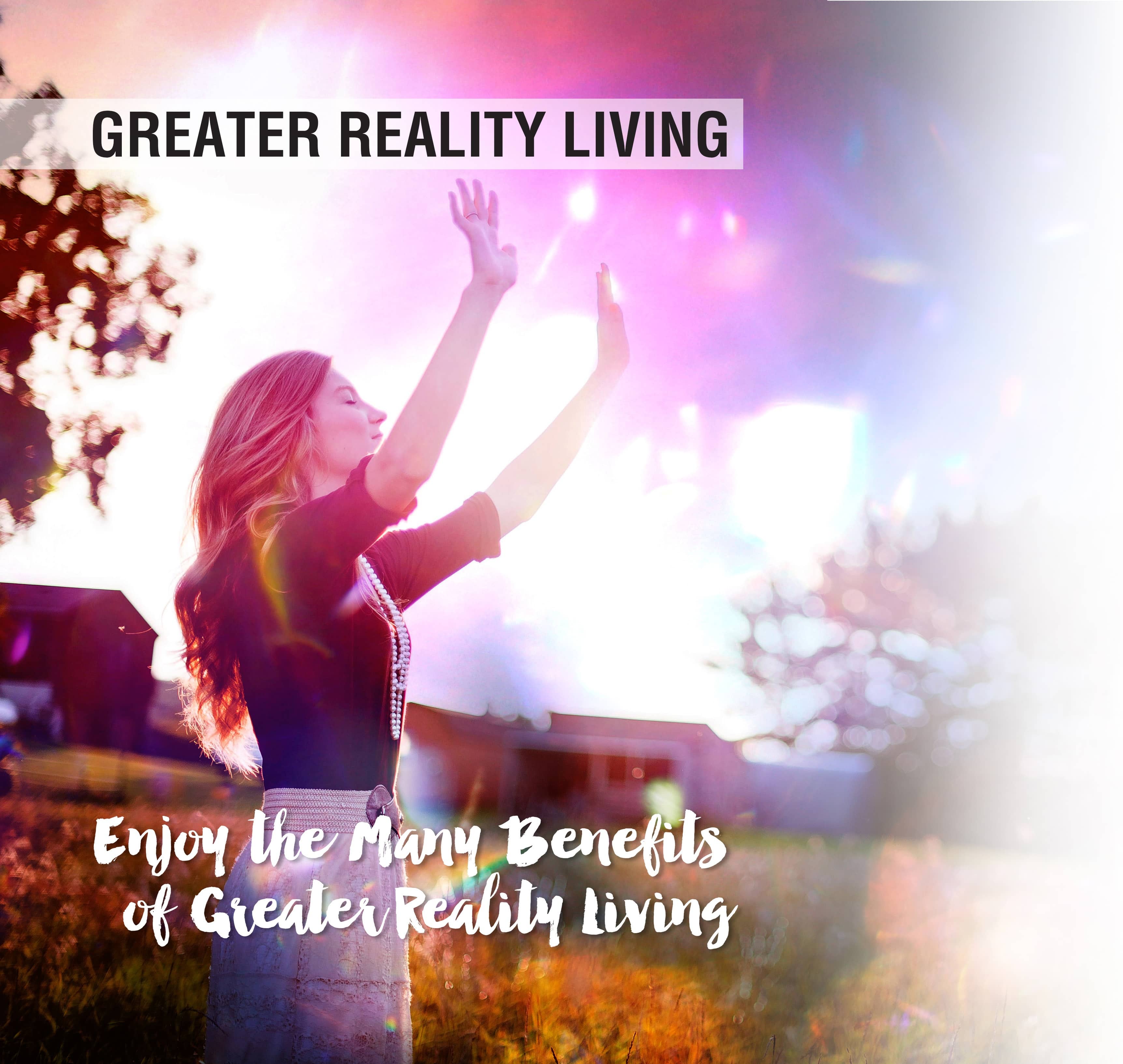 Enjoy the Many Benefits of Greater Reality Living

Knowing that life doesn’t end conveys many benefits, and realizing there is much more to life than meets the eye can improve every aspect of your life. In this article I will simply summarize 12 wonderful advantages come from embracing the Greater Reality Living model:

1. LESS FEAR ABOUT THE DEATH OF YOUR EARTHLY BODY AND LOVED ONES.

Yes, the human body dies, but that’s a mere fraction of who and what you really are. I once interviewed the late Dr. Wayne Dyer, and I asked him: “What do you tell parents with children who died?”

He answered: “That there is no death; that’s not a possibility. Our true essence is that we are spiritual beings having a human experience. Self-actualizing people get over death almost as if it didn’t happen—because for them it doesn’t happen. Once you see that, you realize you can never be separate from them. There’s a sacred hoop that connects all of us.”

We also now have extensive research on near-death experiencers who report that heaven and hell are states of existence, not physical realms where people go after they pass. Many thousands of people have reported life reviews in which they not only saw, but also felt the good or bad they did to others. After their experiences, many of them felt that ‘heaven’ and ‘hell’ were best understood as the aftermath of cumulative thoughts, words, and deeds.

2. YOU WILL SEE YOUR POSTMATERIAL LOVED ONES AGAIN.

Much evidence indicates that you can enjoy a wonderful reunion with dear ones after your earthly body dies. Sources of this evidence include documented near-death experiences, authentic mediums, and life between lives hypnosis regressions. Knowing you will see them again means that bodily death is not a goodbye, just a see you later.

However, you don’t have to wait until your body perishes to enjoy a different but continuing relationship with your postmaterial loved ones. Many people have experienced meaningful visits with their family, friends, and pets who have changed worlds through spontaneous after-death communications (ADC); sessions with highly evidential mediums (see article #6 Evidential Mediums at http:// www.SoulProof.com) my facilitated ADC Technique (http:// www.SoulProof.com); induced ADCs (http://www.InducedADC.com); and the Psychomanteum Technique developed by Dr. Raymond Moody (http://www.LifeAfterLife.com). In addition, SoulPhone devices are expected to allow texting, talking with, and seeing postmaterial persons (PMPs). Visit http://www.SoulPhone.org and sign up for the free e-newsletter to learn more and get updates.

3. DEEPER KNOWLEDGE THAT YOU ARE AN INTEGRAL PART OF LIFE SOURCE.

After an NDE, people often report: “We are each one with the One and part of Source.” Statements like this are especially impressive when reported by documented near-death experiencers—those who perceived and accurately described details in and around the hospital while clinically dead.

As Joseph Campbell stated in An Open Life: “The divine lives within you. The separateness that is apparent in the phenomenal world is secondary. Beyond, and behind, and within and supporting that world is an unseen but experienced unity and identity in us all.”

Ralph Waldo Emerson described finding cosmic oneness in nature: “I see all; the currents of the Universal Being circulate through me; I am part or particle of God.”