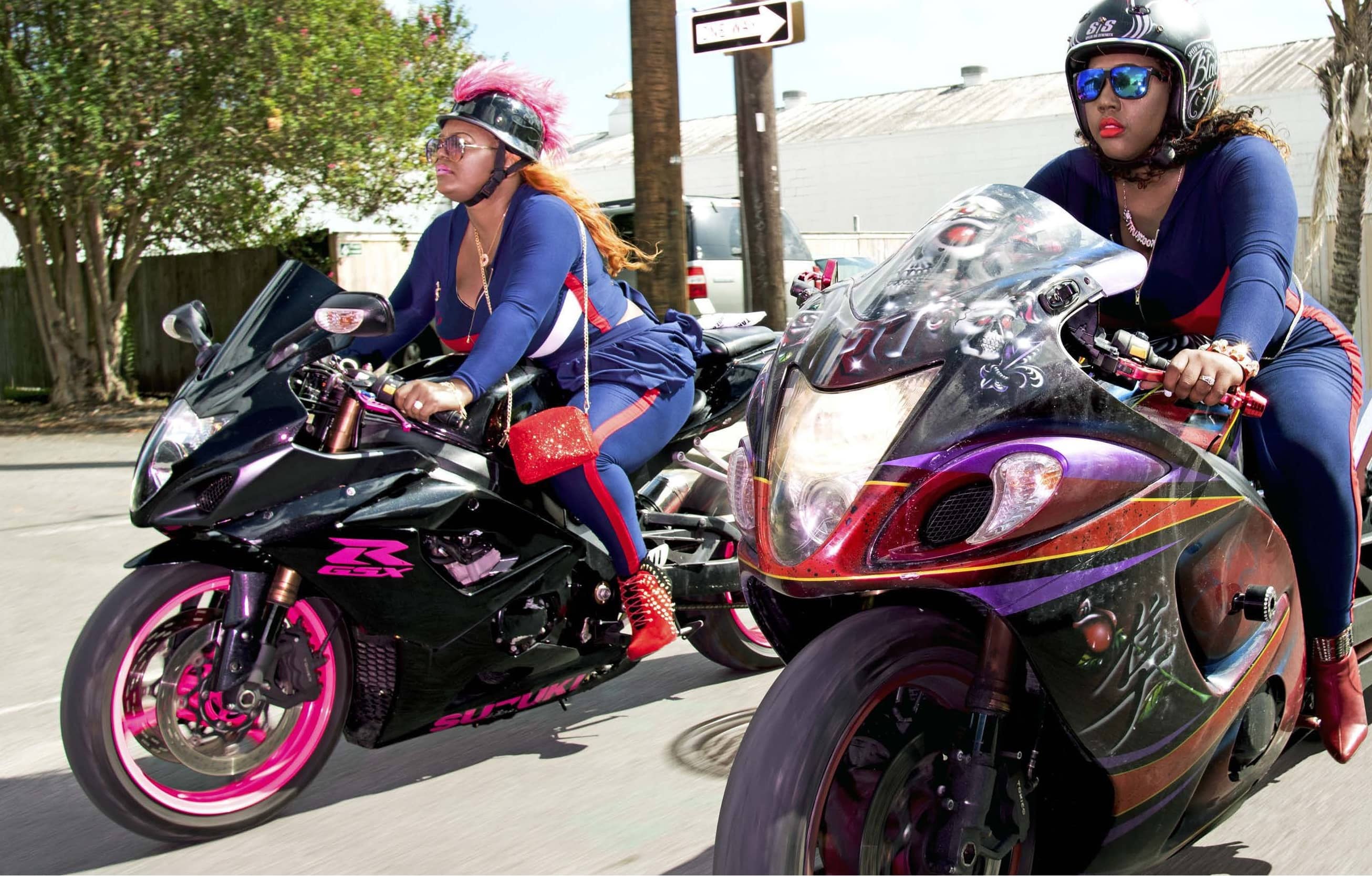 There’s a special kind of electric gladness that results when women team up for a common goal. On the following pages, you’ll find a collection of crews who hop on boards, rev engines, or lace up their boots for a heady climb to a spot with a clear view—and, in the process, prove that when we move in sync, there’s precious little we cannot do.

A MOTORCYCLE SQUAD CRUISES THE PAVEMENT AND CONQUERS HEARTS.

ON A SIDE STREET in New Orleans’s Seventh Ward, next to the crawfish spot Cajun Seafood, a crowd is gathering on a muggy afternoon. Jaws literally dropping, bystanders whip out their phones for photos, as all eyes are fixed on a cluster of ladies straddling custom-airbrushed motorcycles. These biker queens are wearing navy catsuits, stilettos, and helmets with a hedge of pink bristles running up the back. But before anyone can chat them up, the light changes and they zoom off, leaving behind a wake of exhaust and the boisterous whine of engines. This corner’s just been blessed with an appearance by the Caramel Curves.

Asked to picture someone in a motorcycle club, you might conjure a 60-year-old white dude with neck tattoos and a Fu Manchu. But the Caramel Curves—all female, all black—buck that tradition handily. The Curves didn’t consciously model themselves on Bessie Stringfield (the “Motorcycle Queen of Miami” and first African American woman to bike solo across the U.S.—in the 1930s, no less), but they’re following in her boundary-busting tread marks.

The Curves ride together, do philanthropy together, promote the image of lady bikers together, and emotionally hold one another aloft whenever necessary. Ranging in age from the 25-year-old Choosy to the 54-year-old Hott & Spicy, they wear matching outfits for public appearances at brass band-led second-line parades, charity events, and barbecues. And when they burn tires—braking and accelerating at the same time—the dense plume of smoke is the color of cotton candy. Keioka Royal, who goes by Bomshell (as if Keioka Royal weren’t snappy enough), says being in the crew has been a game-changer: “My Curves sisterhood brings everything together. It gives me life.” Shanika “Tru” Beatty, the club’s 35-year-old co-founder, is its de facto press secretary. (As for how she got her nickname, she explains, “Because I hate to be lied to, and I’m a true biker.”) Tru’s father is a former motorcyclist, but he wasn’t her only inspiration. “When I was a kid, I’d watch Saved by the Bell, and one bad-girl character had a leather jacket and a motorcycle,” she says. “I thought, I don’t know what everybody else on this show is doing, but she is cool.”

Fellow Curves cofounder Nakosha “Coco” Smith has been riding since age 15, and in July 2005, she and a couple of friends “rounded up pretty much all the broads who had bikes” and talked about creating a club. For the name, Coco says, “‘Caramel Curves’ just flowed so easily: caramel for our complexions, and curves because it represented our body shapes and taking curves on a motorbike.”

But just as the Curves were building momentum, the heart-crushing, all-encompassing devastation of Hurricane Katrina ground the club to a screeching halt. The group re-formed in 2008, while New Orleans was still staggering to its feet. Now there are 14 members, and more chapters are planned. (And despite its name, the club is open to Curves of any race.)