Wenatchee author has aspirations, attitude and at last — Asperfell 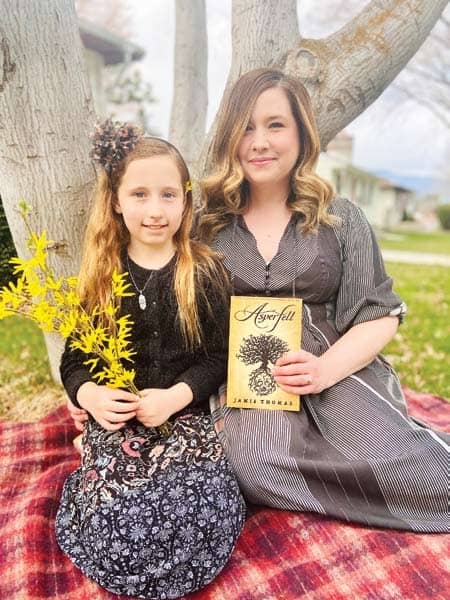 Wenatchee teacher and author Jamie Thomas is a world builder.

When she writes fiction, she first envisions the setting, not one on our present earth but one made of her imagination, a retreat from reality that is sometimes terrifying, occasionally idyllic, always unusual.

That’s her claim to fame in Asperfell.

Available since February, this gothic fantasy is Jamie’s first published novel, and her editor and her readers enjoy the place (a vast mysterious prison complex for magicians), the premise and the plot so much that she’s contracted to complete a trilogy over the next two years.

With a reading preference for Jane Austen, Victorian poetry, fantasy fiction, and gothic romance and horror novels, as well as a family affinity for Irish legends, Jamie is in her natural element as she crafts her books. She said, “My natural writing voice is really 19th century classical, kind of old-fashioned.”

She’d been encouraged in her writing as a teen, and over the years had attempted a few other novels. “I have some starts in my files,” she said. “But Asperfell was exactly the story I wanted to write, when I wanted to write it.”

A reading of her first draft got an encouraging thumbs-up.

Jamie, at 38 a certified novice at researching publishing possibilities, was picked up in January 2019 by a bold young company, Uproar, through a Twitter plot-pitching session. The next months were a blur of constant structural re-writes.