The not-so-secret lives of bees 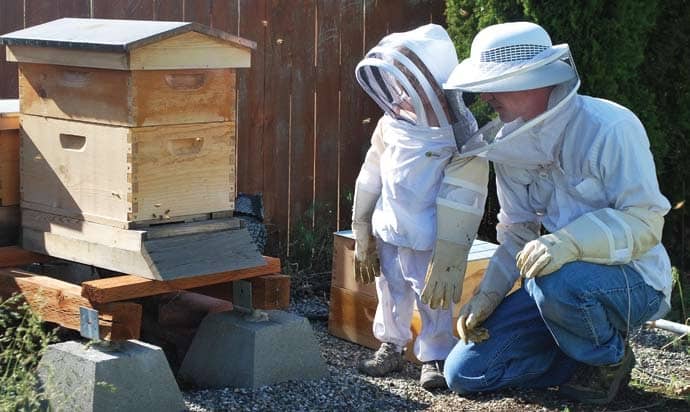 Blame it on Mexico. Back in 1999, during a retreat in a Benedictine abbey in Mexico, East Wenatchee’s Michael McNiel’s duties included tending to the monastery’s bees, and he got stung.

Not literally stung, that would come later, many, many times. Just stung with the idea of raising bees.

He came back home and he did it for about 10 years in his East Wenatchee home alongside his wife, Michelle, starting around 2004. At one point, they had five hives, with about 50,000 bees per hive. They raised bees until about 2012 when their youngest daughter was about 2 years old.

“I was just worn out,” Michael says of why he took a break from the bees.

Now the 2-year-old is almost 10 and the bees are back, with the 10-year-old as a budding bee-whisperer.

“Kayleigh has always really enjoyed it,” Michael said. She’s the youngest person in the house, but when it comes to bees, she’s old-school. Sometimes she goes to tend to the hive without a veil or anything. All that’s missing is a cigar dangling from her mouth, to help the smoke keep the bees away like the old-timers do it.

She’s been stung, Michelle said of her youngest, but she remains fearless, which makes Michelle happy, although Michelle herself hasn’t been so lucky. Every sting has hurt worse than the time before. One time she couldn’t tell her knee from her ankle, it was all so swollen. So now she’s happy to remain in the background as the beekeepers’ photographer.

As members of the Orthodox Church, each one of the McNiels has a patron saint. Kayleigh’s patron saint is Saint Abigail, who is of course the patron saint of beekeepers.

“That was by accident,” Michael said. “We had no idea.”

Living with and raising bees is a leap outside a person’s comfort zone, Michael said. When 250,000 bees surround you, you find out pretty quickly what you’re made of. The first time, that time in Mexico, Michael struggled quite a bit.