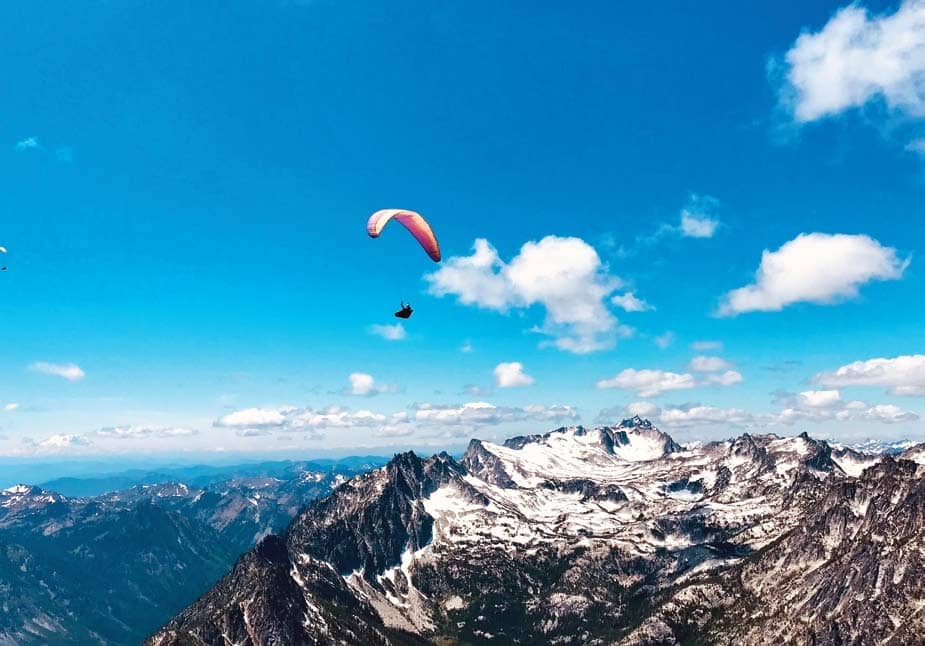 Perhaps you have looked up in the sky during the spring, summer or fall months and seen colorful balloon looking specks in the sky.

If you don’t know what you are seeing, then this article will shed light on these mysterious floaters, and if you do recognize these as paragliders then this piece will hopefully explain a bit more as to why you might be seeing more and more of these engineless aircrafts in and around the Wenatchee Valley.

I was one of the kids with a wild imagination and endless sense of adventure, and I was also one of those kids who tied four corners of the bedsheet together and began jumping off things.

I was sure if I tried hard enough and used all of my concentration, that I could fly.

Maybe you were one of those kids too, they are out there, and they know that gravity is a tough nut to crack. Little did I know at the same time that I was trying to fly off a ladder with a bedsheet, some of the first paragliding flights in the world were actually happening around the Wenatchee Valley.

I never let my flying dreams go, and eventually, I found paragliding, and for me, I had finally found the solution to my gravitational pull from the earth. Let me explain.

Paragliding is a slightly obscure adventure sport done all over the globe.

The glider itself is a lightweight, complex structure made from nylon. The canopy stays inflated by air filling cell openings in the front of the glider, and a set of long, thin lines attach the canopy to the harness with the pilot sitting in an upright position.

These gliders are foot-launched into an upslope breeze and have no engine.

Pilots are able to attain altitude by circling in rising columns of hot air, known as thermals, basically mimicking the actions of soaring birds. By gliding from thermal to thermal, (as birds also do) pilots can fly hundreds of miles in a day, riding the thermals and the wind.

Landing can be done by choice or sometimes when flying cross-country, a pilot can lose the thermal lift or encounter unforecasted winds which will force them to land in any suitable open space available.

Paragliding is truly an unparalleled way to interact and experience the geography from the sky, giving views that cannot be seen any other way.

Thirty years after my childhood flight attempts, I found myself poised on top of Tumwater Ridge, a well-known feature in Leavenworth. My orange and purple nylon paraglider spread out before me, my flight instruments firmly attached. I was suited up with a windproof down coat, battery-powered gloves, radio, in reach tracking device, inflight snacks, a compass, and an iPhone with a solar charger battery pack.