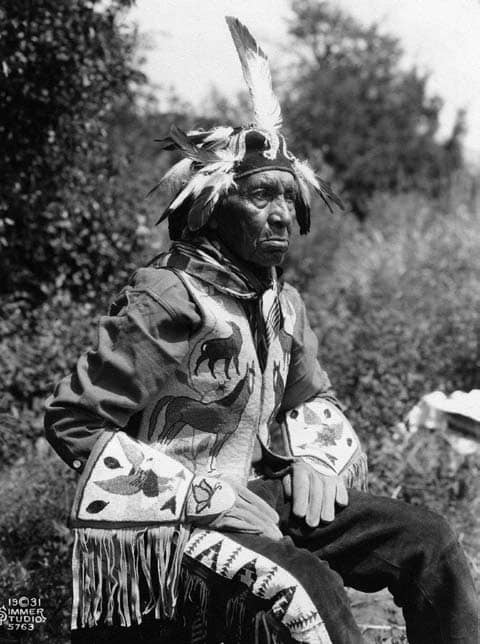 “I did not come here to lie to anybody. I have come here with a true, honest heart. I would like to have you listen to what I have to say. You can’t make me believe that all white men are rascals.”

Wenatchee/P’squose Chief John Harmelt said those words in 1893 as he worked to secure for his people the reservation the government promised them in 1855.

In May of that year Governor Isaac Stevens, Washington’s first Territorial governor, called all central Washington tribes to a treaty council in the Walla Walla Valley.

On the final day of the council, Governor Stevens was desperate to get the signatures of several tribal chiefs still reluctant to sign. Stevens’ week-long campaign of promises, intimidation and threats had not won over all the chiefs.

Tecolekun, the Wenatchee/ P’squose chief at the council saw an opportunity. He refused to sign unless his people were given a small reservation of their own at the most culturally important and productive salmon fishery in north-central Washington.

Article 10 of the Yakima Treaty, hastily written that last day, July 9, and signed by Governor Stevens, promised a reservation at the forks of the Wenatchee River. The reservation would be a township in size, six miles square.

The Wenatchee/P’squose and the Yakimas traditionally both used the fishery and both understood that the “forks” of the Wenatchee River referred to its confluence with the Icicle River. The lack of more specific language in the treaty defining the location would lead to problems.

The U.S. government, for its part, was obligated to ratify the treaty in Congress, which it did four years later in March 1859. The government was also obligated to properly locate and survey the reservation.

Thirty-seven years later, in 1893, there still had been no survey.

White settlers were moving onto reservation lands and the Great Northern tracks crossed the fishery. Through all those years the Wenatchee/P’squose lived up to their obligation and did not join any war against the United States. They believed the government would keep its promise.

In 1856, the year after the treaty was signed, the Yakima wars were heating up.

White miners had been killed crossing Yakima land and Colonel George Wright suspected the killers had fled to the Wenatchee country.

Colonel Wright brought troops over Blewett/Swauk pass and followed Peshastin Creek down to the Wenatchee River. At the fishery reservation he saw 2,000 Indians harvesting the huge salmon run.