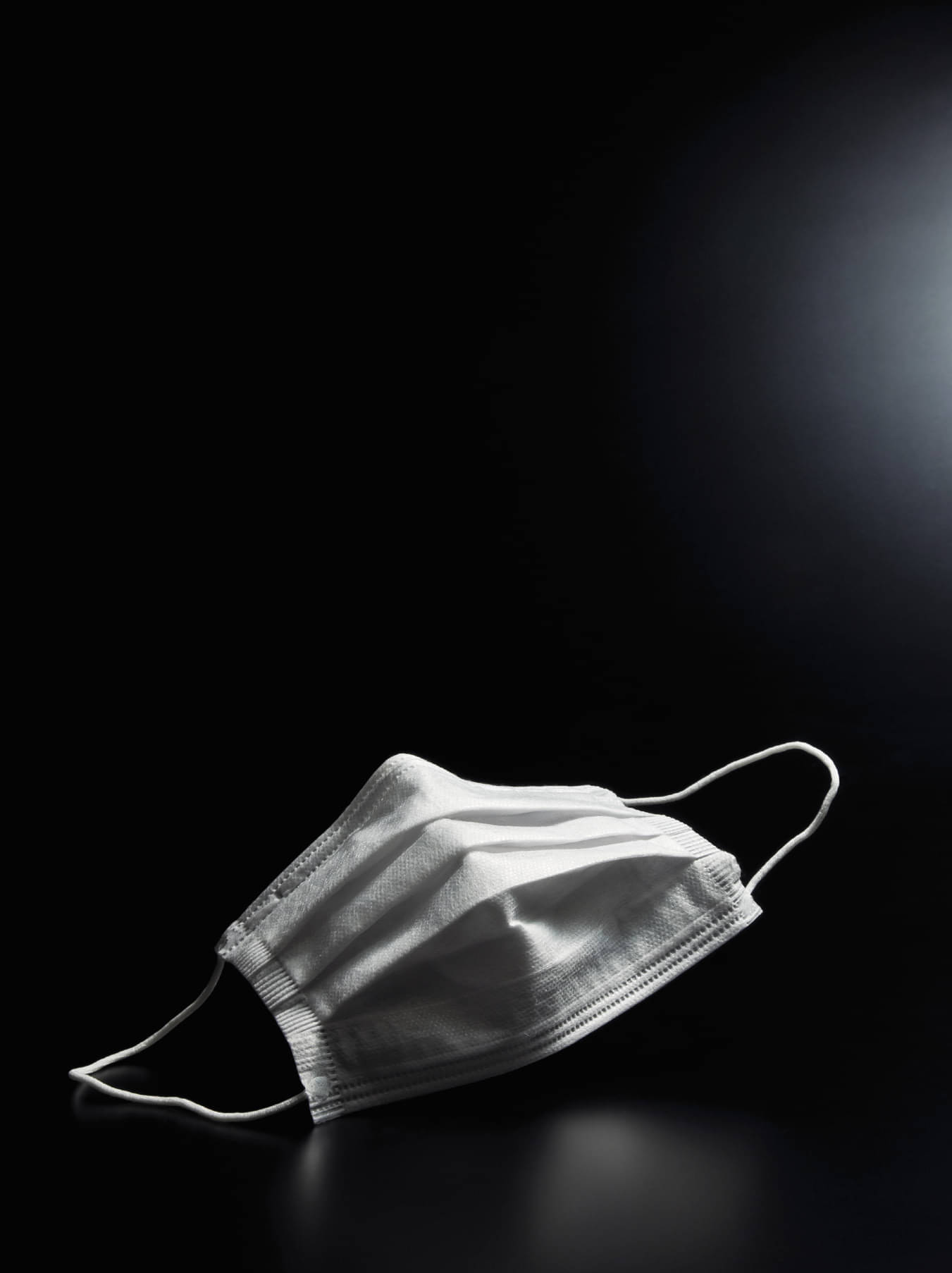 Businessmen transforming their factories into cleanrooms for face mask production. Tycoons donating medical supplies to desperate nations around the world. Doctors rising above politics to deliver guidance for the public and clear reports on the progress of their efforts. Throughout our communities, powerful voices are using their influence to bring hope through their actions, their ideas and their examples

Mask Crusade Scientists like Dr Tom Kong of Master Dynamic are fighting the spread of the coronavirus with technology by Eric Wilson In a quick, well-practised motion, Dr Tom Kong snaps on a pair of synthetic blue shoe covers and steps into a small glass chamber, where any particle of dust that might have settled on his body is blasted away by a steady stream of air for 10 seconds. As a door opens to admit him into a sterile cleanroom, Kong turns and says, by way of introduction to his work, “Diamonds, in fact, are not only a lady’s best friend. They are also a scientist’s best friend.”

As the CEO and co-founder of Master Dynamic, Kong oversees several high-tech labs in the region, including this one in Hong Kong Science Park at Shatin that specialises in quantum technology research, with a particular focus on practical applications using tiny carbon particles produced by high-eneregy processing—so small they are called “nanodiamonds”. Throughout the black room, microscopes, computers and monitors set a scene that resembles something from a scifi movie. Since 2011, the company has specialised in research and development for various industries, including techniques to distinguish natural diamonds from lab-produced ones or counterfeits, and biotechnology applications that have great potential for saving lives. In one example, nanodiamonds might make it possible for doctors to target chemotherapy treatment to cancerous cells even before they develop into detectable tumours.

But since the outbreak of the coronavirus, Kong and his colleagues have pivoted to something more practical—the production of protective face masks to address severe shortages around the world. Master Dynamic is making tens of thousands of them daily in its facilities. Meanwhile, Kong has also fast-tracked the development of a more experimental design, a reusable mask with a specialised nanodiamond coating. If that mask, which is currently being tested, proves successful, it would neutralise the virus upon contact with the nanodiamonds, which are statically charged to act like microscopic stun guns that “zap” bacteria and viruses.

Kong was born in Hangzhou and moved to Hong Kong when he was seven, but spent much of his adult life in America following his graduate and post-graduate degrees in mechanical engineering at UCLA. He worked for Rockwell International and General Electric before returning to Asia in 2006 as a professor at The Chinese University of Hong Kong. But it is his research work in the last decade that has brought Kong the most satisfaction, especially when collaborating with biologists, chemists and other specialists to collectively find solutions to all sorts of challenges.

In traditional jewellery making, for example, the creation of individual settings is a painstaking artisanal process that is increasingly becoming a dying art, but Kong has developed a technique to grind metals into such fine powder that an 18-karat gold chain for a bracelet can be produced on a 3D printer and watch parts like a silicon hairspring can be produced to such a degree of thinness that they appear transparent. For Chow Tai Fook, the jewellery company headed by Adrian Cheng, Master Dynamic invented technology to make a transparent marking on each of its T Mark diamonds, including a nano mark and number to enable reliable traceability.

Cheng’s extensive financial donations and efforts to produce face masks and other supplies, as well as the new Creating Shared Value platform of New World Development, inspired Kong to take action by applying technology to the problem of the coronavirus.

“Technology, if you use it wisely, can change a whole industry,” he says.

The advanced masks are being developed as quickly as possible to help save lives, of course, but Kong also notes the potential benefit to the environment, considering the massive amount of waste being produced by daily use of disposable masks. While his company has other proprietary projects in the works that could result in important medical breakthroughs and may take years to achieve, the urgency of the current crisis has only served as a reminder to Kong of the importance of sharing information with colleagues.

“My job is to get all the information, pass it along to the team and give them guidance to get things done quick,” Kong says. “I remind them I have never failed any project. If you never declare failure, then one day you can solve all the problems. This is our philosophy.”

Sanitising our phones is one of the most overlooked habits we should be adopting now. To this end, Hong Kong start-up Casetify has launched a UV sanitiser that uses radiation-free lights to kill 99.9 per cent of bacteria as part of its #CasetifyProtects initiative. “The UV sanitiser was actually something we’ve had up our sleeve for a while now, already developed and tested by Casetify,” says Ng, adding that with the current situation, it made sense to release the product now. “We want to protect those in need and the quicker we’re able to do it, the more people we can help.”

Professor Dr Narin is the head of Chulalongkorn University’s Covid-19 emergency operation centre and one of Thailand’s top experts in disease and epidemiology. His team developed a Covid-19 strip test that delivers results in 15 minutes. After more than 100 trials, tests have shown a 95 per cent accuracy rate. The strip testing service is now available at Chulalongkorn University by first registering online. He explains that while the Chula Covid-19 test strips do not replace conventional polymerase chain reaction tests, the goal is to ease the burden on hospitals as more and more people visit them to be tested.

As part of efforts to decentralise production of safety equipment in Malaysia, Rashvin Pal is coordinating creative professionals and suppliers of laser cutters and 3D printers to remotely make face shields for hospitals. “A community of Malaysians has banded together to ensure that those risking their lives on the front lines are well protected,” says Rashvin Pal. “It is imperative that every organisation reimagines its relevance in this new world, and we continue to nurture and protect it with the utmost care and deeper unity.”

Hong Kong-based genetic testing and digital health company Prenetics—better known by its signature product, CircleDNA—has announced that it will work with several collaborators to expand Covid-19 testing across the city. The nonprofit Project Screen will allow people to receive and return at-home test kits, with results in 24 hours, at a cost of HK$985, HK$300 of which will be subsidised for frontliners and their families by Prudential Hong Kong. “No one company can do it all and it’s just amazing we have the support of so many industry leaders,” Yeung says. “We felt it was our responsibility to do everything we possibly can for the community.”

People power is a force to be reckoned with, especially when it comes to the ardent fans of a star, which explains how Maia Estianty has raised more than Rp3.4 billion since the coronavirus first appeared in Indonesia. The fundraising is an ongoing project between the music producer and singer Maia with actress and businesswoman Cathy Sharon, who have a combined total of 16.1 million followers on Instagram and belong to a group of charitable women called the Tempe Gang.

“Since the virus spreads so quickly and Indonesia has experienced a shortage of supplies for its medical teams, we have to help out not only in Jakarta but also in other provinces where the situation is even more desperate,” Maia says. As of mid-April, funds have been distributed to 168 hospitals in eight provinces to purchase vitamins, supplements, disinfectants, soaps and many other essentials.

Some donations have been given directly to daily wage earners. A soup kitchen is also planned to reach more people around Jakarta.

“This pandemic is a hard hit for the small enterprises that make up a large amount of the country’s workforce,” she says. “By staying positive and connected to the consumers, ideas will come from this time of re-learning and regrowth to remain afloat today, or to make a fresh start later on.”

Billionaire couple Joseph and Clara Tsai made headlines worldwide in April when they donated 2.6 million masks, 170,000 pairs of protective goggles and 2,000 ventilators to New York. “We kept hearing cries for (personal protective equipment) from our community and wanted to help,” Clara told CNN.

“With the help of government agencies, donors and corporate sponsors, we can change lives in vulnerable communities”

The couple split their time between Hong Kong, California and New York, where Joseph, who made his fortune as a co-founder of Alibaba, is the owner of the NBA team the Brooklyn Nets. Although basketball season has been postponed due to the Covid-19 pandemic, Joseph has committed to paying hourly workers at the Nets’ home court, Barclays Center, until at least the end of May.

The Tsais’ donation of protective equipment and ventilators arrived in New York as the city and state became the hardest-hit region in the world, with more cases of coronavirus and deaths than have been recorded in the whole of China since the start of the outbreak. In his televised daily briefing, Governor Andrew Cuomo thanked the couple, saying that the donation was “really good news” and “this is a big deal and it’s going to make a significant difference for us”.

After Malaysians were ordered to stay home to stem the spread of Covid-19, businesswoman Vivy Yusof knew she would not be content to sit around doing nothing. So she and her husband, Fadza Anuar, started looking for a way they could give back.

“It all started on social media when I saw the chairman of Universiti Teknologi Mara, Dato Sri Syed Zainal, donating portable air conditioners to hospitals. So I contacted him to ask for hospital contacts. From there, I got in touch with some volunteers and donated air conditioners, laptops, cash and food to sustain them through their work,” she says.

The chief creative officer of FashionValet and dUCK has become a vocal advocate for the welfare of frontliners, using her influence to highlight their plight and what can be done to assist them.

“At first I wanted to do this discreetly, because I didn’t want people to think I was showing off. But then I realised I should tell others about this to inspire them to help and keep the momentum going. After all, that’s what made me help in the first place: I saw someone else doing it,” she says.

When requests started flooding her inbox, she decided to take a more active role and galvanised her supporters into action. Together with the Islamic Medical Association of Malaysia’s Response and Relief Team, Fadza and Vivy put together a crowdfunding site to help the frontliners.

In just a week, her FV Covid-19 Support Fund raised over RM1 milion. The money has been used to purchase whatever the frontliners need, most recently fabrics for Malaysia’s fashion designers under MODA to sew PPE for the doctors and nurses.

Vivy says that she has been touched by the spirit of unity that brought together Malaysians in this time of need.

“I saw so much kindness from friends, local brands, followers and acquaintances— we got over 25,000 donors to the fund. It doesn’t matter whether it is a big sum or a small sum, everyone did what they could to help. So many celebrities helped, amazing people like Scha Alyahya and Marion Caunter even attached our fund page on their bio links. It humbled me to know how kind Malaysians can be,” she says.