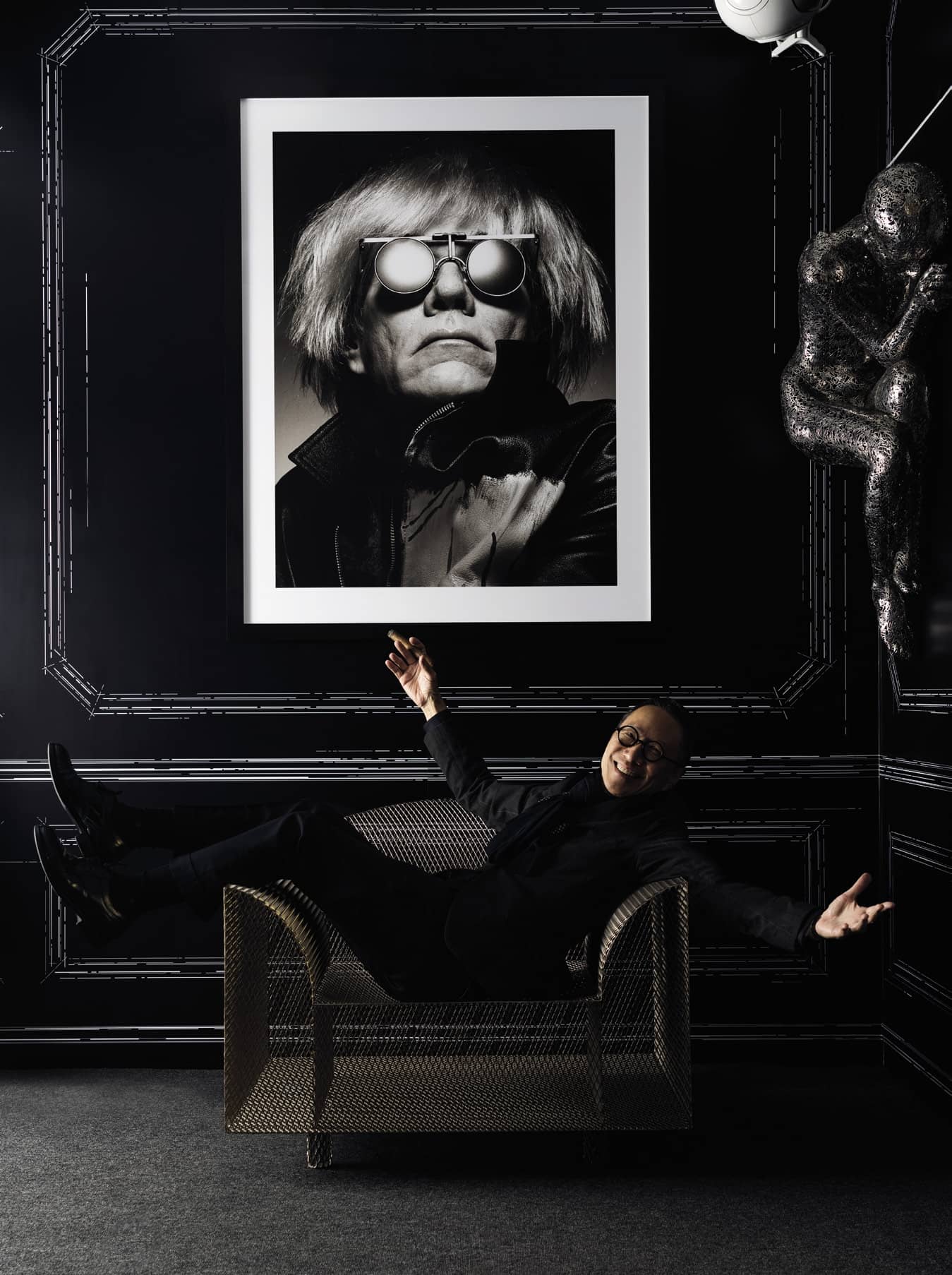 There is no doubt who owns this sprawling, 7,000 sq ft apartment in Quarry Bay. Hanging right next to the front door to greet every visitor is an extraordinary oil-on-canvas portrait of designer and artist Alan Chan by leading contemporary Chinese artist Zeng Fanzhi, who rarely paints to order, and not just for anyone. Just around the corner, a series of mock film posters are lit like the marquee of a theatre, each depicting Chan in a different starring role. In one, he’s a suited, James Bond-esque hero. In another he’s posing—tastefully— totally naked. “I have the posters made to mark my birthdays,” says Chan from behind his signature owlish glasses. The latest, an image that features Chan sitting on a crescent moon with a fishing rod—a play on the Dreamworks logo—was unveiled at Chan’s 70th birthday celebrations in January.

That milestone was particularly special because it also marked 50 years since Chan began working as a designer and 40 years since he founded Alan Chan Design Company, which has created album covers for stars such as Leslie Cheung and Anita Mui, the logo of legendary Eighties nightclub Canton Disco, clocks for Seiko, furniture collections, and branding for City’super, Fancl and Hong Kong International Airport, among dozens of other projects. To mark the occasion, Chan decided to go all out. Rather than taking over a restaurant or bar and filling it with hundreds of friends, as he has done in previous years, he converted a floor of an industrial building into his very own private museum, styling it as an apartment filled with hundreds of items from his vast collection of art, antiques and furniture.

Originally, Chan had planned to move everything back into storage after his party but, for now, is keeping the space as is. He regularly hosts dinners here and is mulling opening it to art and design students, patrons of local arts institutions and maybe even to the general public. In the long term, he hopes to relocate these displays to his own permanent private museum, which he wants to open either in Hong Kong or Japan.

“I bought this place 30 years ago for investment,” he says. For most of that time it was rented out for events, including to top fashion brands, who used it to showcase new collections to journalists and big-spending customers. “Chanel covered the whole space in pink carpets and made a VIP room for their top clients. Bringing VIP tai tais [to this industrial building] gave them a big surprise, and it was designed so that it could be anywhere in the world—it could’ve been Paris, London, Tokyo, Russia, wherever.”