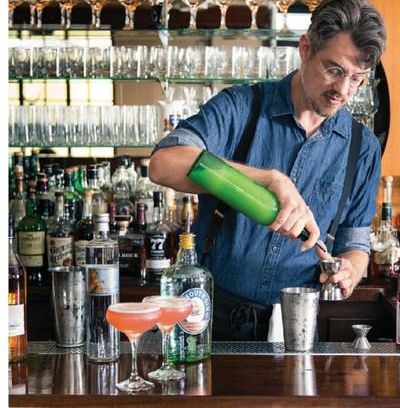 Investigative bartender Toby Cecchini on an exquisite pink gin drink and the club in Louisville, Kentucky, that forgot how to make it.

A long while back I had two regulars in my bar who enjoyed tasking me with interpreting classic cocktails. One night, these fellows ordered their all-time favorite, the Pendennis Club Cocktail. I blushed over my inability to conjure it: I had heard of it but had never encountered one nor seen a recipe. They walked me through it—gin, apricot brandy, lime juice, and Peychaud’s, the revered, anise-inflected New Orleans bitters. Taking a sip, I experienced one of those zoomfreeze moments. Intriguingly opaque, slightly frothy,and salmon-hued, the Pendennis Club Cocktail has a mesmerizing balance of flavors: sweet, tart, and packed with spice and strength all at the same time. It has remained one of my favorite drinks for some two decades, during which time I have tinkered with its parts and attempted to trace its perplexing history.

The actual Pendennis Club is a dining and social institution in Louisville, Kentucky, some 130 years old and deeply garlanded with its city’s history. It has long billed itself as the birthplace of the old-fashioned, a debate that has raged long and loud but one for which I’d prefer to stay on the sidelines. Instead, what I’ve wanted to know for many years is, who cooked up the actual Pendennis Club Cocktail, and why, in the middle of the bourbon belt, would this namesake house drink be composed with gin?