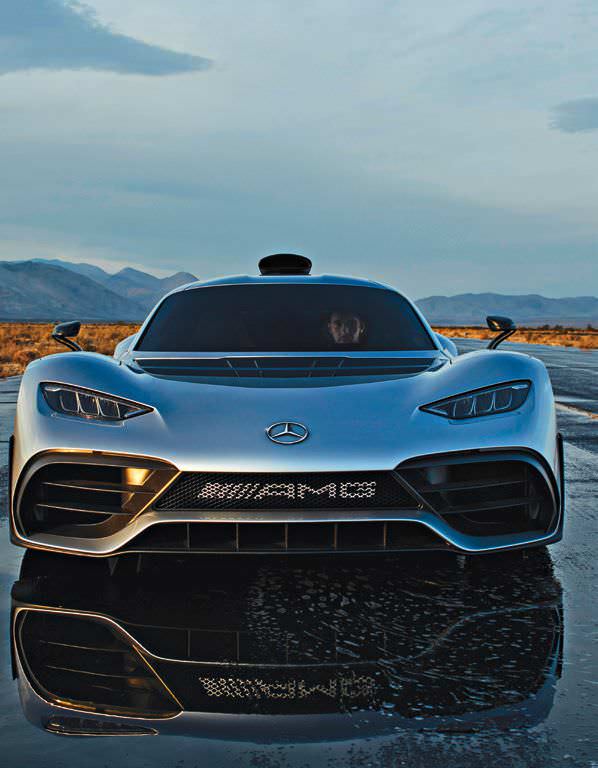 Lewis Hamilton gives Robb Report a behind-the-scenes look at Mercedes-AMG’s new Project One, a road-going hypercar the Formula 1 phenom has been championing for years.

Lewis Hamilton greets me in his air-conditioned trailer holding a box of raw cremini mushrooms. “Want one?” he asks, extending his arm. I decline. “Suit yourself,” he says and pops one in his mouth. “I quite fancy mushrooms. Well... not those kind of mushrooms,” he adds with a laugh.

He is still wearing the last look from his earlier photo shoot for Robb Report. The black trousers and houndstooth-and-velvet coat by Colombian- born designer Haider Ackermann are far too glamorous for our digs — a Star Waggon parked on a dusty runway in Inyokern, roughly three hours by car from Los Angeles in Southern California’s high desert. For racing fans, Hamilton needs no introduction. In 2007, I watched from turn 10 at the Circuit Gilles-Villeneuve in Montreal as the 22-year-old rookie won his first F1 race. In 2013 he signed with the Mercedes-AMG Petronas Motorsport F1 team and went on to win three more world championships, the most recent being last year.

Of course, Hamilton didn’t do it alone. His accomplishments are shared with the hundreds of men and women who work long, hard hours in design studios, laboratories and garages, creating and perfecting some of the fastest, most technologically advanced cars in the world. Although Mercedes dominated F1 racing in the 1930s with its famous