THE WILD WEST OF NEW ZEALAND 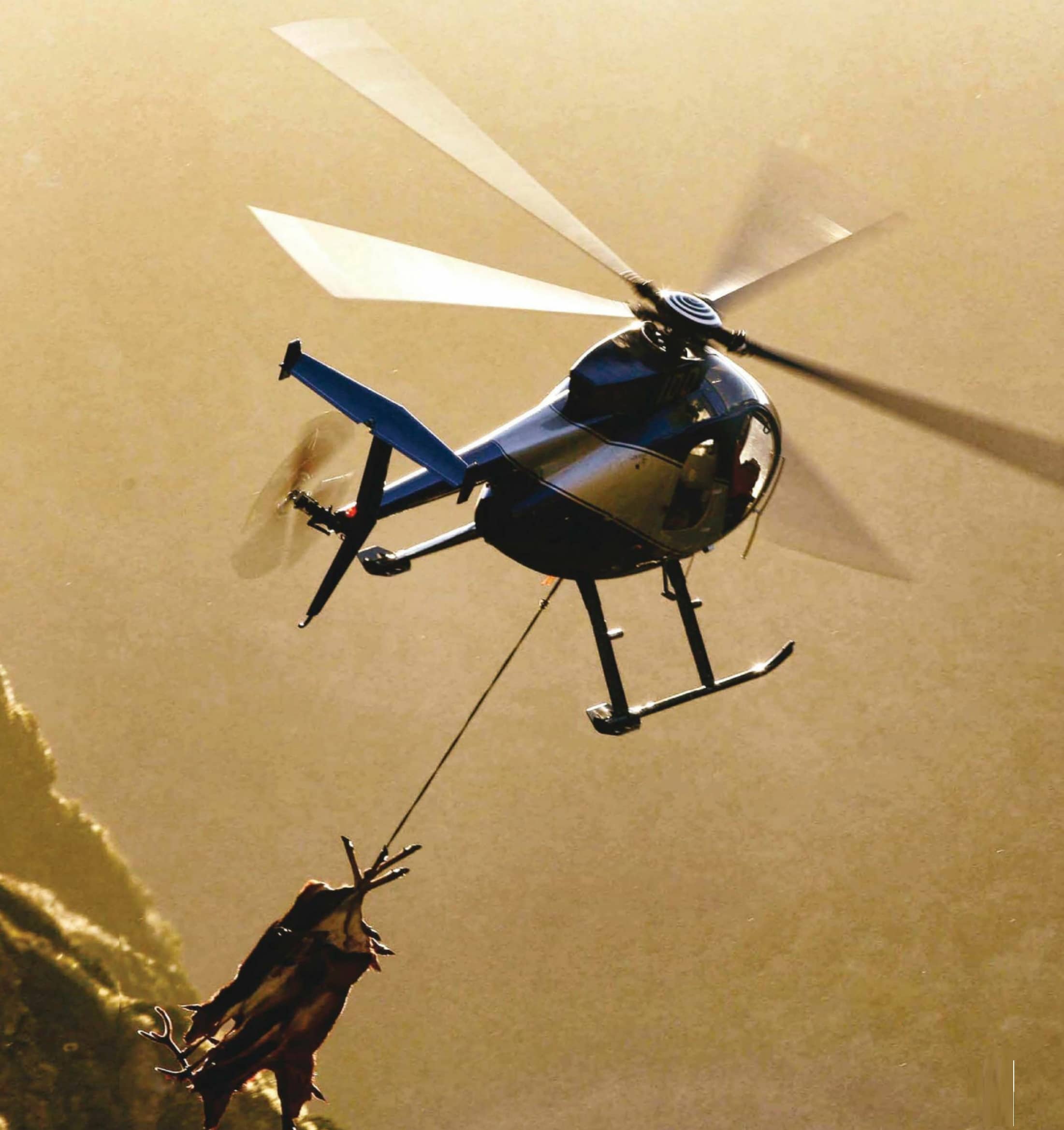 Lord of the Rings Meets Elk Hunting With Helicopters

In 1966, Richard “Dick” Deaker bought a World War II-era Tiger Moth biplane with money he’d earned as a young deer hunter hired by the New Zealand government in the South Island’s Fiordland National Park. Culling the red deer that had been destroying native vegetation was lucrative employment, and Deaker had a little inkling then how hunting and flying would become such intertwined trades in years to come. At 21, it was an impulse buy with surplus cash. His mother took one look at the plane and told him he’d be dead in a week.

“I tell you what, I never forgot that,” says Decker, who still flies commercially at age 75, with more than 50 years and thousand flight hours behind him. He keeps a photo of that plane on his lounge room wall above his chair, flanked by windows that look out to the edges of the 3 million acres of Fiordland and the Murchison Mountains where he was first hired on as a hunter at 19. Deaker would go on to use the flight hours he had accumulated in that Tiger Moth to become a helicopter pilot in 1972, surviving an adrenaline-fueled and deadly sliver of history when aviation and hunting came together, known here as the “deer wars.”

Red deer were first introduced to New Zealand from England and Australia in 1861 for sport by early settlers. In 1905, 18 wapiti — the Native American name for elk, still used in reference to the species in New Zealand — were gifted by U.S. President Theodore Roosevelt, and once released, interbred with the red deer. Without natural predators, deer numbers rapidly increased — as did other introduced species such as chamois, tahr, and the rusa, sika, and sambar deer — leading to widespread damage and near elimination of several native plant species in the alpine area. Their grazing became an agricultural bane to farmers. By the 1930s, the government had lifted most hunting restrictions on deer in an attempt to halt their alarming population growth, and finally began hiring hunters, leading to the commercial culling industry of the 1960s. But because of Fiordland’s dense bush, keeping deer numbers manageable with ground hunting was a losing battle as the deer would retreat into steep and inaccessible terrain — until helicopters were introduced. Incidentally, this coincided with a new demand abroad for deer meat. Hunters previously contracted for culling purposes of a noxious animal alone, now had incentive to recover the carcasses from remote areas. As prices rose to NZ$ 1 a pound by the early ’70s, pilots and shooters — employing risky and often death-defying maneuvers by air — were now able to kill and recover between 100 and 200 deer a day, raking in close to $20,000 by the afternoon. 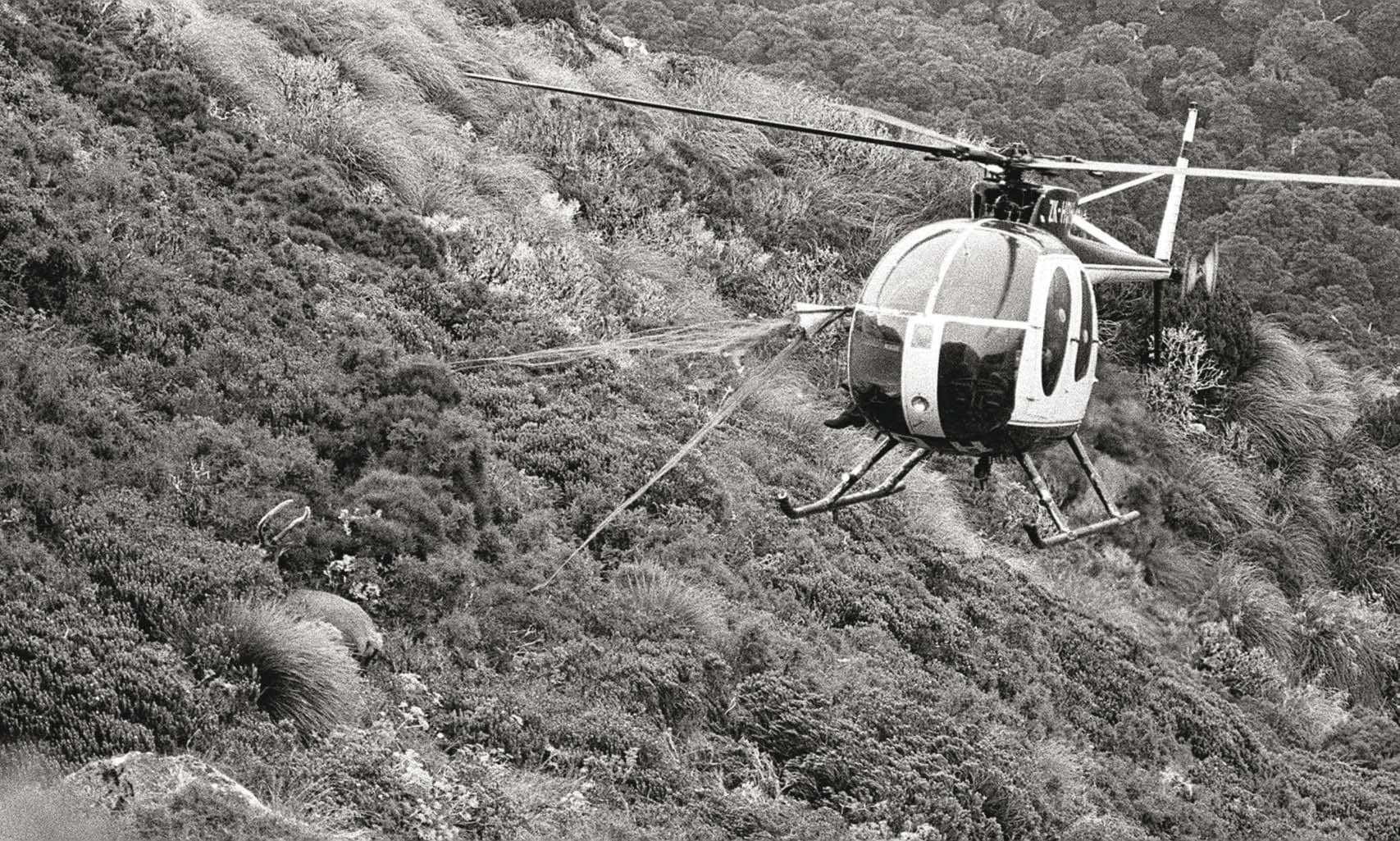 “It was a very, very heady time,” remembers Kim Hollows, a Te Anau pilot who left school at 14 in the North Island and followed his brothers down to Fiordland in 1977 to become a deer hunter like them, in the same company as Deaker, based out of Te Anau in the “venison rush” years. “It was a real frontier town then — no rules. Kids were treated like adults if you could do the work. It was like the wild west,” he remembers, describing “some competition” between chopper teams. News articles from those years go into more detail: poaching by rogue helicopter hunters, helicopters being shot at from the ground, chopper sheds being set on fire, and sand being put in engines. Hollows, who quickly saw a future for himself here, fist-fought his way into a training helicopter for flight hours (“you literally had fist-fights happening between the young guys in front of that helicopter”) and got his pilot’s license the day he turned 18, which was a normal progression for many hunters who transitioned into a role that called all the shots.