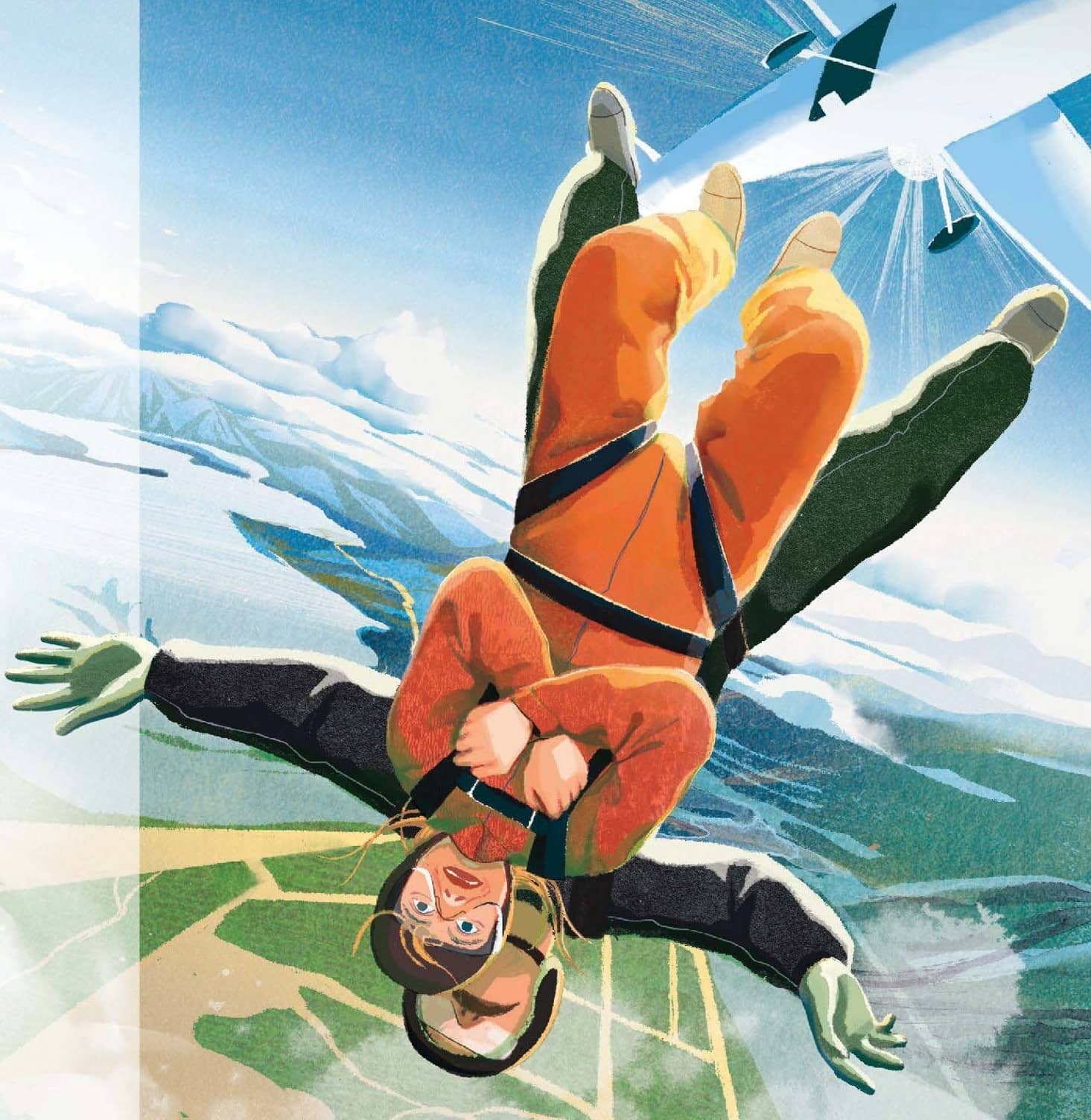 In the last moments before I climbed into the Cessna, I turned and faced a young bearded man who was pointing a video camera at my face. I wore a jumpsuit made of panels of fluorescent orange and green fabric, the colors faded by years of sun and wind. A pair of goggles and a leather helmet were strapped on my head. “Why are you here?” the man asked me.

I took a deep breath. “My name’s Eva,” I said, speaking to the camera lens, “and I’m here to face my fear of falling from heights.”

The small crowd that had gathered around me oohed and cheered as I crawled into the tiny plane, awkward in my elaborate harness. Only the pilot had a seat—all the others had been removed—and I sat on the floor behind him, facing backward, spooning with my divemaster, Barry. Another pair climbed in beside us: divemaster Neil and his charge, Matthew, a first-time skydiver like me.

They sat by the open doorway, and Matthew and I bumped fists as the little Cessna rattled its way down the gravel runway. Matthew looked elated. I knew I was supposed to be excited, too, but I couldn’t get there. For the moment, I existed in a bubble of cold calm. That, I figured, was preferable to the likely alternative: wild, hair-tearing panic.

I was acting on a very popular idea: the notion that facing one’s fears is the key to conquering them. In their third year at Hogwarts, Harry Potter and his classmates are taught by Professor Remus Lupin to face down their fears by laughing at them. In The Sound of Music, the abbess tells Maria she must confront her feelings not hide out in the abbey. And in the novel Dune, in the iconic Bene Gesserit “Litany Against Fear,” Frank Herbert wrote, “I will face my fear. I will permit it to pass over me and through me ... Where the fear has gone there will be nothing. Only I will remain.” Fear, Herbert wrote, was the mind-killer. I wanted my mind to live.

I’D ARRIVED AT the small airstrip in the Canadian village of Carcross Desert, billed as the world’s smallest, a tiny collection of soft, rolling dunes surrounded by snow-etched mountains and boreal forest. Every summer, a skydiving outfit based in British Columbia caravans up here for a couple of weeks and offers people the chance to jump out of a plane, plummet through free fall, deploy a parachute, and eventually land in the forgiving embrace of this tiny patch of sand.

The pro skydivers live by the airstrip, just outside the village. The vibe of their encampment is somewhere between summer weekend campout and itinerant circus troupe. They gather in a jumble of tents, U-Hauls, cars, RVs, and trucks loaded with campers. Barry is their patriarch. When I met him, he’d been jumping for 39 years, including more than 2,000 tandem jumps with clients. He had gray hair and a gray mustache, a big belly and a bigger voice. He’s not what you picture when you think “professional thrill-seeker,” but I found his age and experience more comforting than any young gun could have been. As they say in Alaska, there are old pilots, and there are bold pilots, but there are no old, bold pilots.

When I pulled up, just before 10 a.m., most people were gathered in camp chairs around a fire. I was invited to sit down, offered tea and a hunk of fry bread. I was here because my three most potent physical fears are of heights, speed, and falling. And there was nothing, I figured, that combined all three as effectively—or as horrifically—as skydiving. My notion was to take a blitzkrieg approach to facing my fears. I would force myself to do the scariest thing I could think of, in a full sensory assault on my fear response, and if I came out the other side, I would be ... changed, right? Empowered. That was the idea. So far, I just felt sick and scared.

BARRY INTRODUCED US first-time jumpers to the gear we’d be using, explained how the various safety mechanisms worked and informed me that if I tried to grab on to the plane as we jumped, latching on in a last-minute panic, he would break my fingers to release my grip if he had to. His tone suggested that it wouldn’t be his first time doing so.