Rescue in a Bottle 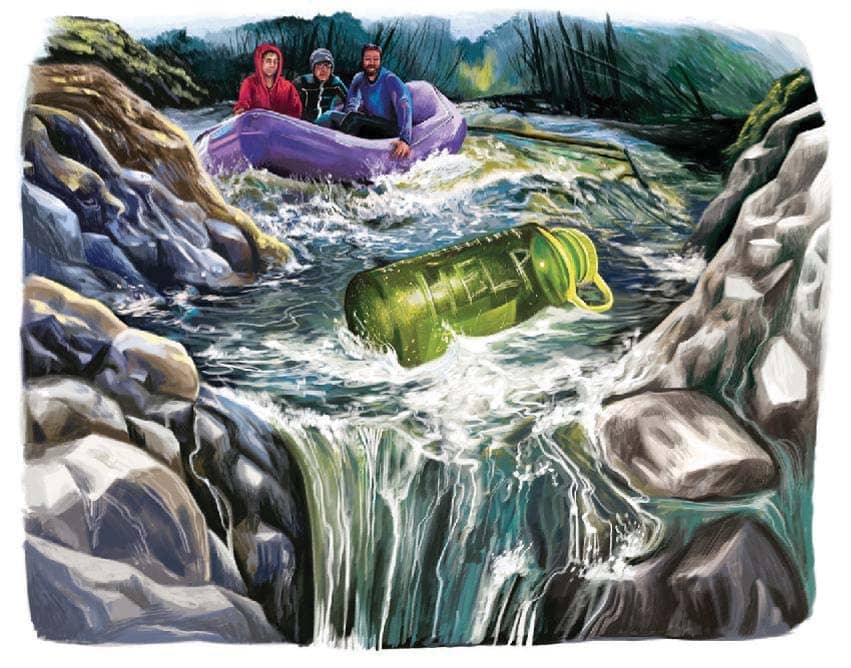 Curtis Whitson knew the waterfall was coming. He’d rafted down the Arroyo Seco, a river in central California, before. He figured he would hop out of his raft into the shallow water, rappel down the rocks on either side of the falls, and continue on his way, as he had on a previous trip.
Jen McCaffery

But this year was different. Heavy snow and spring rains had turned the usually manageable falls into something fierce. And this year, instead of his buddy, Whitson’s companions were his girlfriend, Krystal Ramirez, and his 13-year-old son, Hunter. As the three of them approached the falls late in the afternoon of the third day of their camping trip, Whitson could tell from the increasing roar of water in the narrowing canyon that they were in serious trouble. There was no way they’d be able to rappel down the rocks as planned.

“The water was just gushing through there with tremendous force,” recalls Whitson, 45.

They could wade to the shore, but would anyone find them there? They had no cell service, and they hadn’t seen a single person in the past three days. And Whitson knew that they’d be sharing the ground there with rattlesnakes and mountain lions.

As he pondered what to do, Whitson hit on a bit of luck—he heard voices coming from the other side of the falls. He yelled, but the sound of the rushing water drowned him out.

We have to get these people a message, Whitson thought.

He grabbed a stick and pulled out his pocketknife to carve “Help” in it. Then he tied a rope to it so the people would know it wasn’t just any stick. He tried tossing it over the falls, but it floated away in the wrong direction.