HEROES IN THE HEARTLAND 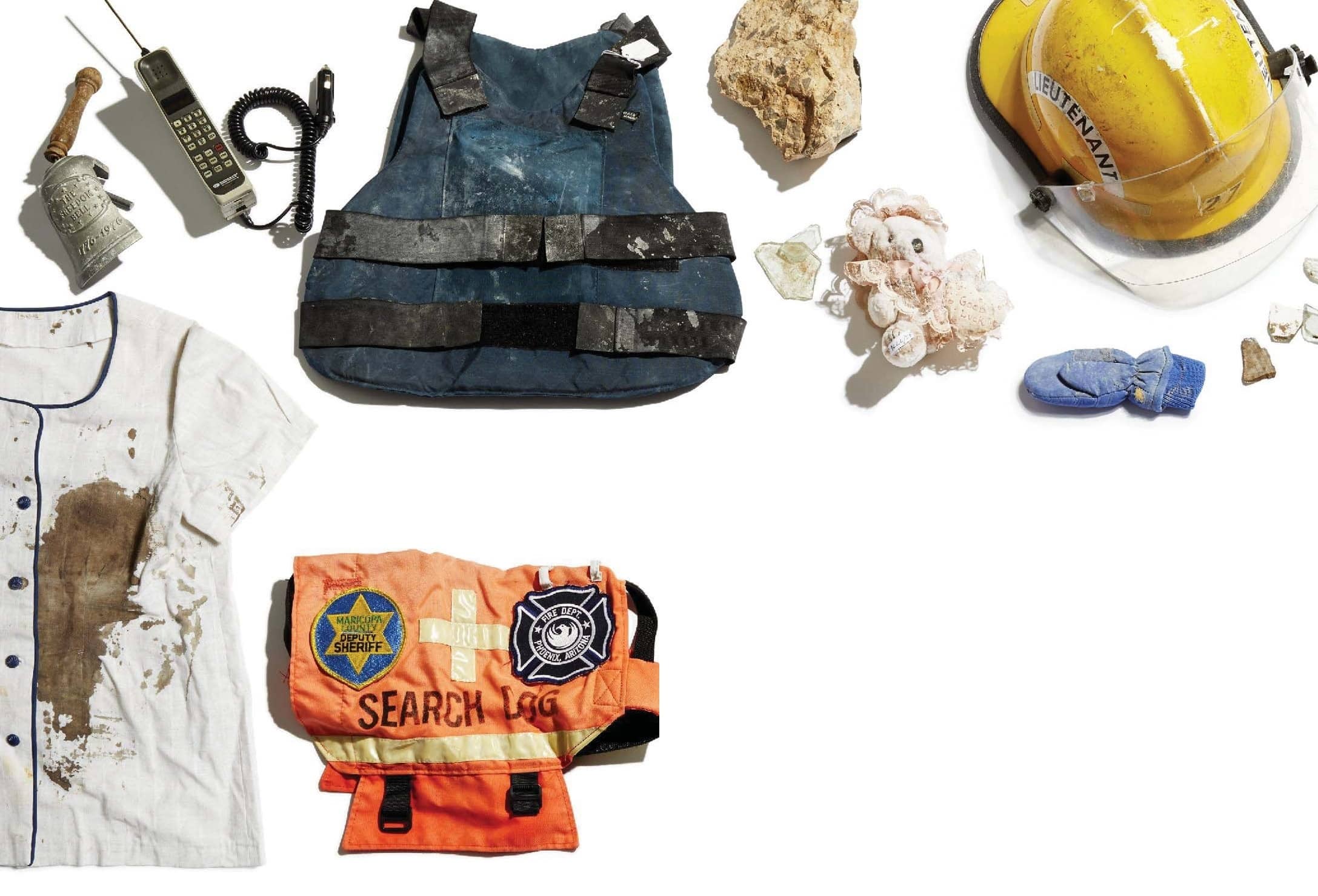 It has been 25 years since a truck bomb ripped through a federal office building in Oklahoma City. The tales of courage and survival amid the horror that day are as searing and inspiring as ever.

Henry Hurt
At around six on the morning of April 19, 1995, the area around the nine-story Alfred P. Murrah Federal Building in the heart of Oklahoma City began to come alive as hundreds of people—workers, visitors, folks with government business—converged on the downtown area.

Among those heading toward the building that day was a man driving a large yellow truck, its sides emblazoned with the black-lettered logo Ryder.

Inside the 20-foot truck were 4,800 pounds of a ghoulish, volatile mixture of diesel fuel oil and gray ammonium nitrate fertilizer, which filled as many as two dozen 55-gallon blue plastic barrels. The entire truck was a lethal bomb.

Shortly before 9 a.m., the man pulled the yellow truck up to a parking spot on the street in front of the Murrah Building. The truck was just east of the center of the north-facing building. Thirty feet away, above the entrance, the children of the America’s Kids childcare center were playing. Some of them had parents who worked in the 18-year-old glass-and-granite-clad building, which housed 16 federal agencies. 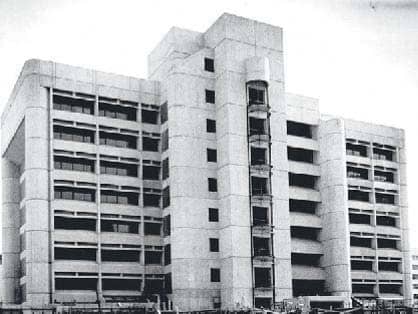 Just a few minutes before 9 a.m., the man lit the fuse and walked away. In the daycare center, the smallest children had been placed in their cribs to settle down for naps. The older children sang their favorite songs, then had free time to play.

The fireball that hit the Murrah Building seven-thousandths of a second after detonation put 1,000 pounds of pressure on every square inch of the structure’s surface. It lifted all nine floors upward shearing off the connecting steel reinforcing bars (called rebar) and demolishing three of the building’s major support columns.

Desks, file cabinets, and chairs became deadly shrapnel. Chunks of concrete—ranging from fist-sized to wall-sized—were tossed about. Millions of shards of glass, as well as plastic from the bomb, became sharpened daggers that sliced through the air at the speed of bullets.

In violent undulations, whole floors were ripped loose from their moorings. Then, yielding to gravity, the floors collapsed, sandwiching together and funneling thousands of tons of debris down toward a giant crater blasted out by the bomb. 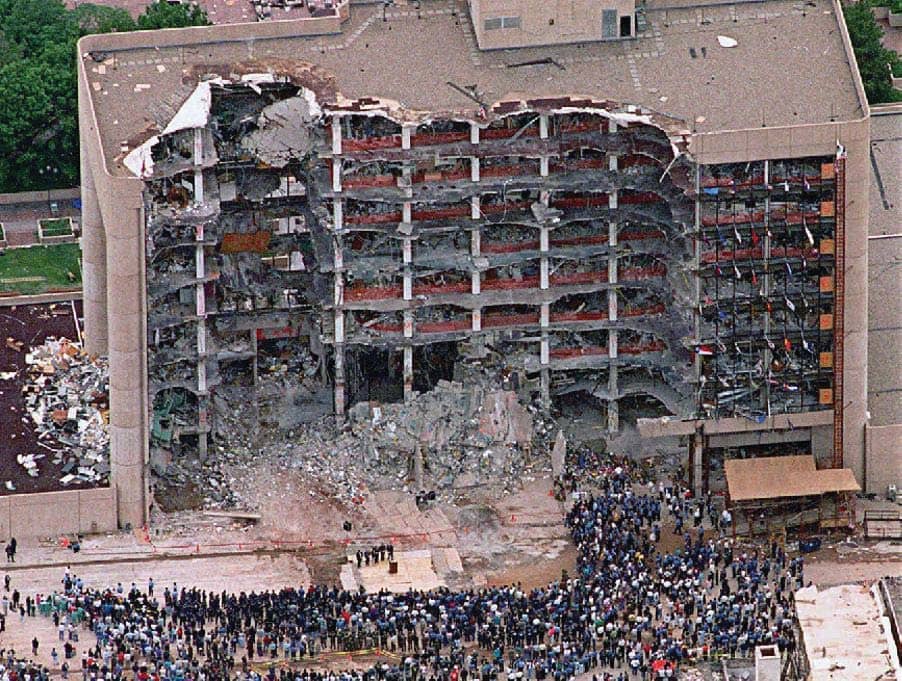 A few minutes after the blast, a breeze lifted the smoke and dust, and sunlight flooded the groaning carcass that the Murrah Building had become. Its cheerful face was gone— completely ripped away. The cavity carved out by the bomb reached almost to the rear of the structure. Daylight shone clearly from the other side. Twisted cables spilled from the top. Grotesquely contorted rebar jutted wildly in all directions. Fire and burglar alarms shrieked from nearby buildings, which took some of the brunt of the explosion.

Within minutes, a rallying cry spread through the confusion: the childcare center. It was obvious that those children were the highest priority for rescue. With sirens drowning out the crescendo of screams, rescuers by the hundreds began to arrive. They struggled into the jagged heaps of rubble, seeking America’s Kids on the second floor.

But soon they realized there was no childcare center. There was no second floor.

What rescuers did find as they clawed through the wreckage was what had been left behind by the children: pieces of clothing, shredded books, a small crumpled shoe, a crushed toy, a stilled mobile. Most horrifying, however, was the almost unspeakable human evidence of the powerful evil that had descended upon this place: a baby’s arm, a battered torso, a chubby finger.

One of the first into the building was Det. Sgt. Don Hull of the Oklahoma City Police Department. He and fellow officers crawled through mazes of twisted rebar and shifting concrete slabs. The air was so thick with dust that rescuers—many of them, like Hull, dressed in business suits and with no special equipment—were forced to take breaths as shallow as possible.

Early on, Hull saw a baby in the rubble he thought to be dead. A massive gash marked the side of its face, but there was no blood, and no movement. The baby’s arm was twisted around so grotesquely—nearly wrung off—that bone protruded from the biceps.

For some reason, Hull stopped just a moment to pick up the dead baby and straighten out its arm. “I heard a huge gasp,” Hull says. “And blood burst from the wounds, as if jostling the body somehow started the heart going.”

Hull pressed the infant against his chest, holding the mangled arm in place, and began crawling upward through the heavy rubble. He and his fellow officers had been handing off living victims in a sort of bucket brigade to the outside. But Hull was afraid the baby’s arm would fall off if he did that. So he struggled on.

When the baby stopped gasping, Hull began to administer rudimentary CPR, breathing into the child’s mouth and nose. This happened twice on the way out. As Hull broke from the building and headed for the closest triage area, he found himself screaming over and over, “Breathe, baby, breathe!”

As he reached an ambulance, Hull saw a couple running toward him— the woman screaming that it was her baby in his arms. Hull swiveled away, not letting them see the child. “I couldn’t let them look,” he says. “It was too horrible. The baby probably wasn’t going to make it, and I didn’t want that to be the last sight they had.”

“Hold the arm tight!” he yelled to a paramedic, finally handing the baby off.

It was 9:30 a.m., and Hull, like so many others, would be there for hours—until he quit from exhaustion. 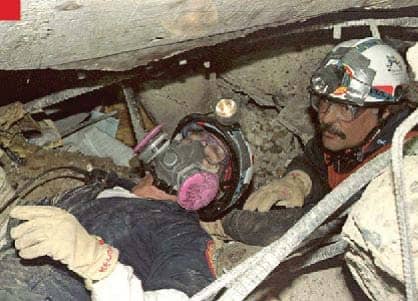 The initial response of local medical teams was as impressive as that of the police, fire, and rescue units. Melissa Webster, a manager at an ambulance service, was at the scene with an ambulance 90 seconds after the blast. Fearing that her own trembling building was about to collapse, she had fled from her desk to the street and had seen the black smoke rising six blocks to the south. She and a colleague leaped into an ambulance with six other paramedics.