WHAT'S WRONG WITH ME? 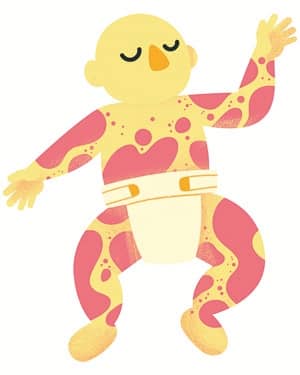 DAVI WAS THE picture of health when he was born in the summer of 2010 near the city of Salvador, Brazil. He was a chubby, full term baby and breastfed easily, to the delight of his young rst-time parents, Carla and Andre. But when Davi was just four months old, a red, blotchy rash began to spread across his chest.

Andre earned a meager wage working on a fruit farm, and Carla was unemployed. Like many low-income Brazilians, the family didn’t have a physician or pediatrician. Instead, over the next month, they visited a series of clinics. Each time, a new diagnosis was oered, along with treatment. Davi’s parents were told their son might be experiencing eczema, an allergic reaction to something in the environment, or scabies from skin mites. Following the doctors’ instructions, Carla and Andre diligently applied antifungal cream, antibiotic ointment, and then a corticosteroid to Davi’s chest. But none of it helped.

In fact, the rash began to spread, with widening areas of scarlet, and angry bumps that would peel and turn raw. Davi was in pain and became increasingly fussy.