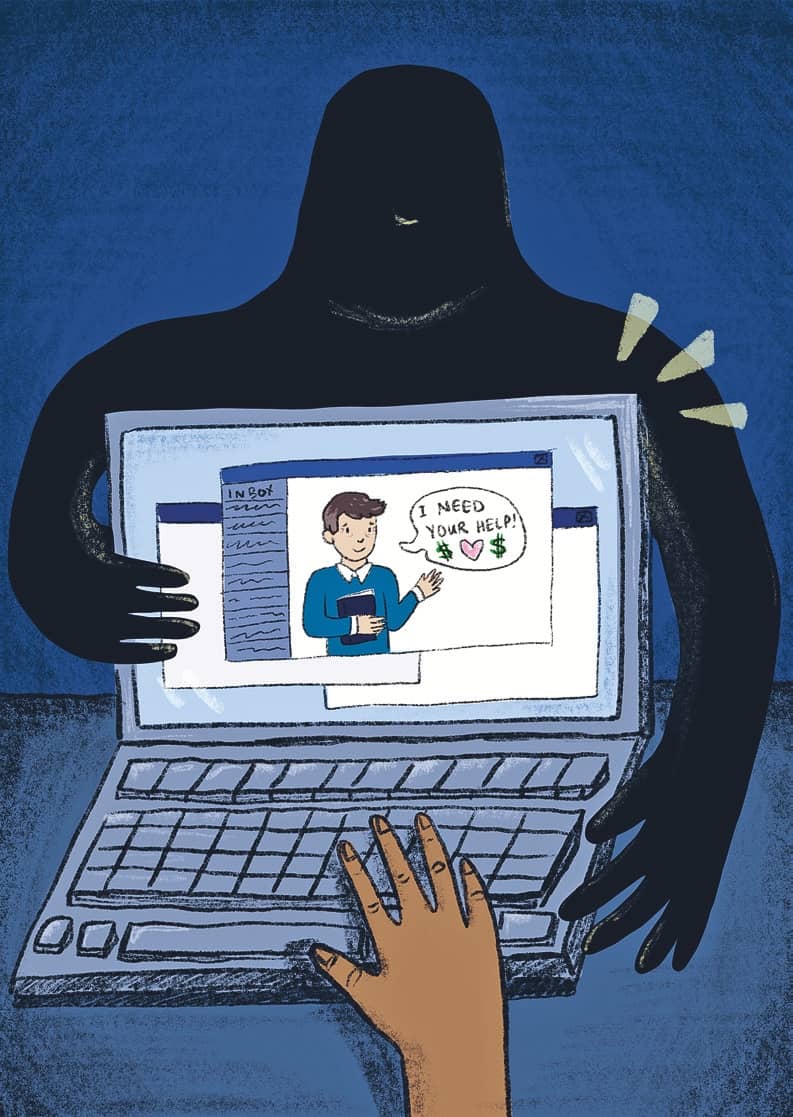 Even the most savvy among us can fall for a con and lose hundreds of dollars. I learned this first-hand when an imposter’s plea arrived in my inbox.

THE EMAIL POPPED up on my screen at 6:45 a.m. on December 24 last year. I’d already been up for a couple of hours, working to a deadline. It was from someone I know quite well: the minister of West Vancouver’s North Shore Unitarian Church, which my family attends.

“I need a favor from you,” the message said. “Email me as soon as you get my message.”

A friend was in the hospital battling cancer, he said, and he’d just learned she was scheduled for surgery that night. Could I possibly pick up some iTunes gift cards? “She needs the cards to download her favorite music and videos to boost her condence on her next phase of surgery.” He’d do it himself, but he was tied up, he explained. “I will surely reimburse you as soon as I can.”

No one else in the house was up, so there was no one to run this by. But then, I probably wouldn’t have asked for a second opinion anyway. It didn’t really occur to me that this might be a scam.

“Thank you so much, Bruce,” my correspondent replied. when he got down to business. I was to buy $300 of iTunes credit. (that is quite a lot of music, I thought.) “I need you to scratch the silver lining at the back of each card to reveal the redemption code, then take a snapshot and send them directly to Sharon’s email.” He gave the address.

God bless? We’re Unitarians. Optimistic agnostics at best. the “G” word doesn’t come up much. Totally weird sign-o there. I assumed Ron’s mind was still on the dire circumstances of his friend Sharon, who was evidently a Christian.

“I can pick up the card around noon and engineer this by tonight,” I replied.

WORD OF MY GIFT CARD APPARENTLY CIRCULATED AROUND THE HOSPITAL. THEY WANTED $500 MORE.

He was super grateful, he replied six minutes later, but that would be too late. “Can you please send them to her by noon so she could be able to use them before her surgery?”

This was awkward timing. But hey, what was my slight inconvenience against this woman’s cancer fight—on Christmas Eve, no less? I drove to the grocery store and purchased four gift cards. The clerk activated them at the till. At 9:30, I emailed pictures with the following message:

The codes on the cards below will buy your music via iTunes.

Everybody is pulling for you.

A BUSY CHRISTMAS eve day then unfolded. I forgot all about this until, around 4:30 p.m., while waiting for takeout fish and chips, I checked my email. A follow-up message—one that contained some odd grammar—was sitting in my inbox.

“Sharon just emailed me now saying she got the cards. I want to really appreciate you for that. I’m sure it’s going to go a long way in her fight over cancer.”

But now there was a new development. Apparently, word of the gift cards had made its way around the cancer ward. Other patients were asking Ron for the same thing.

“Could you please get me an additional $500 worth of iTunes gift cards right away? I will be paying you back $800. I’m so sorry for the inconvenience.”

This was a bridge too far. The personal friend was one thing, but random strangers on the ward? I called Ron. “Hey Bruce. What’s up?” “Are we too late to help those other patients?” I asked. Silence. Then: “Um, I don’t know what you’re talking about.” “Those other patients on the ward who now also want music,” I said.