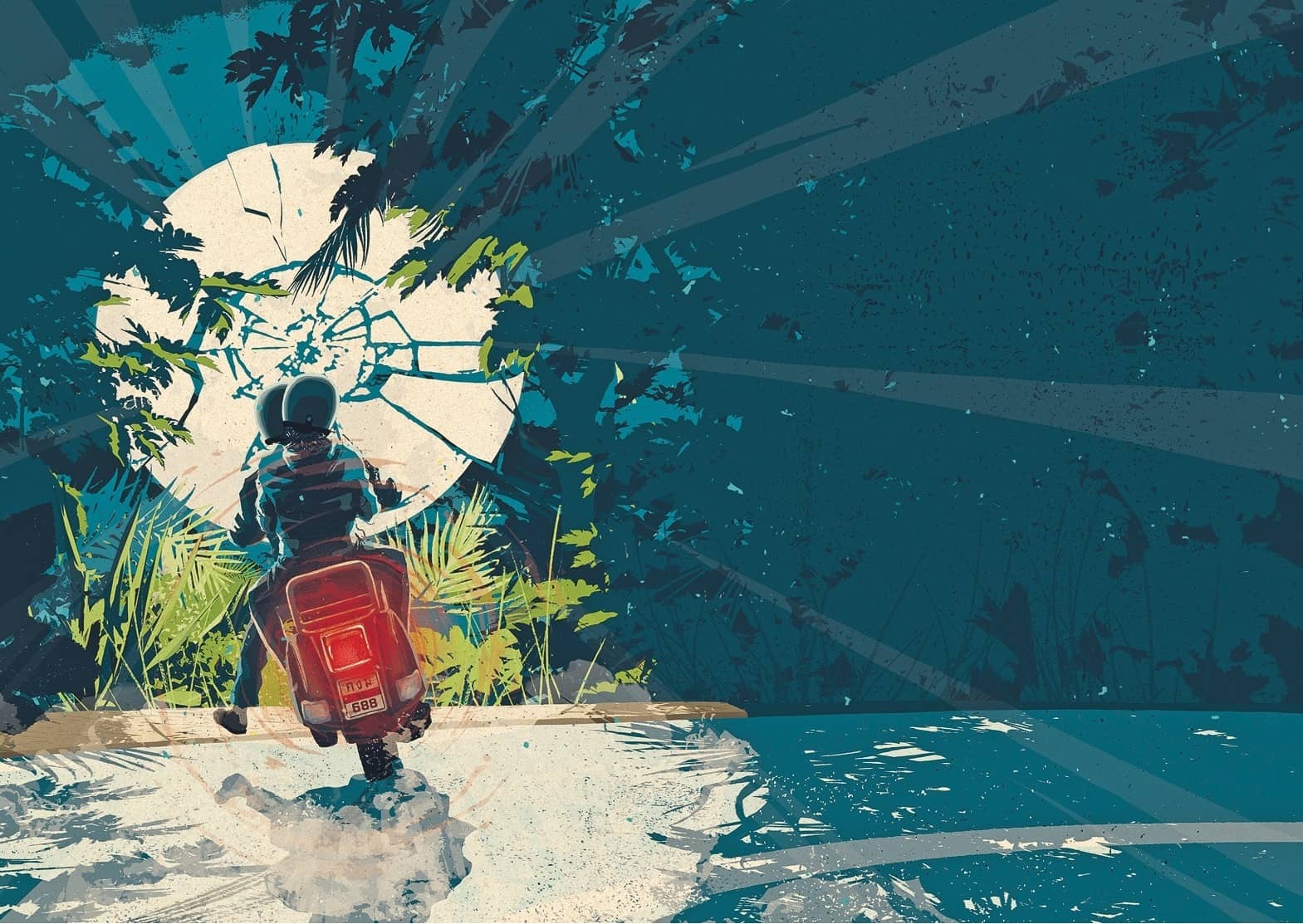 Michael Lythcott and Stacey Eno’s scooter ran off the road, leaving them broken, bleeding and trapped in a Balinese jungle. Worse: no one knew. Then Michael, hours from death, got a signal on his phone.
Derek Burnett

IN AUGUST 2018, Aimee Spevak rented a cabin in Pennsylvania’s Pocono Mountains to get away from the New York City heat. Like many people who can never truly break away from work, Spevak, a freelance medical writer, found herself stuck inside on a lovely summer day, finishing an assignment. In a moment of procrastination, she checked her Facebook news feed and was delighted to see a post from her friend Michael Lythcott.

Lythcott was an intrepid traveller. In fact, he and Spevak had trekked through Nepal together a few years earlier. Spevak knew he was at that moment in Bali, and she was eager to hear about his experience. But then she read the post. Rather than beautiful travel photos or a detailed narrative of Lythcott’s journey, there was a stark plea: “Help. In danger. Call police.”

LYTHCOTT, a 40-year-old web developer from the United States, had landed in Bali to meet his friend Stacey Eno, 27, just the day before. Excited for their adventure, the two Americans had rented a scooter on the outskirts of Ubud and driven into town, where they stayed late into the night doing what they both loved: chatting with strangers from all over the world.

It was well past 2 a.m. and nearly pitch-dark when they hopped back on the scooter and headed for their hotel. Lythcott had placed his iPhone in the pouch of the scooter and was using it to navigate. As they climbed a hill past the jungle, he glanced down at the GPS and back up at the road—and saw a curve ahead. Deciding not to try the bend, Lythcott hit the brakes—but his bike didn’t stop.

He awoke sometime later to the babble of water nearby. He was flat on his back on a steep slope, surrounded by vegetation. The jungle. He tried to sit up, but his body wouldn’t cooperate. What happened? he wondered. Where am I? Then it came to him. Bali. But why am I in the jungle? He strained to think, but his mind was a fog.

Oh man, I was in a scooter accident, he thought. That much came back to him, but nothing more. Nothing about flying 18 metres through the air down a ravine, nothing that explained the blood he could taste and the dull pain he felt all through his body.

He took stock. His glasses were gone. The scooter was gone, and with it his cell phone. His left wrist and torso were smashed up badly, as was his neck. Finally he called out to his companion. “Stacey! Stacey, where are you?” His voice came out surprisingly quiet. (He’d learn later that both his lungs had collapsed.)

Eno was only a few feet away. Lythcott dragged himself toward her through the darkness until he was beside her.

“We were in an accident. Can you move?”

“Stacey, I need you to get up and walk and get us help.”

This alarmed Lythcott. No one knew they were there. His neck was probably broken. We might die here, he thought. Making matters worse, he had begun slowly sliding down the wet jungle floor past thick-trunked trees.

“I’m scared,” Eno said. She sounded farther and farther away. At last, Lythcott came to rest in a tiny depression on the hillside, where he could grasp a tree root. There, in his nook, an eerie calm came over him. If he was going to die, let it be like this, in a peaceful place. Let him close his eyes and allow it to take him over.

No, he scolded himself. Stop thinking that way. You have to save Stacey.