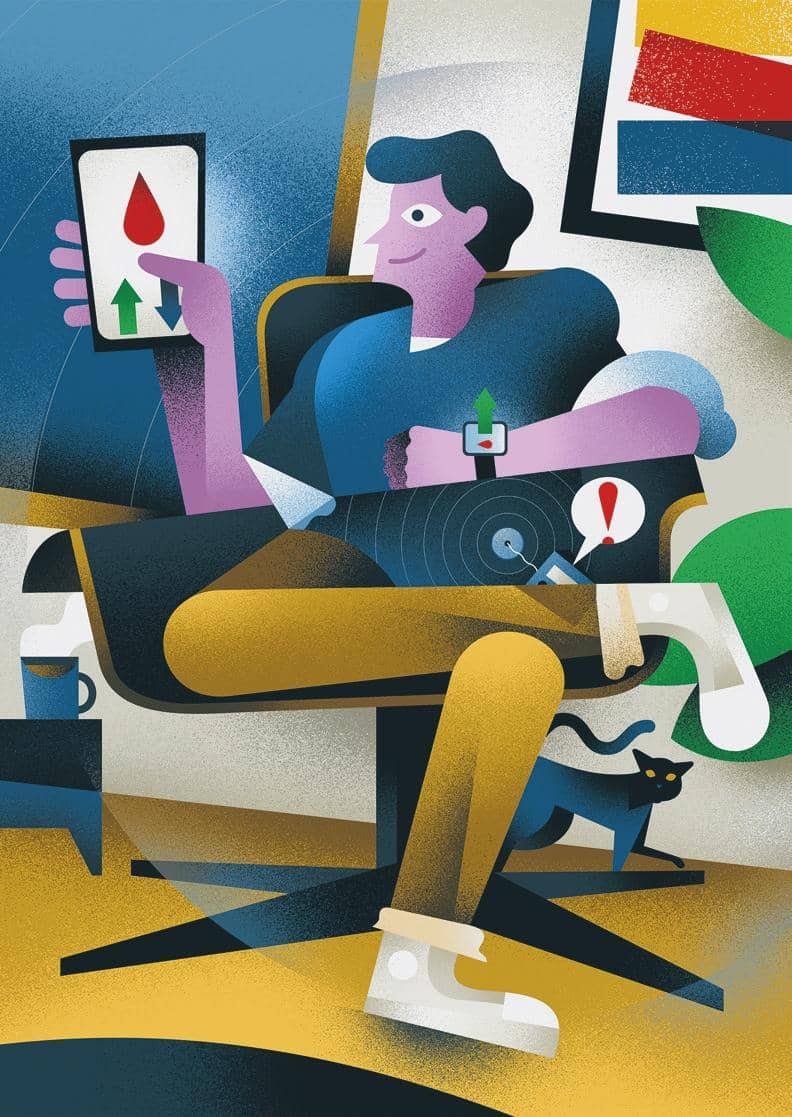 Jonathan Garfinkel
I WAS 12 WHEN my immune system suddenly wiped out the insulin-producing beta cells in my pancreas. The first symptoms arrived when I was in Paris, on a family vacation. I started urinating like crazy, drinking litres of water each day to compensate. My memory of the Champs Élysées is not the beauty of the architecture but the number of public bathrooms I had to duck into along the way.

It was 1986, a different era in diabetes care, and the doctors I eventually saw told me I could still eat whatever I wanted, so long as I injected enough insulin to compensate. I was told that diabetes is manageable, that you can live a good life with it—both mostly correct though not always straightforward. Yet my diagnosis still changed how I saw myself. I contained a flaw, my body now a series of problems that constantly had to be solved.

Diabetes is a tricky disease, both to live with and to understand. It all comes down to the pancreas: in normal circumstances, the organ produces insulin, a hormone that controls blood glucose. Diabetics either can’t produce enough insulin (which causes the more manageable Type 2 diabetes) or any at all (Type 1). Because of this, our bodies can’t handle the sugar we consume. When blood-glucose levels drop too low or surge too high, it can lead to serious health complications.

Thankfully, new medical and technological advancements have allowed Type 1 diabetics—myself included—the opportunity to live full, relatively normal lives. Insulin pumps let us forgo regular insulin injections: these small devices run a thin tube through a tiny hole in the abdomen to deliver a programmable stream of medication. Sensors, called continuous glucose monitors (CGMs), can be placed under a diabetic’s skin and will send updated blood-glucose levels to users’ smartphones every five minutes. Managing Type 1, however, is still a full-time job— one where, if you don’t do it just right, you’ll feel terrible. Or get sick. Or die.

The magic number for blood glucose is typically 5 millimoles per litre of blood, and consistently hitting it is a challenge, even with the most up-to-date tech. Diabetics still need to consider many factors to determine how much insulin they need to take: what they’ve eaten (and are going to eat), how much exercise they’ve done (and will do). Everything from stress to sex can affect blood sugar. The trick for managing it all is to think like a pancreas—a problem, since nobody really understands how a pancreas thinks.

But what if a computer could do all the hard work for you? Enter the artificial pancreas, the holy grail of diabetes management. Currently, a person might use both an insulin pump and a CGM to help manage their diabetes. Unfortunately, these pieces of tech don’t talk to each other. The person with diabetes is still the one who’s constantly making decisions, monitoring and taking everything into account. But an artificial pancreas, also known as “the closed loop,” uses a piece of code to connect them, mimicking a real pancreas. Once connected, the loop would work in the background like any other organ.

It sounds like the stuff of science fiction. Officially, it will be at least another few years before people with diabetes can obtain an artificial pancreas. But, unofficially, well, that’s a different story.

I FIRST MET Kate Farnsworth and Pina Barbieri in November 2017. The mothers are based in the Greater Toronto Area and both have teenage daughters—ages 13 and 15, respectively, at the time—with Type 1 diabetes. Farnsworth tells me about the fear she felt when her then eight-year-old daughter, Sydney, was diagnosed in 2012. She began looking everywhere for information—and hope.