The Rise And Fall Of Loon 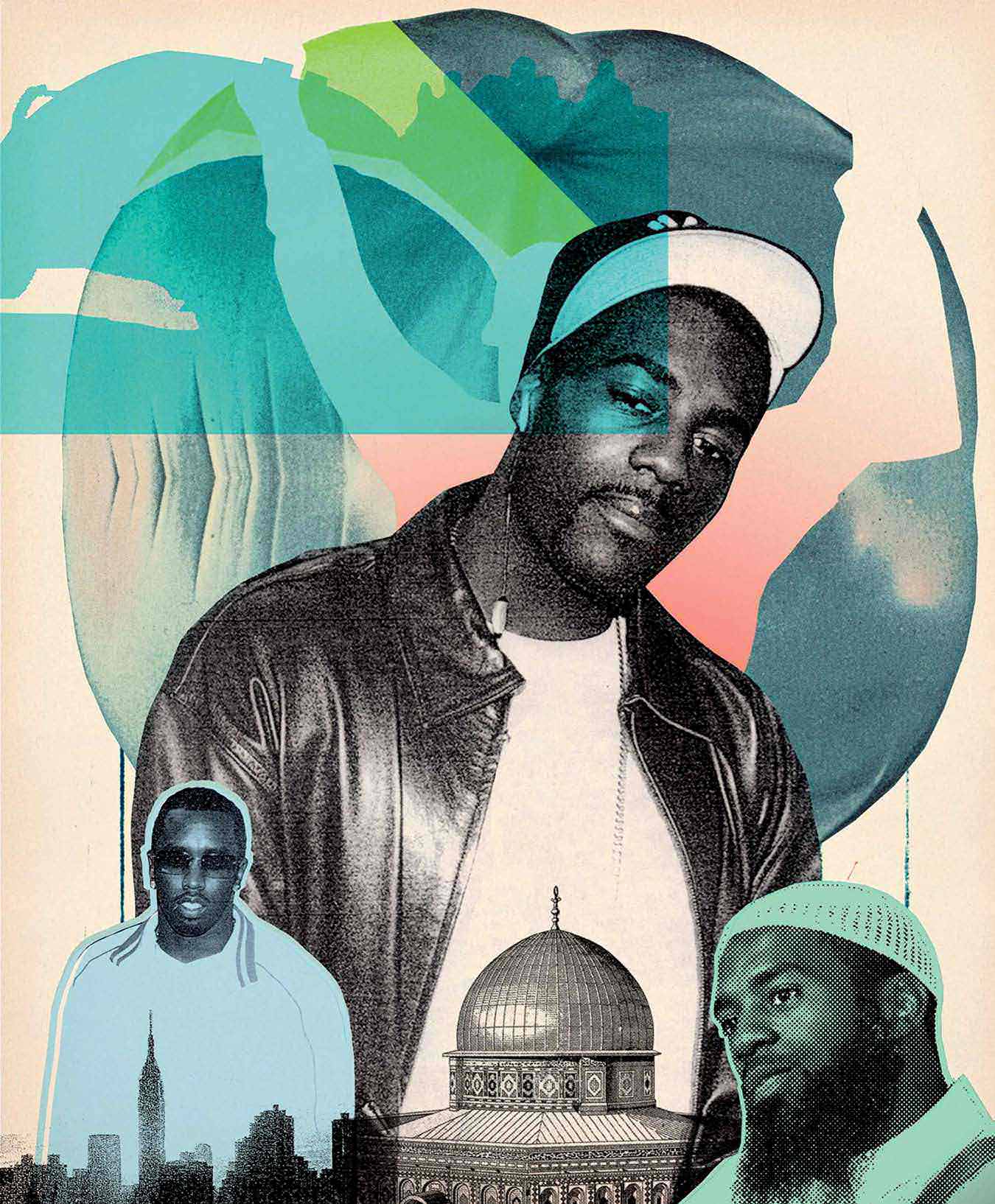 Chauncey “Loon” Hawkins was Harlem hustler royalty, a hit-writer for Puff Daddy and a crucial part of the Bad Boy Records family. He looks back at the wave that took him and the wreckage it left behind

The music video for “I Need a Girl (Part Two)” is peak Puff Daddy absurdity, a guys’ night out of epic proportions that begins with a helicopter landing and ends at a mansion party featuring a girl-to-guy ratio of about 10 to one. For Chauncey Hawkins, then known as the rapper Loon, it was the first time he felt like a hip-hop star.

Loon arrived on the Miami set that February 2002 afternoon with a plan. First, he selected his motorcycle for the video, settling on a Harley-Davidson chopper with ape-hanger handlebars that not only looked cool but provided a stable ride. He also decided to play to the camera. In his previous video with Puffy, “I Need a Girl (Part One),” Loon at times faded into the background. This time around he was more confident, brazenly elbowing his way into shots—dancing, champagne flute in hand, surrounded by women; leaning on a Ferrari 360 Spider as if he owned it; weaving through the streets of Miami on his bike alongside Puff and the R&B singer Ginuwine, appearing to be every bit as much a celebrity as his more famous collaborators.

But something else had changed since “Part One”: The fans on the set—the women in particular—weren’t there merely for Puff. “It was amazing to hear people actually screaming for me,” Loon recalls. “It was everything I had worked for, everything I had strived for.”

Then it all changed. Just as Hawkins had become Loon, Loon became Amir Junaid Muhadith, and then, in July 2013, he became a federal inmate in North Carolina. Far from the private helicopters and champagne flutes, Muhadith is loath to discuss the journey—his debauched life as Sean Combs’s wingman; the horrors of crack-era Harlem that he barely escaped; the sex, drugs and violence.

“How can I explain this without glorifying it?” he says.

Situated about 20 minutes north of Durham, North Carolina, the Butner Federal Correctional Complex emerges like a squat concrete box from the verdant undergrowth. It’s a sunny spring morning, and the visiting room is awash with friends and family of inmates. A little girl plays Connect Four against a man with tattooed knuckles. A woman wearing a Tom Brady jersey hugs an inmate. The world’s two friendliest prison guards man the front desk.

A bit past nine a.m., Muhadith, the man who revived Puff Daddy’s music career after writing the “I Need a Girl” series, enters the room. His standard-issue uniform consists of drab olive-green khakis, a matching button-down shirt and black Nike sneakers. For a man of 41, Muhadith sports a privileged, tight hairline. And though he’s gained 17 pounds since being incarcerated, he’s still in excellent shape thanks to daily calisthenics, cardio and the requisite lifting routine, though only to stay toned. “I can’t get prison swole,” he jokes. But what’s most striking is his majestic beard, an unruly gray-speckled mass that extends halfway down his chest.

Since this is a minimum-security building, little trouble brews here. Sure, tempers occasionally flare, as is natural when some 300 men share any institutional facility, but nobody would risk being sent up the road to a higher-security building. Muhadith scans the room. “I know all these guys,” he says. “You can tell who’s in here for drugs and who’s in here for white-collar crimes.” Jesse Jackson Jr. served time here. Bernie Madoff is in a medium- security building. “A spy, Spanish guy, Dominguez, was here,” Muhadith says. “He told me stories about [former Panamanian dictator Manuel] Noriega.”

Muhadith’s trip here began in December 2008 when he quit the music industry, converted to Islam and renamed himself Amir Junaid Muhadith. In 2010 he moved to Egypt, where he subsisted as a television host and nascent voice on the religious-lecture circuit. Then, in November 2011, he was arrested in Brussels Airport on felony drug charges. The indictment stated that Muhadith “knowingly and intentionally conspired…with others, known and unknown, to possess with intent to distribute” heroin in North Carolina between 2006 and 2008. He pleaded guilty upon his extradition to the United States. According to Muhadith, he had two felonies already under his belt and risked getting 25 years to life if he went to trial. He couldn’t take that chance. He was sentenced to 14 years in prison.

Muhadith calls it “guilt by association. Everything was hearsay. There was no tangible evidence.” To hear him tell it: One night at Hot Beats Recording Studio in Atlanta, a rapper he was advising asked Muhadith to introduce him to a heroin supplier. Muhadith complied, which he says was the end of his involvement but enough to place him under the umbrella of conspiracy once federal charges were brought against the other artist.

Muhadith says there are discrepancies in the case, including one that should have gotten it thrown out: The indictment states that he was involved in this conspiracy from 2006 to 2008. But, he says, he didn’t meet the individual until 2008. Why did he even make the introduction? “That, um, was just me being stupid, really,” he says wistfully. “It was just a brief introduction. It cost me 168 months.”

Muhadith, who sprinkles his speech with Arabic and verses from the Koran, remains upbeat despite his long sentence. “The thing that makes this easy for me is my religion,” he says. “As long as I accord to what Islam teaches, it doesn’t matter where I’m at.”

He is, in other words, firmly in the present—though at times he’s like an old guy at a bar, reminiscing about his heyday. “I’m actually grateful that those things happened,” he says, “because all those events led me to where I am now.”

The Harlem of Amir Muhadith’s formative years didn’t resemble the glories of the Harlem Renaissance or the gentrified neighborhood it is today; some of the brownstones featured on Million Dollar Listing New York were crack houses when Loon walked these streets. In his Harlem, kids grew up fast; Muhadith spent his boyhood fighting, selling crack, smoking weed, snorting coke, shooting dice and having sex with older women. “I grew up exposed to a lot of criminal behavior,” he says.

His parents, William “Hamburger” Hughley and Carol Hawkins, were dubbed the Bonnie and Clyde of 116th Street, hustlers who profited from Harlem’s heroin epidemic in the 1970s. Burger was sporty, stylish. He also may not be Muhadith’s biological father. Carol worked for the drug lord Nicky Barnes, dubbed “Mr. Untouchable” by The New York Times Magazine. When she became pregnant, Carol says, Barnes threw her a million-dollar baby shower.

Born in 1975, Muhadith had everything growing up but supervision. “I was a great provider, because I hustled,” Carol says. “It didn’t change until he was about five, which was when a lot of the crackdown started. Then that crack demon came along.” Barnes was sent away in 1978, a few years before crack replaced heroin as the neighborhood scourge. By the time that transition was complete, in the mid-1980s, Carol, once a budding queenpin, was a junkie.

While Carol battled addiction, her mother, Evelyn Hawkins, a pious beautician, and her father, John, a World War II vet, raised Muhadith in Esplanade Gardens. The 1,872unit complex situated on the Harlem River was originally sold as a middle-class oasis with an Olympic-size swimming pool and the subway at its doorstep. But when Muhadith was 14, one of his friends was shot outside building number four.