Is Lagos the Most Dangerous Party City On the Planet? 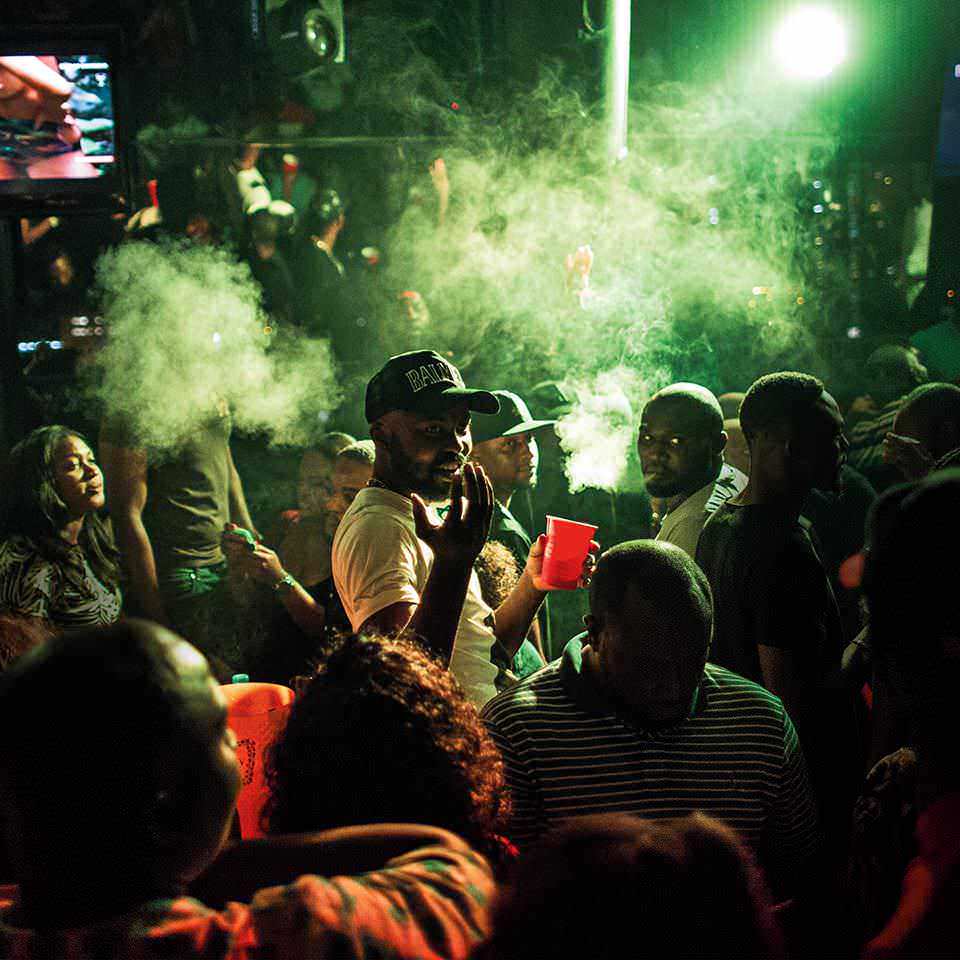 With Nigerian music influencing America hip-hop and EDM, Adam Skolnick travels to the world capital of Afropop and finds a city that's both captivating and conflicted.

It was midnight on Saturday and the club was heating up. Some men were decked out in black tie, others in Ankara print caftans and matching fezzes. They leaned on the bar in double-breasted sports coats and Windsor knots, and glided across the dance floor in high-dollar sneakers, draped in silver and gold chains, eyeballing women of all shapes and shades who dazzled in designer gowns, slinky dresses, short shorts or miniskirts, by turns accentuating or revealing ample curves, long legs or an elegant neckline.

It was my second night in Lagos, Nigeria, and once more I was in a room of clinking glasses and rumbling bass, a room filled with Nigeria’s upper crust bouncing to indigenous Afro-pop. Everything was washed in hot pink. Beams from a bank of rotating lights glinted off gaslight chandeliers and mirrored ornaments behind the bar. Bottles of Dom Pérignon set in buckets of dry ice left vapor trails as they streamed from the bar in the arms of statuesque African beauties conveying them to booths manned by oil or telecom executives, real estate developers, entrepreneurs and their guests.

Many of them, still in their 20s and 30s, were already millionaires, and all of them were hustlers. This was Lagos (pronounced “lay-gos”) after all, and one conceit is that everybody here has three hustles: An oil mogul may also own a restaurant while bankrolling a recording session with an up-and-coming MC. On the street level it’s no different. In this export-dependent, corrupt, dangerous city, whether you’re living high or low, one job never feels like enough.

And the never enough is why I was there. The truth is, I was the jaded traveler incarnate. I’d been to 45 countries on six continents, reporting, adventuring and partying. The road was alive, and each destination had its own distinct flavor. Whenever I’d sacrificed comfort, I typically earned a double shot of authenticity and inspiration.

Then, sometime in the past decade, authentic flavor became hard to find. The 21st century travel landscape has morphed into a dreaded sameness in the form of ubiquitous craft cocktails, gourmet small plates and high-tech hostels designed to look and feel like an MTV wonderland. Canopy walks are no longer an exotic promise from a singular lush rain forest but an expectation too easily realized. The bars, the beaches, the hotels, the city streets, the adventures seem attuned to the collective globalized culture rather than rooted in their own timeless traditions and natural gifts. All of which is only augmented by too many Google Earth views and TripAdvisor consultations.

But Lagos, for all its money, glamour and status as the world capital of Afropop, seems immune to all that. Thanks to its crime- riddled reputation, it has become the dark frontier of the global party circuit, a place of cognac-washed clubs, B-boy block parties and Afrobeat root systems. There are no carbon-copy full-moon raves or overly organized pop festivals featuring homogenous EDM robots with $100 haircuts. Instead Lagos offers the elusive electrical charge that all travelers crave: the authentic, even if that means having to watch your back on the street at all times.

Out in front of Sip Lounge, blinged-out revelers, the ajebotas (“butter eaters,” Yoruba slang for rich kids) stepped from tinted Range Rovers and Lexus SUVs amid nearly invisible beggars— the disabled, the orphaned, the displaced. Along the way they kept their eyes peeled. It wasn’t the beggars they were concerned about, nor was it the overt presence of danger that raised their antennae. It was the potential for mayhem.

Every privileged soul I met in Lagos had at least one story about staring down the barrel of a gun or the edge of a knife (the poor and working class are mugged and robbed just as often), and there were few better targets than the players heading to Industry Night at Sip Lounge. Lagos is a city of approximately 20 million people where some 9,000 millionaires float upon a sprawling mass of ajepakos (Yoruba slang that roughly translates as “twig eaters”). According to estimates, more than 4 million are unemployed and millions more earn low wages on the black market, which means lurking on the poorly lit streets are countless desperate people who may resort to home break-ins, carjacking and kidnapping rather than beg for spare change to make ends meet. Precious few of the established players in Nigeria’s booming music industry offered any penance as they streamed in to mingle with the gilded business class and an occasional hopeful Afropop upstart. 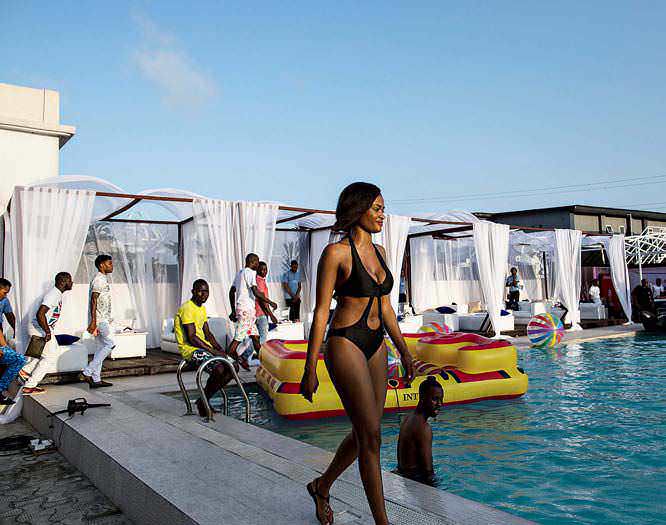 In recent years, a handful of Afropop artists have hit the popular charts in the U.S. and Europe, and remixes and collaborations— Wizkid with Drake and Skepta, and P-Square with Rick Ross—pop up on YouTube and SoundCloud. Major Lazer may sample a polyrhythm and a Yoruba lyric from Burna Boy, while Wizkid adopts a Lil Wayne swagger. But in Africa the music is everywhere. Lagos is the laboratory and the loudspeaker, conjuring and blaring Africa’s continental soundtrack to all 54 countries of the motherland.

At two a.m. one of the biggest stars in the room, Burna Boy, stood in his booth, wearing a straw hat and a gold medallion over his white T-shirt. He took a long pull from the Hennessy bottle in his right hand and reached for the mike with his left. The hype man set the mood. All heads turned. DJ Obi, a Lagos mainstay, laid down a beat, and Burna Boy launched into his hit “Like to Party.”

Imagine hitting the clubs in Toronto or New  York and seeing Drake or Jay Z grab the mike. That rarely happens, but in Lagos clubs, when artists turn up—which they often do—they almost always deliver. The promise of priceless impromptu performances and ostentatious displays of wealth are two reasons the Lagos club scene is world-class.

As the giddy clubbers moved en masse to the dance floor, many of them holding up their phone to capture their Burna Boy moment, mine vibrated in my pocket. It was Bizzle, the most unlikely of industry power players and a respected influencer in the Afropop multiverse. All around me his colleagues trickled in; the party was peaking, but he told me to meet him at Club 57.

I found him there at three a.m. in his peach Ankara outfit, laser lights darting over his head, women everywhere. The music was so loud it was hard to hear, but every few minutes another old friend or acquaintance, or a music manager with a demo, stopped by to deliver a pitch or offer an invitation.

“He’s got a good spirit,” said musician Seun Kuti, who was dancing in a nearby booth and is the youngest son of the legendary Fela Kuti. “Everybody who has come across him has something good to say about him, but most of them say hello because they need him.”

Bizzle, born Abiodun Osikoya, is the 30-year-old A&R manager for Mavin Records, and like so many successful Lagosians, he was born rich. When he was in high school, a wave of “returnees”—children of the Nigerian diaspora educated overseas and tired of bashing their heads against the European and American glass ceilings—came home in search of real opportunity and a chance to shake off the anxiety of racism.

As far as many of the returnees were concerned, the old stories of Africa—the ones about war, poverty and corruption—were outdated. It was a new Africa now. Mobile-phone technology wired the continent, investment and entrepreneurship were flourishing, and Nigeria, with its oil wealth and energetic population—a significant portion of which was under 35—was poised for unprecedented growth. Lagos even had a new sound.