Could Kevin Hart Become The Biggest Stand-Up Comedian Ever? 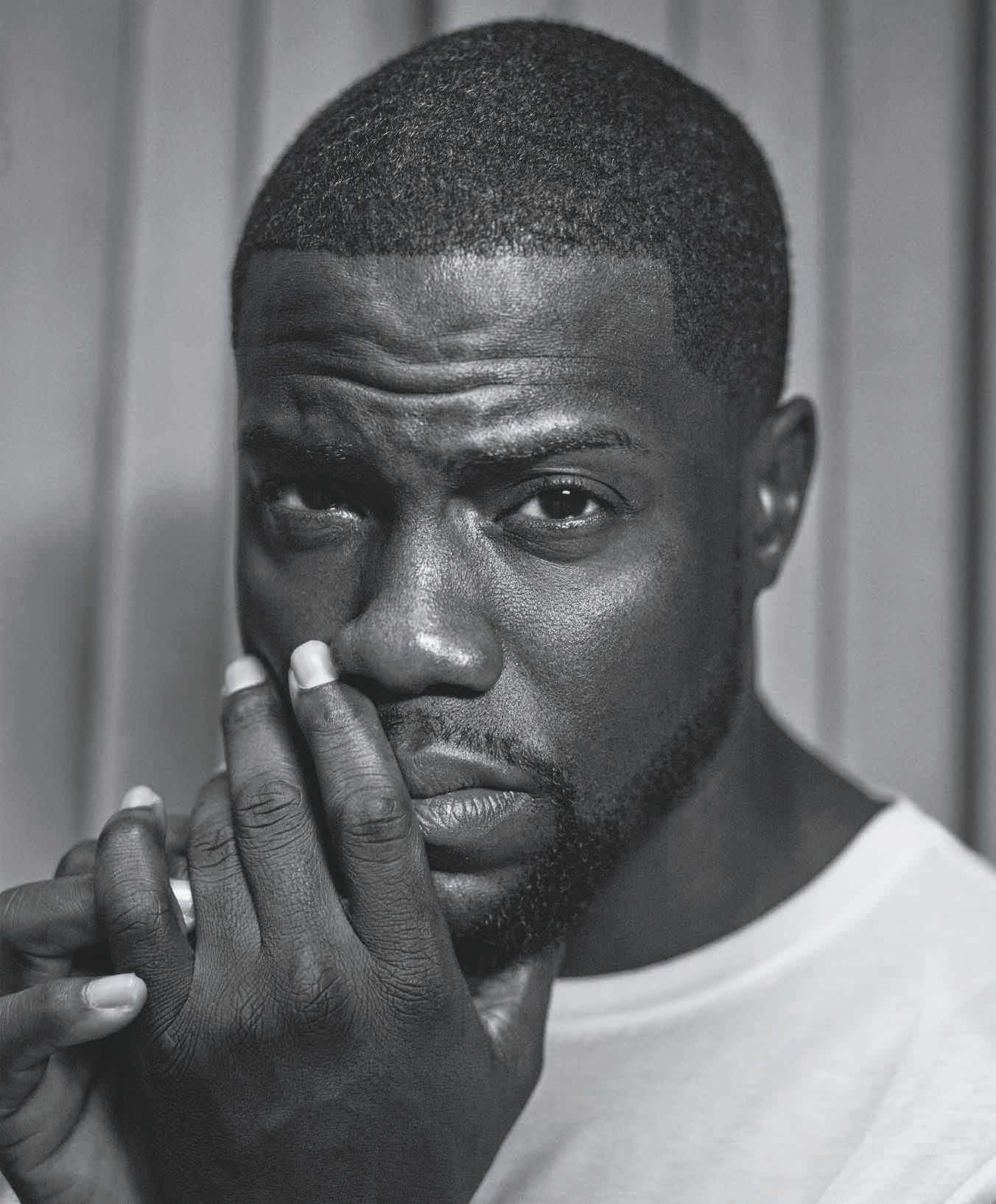 Kevin Hart is poised to become the biggest stand-up comedian ever.

Not that he’s kicking back to celebrate: His movies, including Ride Along, Get Hard and Central Intelligence, have raked in more than a billion dollars globally, and yet he works like an unknown still angling for an NCIS callback. Since last January, Hart has appeared in half a dozen films, including this month’s What Now?, a genre hopper about his recent record breaking global comedy tour. That movie, which mixes stand-up footage with a fictional James Bond–style back story, is expected to smash box office records too. Hart is also producing TV shows, building a video-on-demand network, partnering on tech deals and signing endorsement contracts.

In other words, his life is as dazzling as that gold mike he wields on stage. No wonder he calls himself the “comedic rock star.”

At 37, Hart is at the peak of his popularity, and all signs point to continued domination on screens both large and handheld. He has a keen sense that comedy today is an every- where experience, whether you’re spending an evening with him at the megaplex, buying his new Nike “Hustle Hart” sneakers or letting him guide you on the Waze app. Wherever you go, Hart’s quicksilver voice and contagious energy are with you.

He was born on July 6, 1979 in Philadelphia, the younger of two boys. His mother, Nancy Hart, raised them; father Henry Witherspoon was a heavy drinker and coke addict who spent time in jail on drug charges. Being funny saved Kevin well before he was getting laughs professionally. At the shoe store in Philly where he worked, his pratfalls and snappy observations made him the star salesman on the floor. But “regional manager” wasn’t going to cut it. After high school, Hart played small comedy clubs under the stage name Lil’ Kev the Bastard. People urged him to quit, but he followed the paths blazed by heroes like Chris Tucker, J.B. Smoove and Eddie Murphy, eventually willing his way to Hollywood.

For years Hart struggled. Sitcom after sitcom tanked. SNL rejected him. His marriage collapsed. But he turned heartache, and even his mother’s death from cancer in 2007, into gold. His 2011 Laugh at My Pain standup tour and subsequent concert film became his first real hit. The five years since have been a rocket ride: He hosted the MTV Music Video Awards, guest-starred on Modern Family, produced and starred on the Real Husbands of Hollywood series and made a handful of movies each year (The Wedding Ringer, The Secret Life of Pets and Think Like a Man and its sequel, to name a few), all but one of which went to number one. He has two young kids, Heaven Leigh and Hendrix, from his first marriage, and this year Hart married model Eniko Parrish. Along the way, he became a living counterargument to an ugly show-business assumption: that African American actors can’t sell movie tickets in the global market.

Contributing Editor David Hochman, who last interviewed Trevor Noah for playboy, spent several days with Hart on both coasts over the past year. “Kevin’s got this massive, hyperactive energy that makes you for- get he’s a small guy,” Hochman says. The two of them hung out most recently in the ultra-luxurious Baccarat Hotel in Manhattan, where Hart was tailoring the menu to his dramatically fitness-conscious tastes: “I’ll have a burger but no cheese, no lettuce, no tomato, no onion, no sauce and definitely no bun,” he told the amused waiter. “Do the same thing with a chicken patty.” Says Hochman, “Kevin knows what he wants in every situation. It’s not Oscars. It’s beyond mere money and fame. Kevin Hart wants to be the Genghis Khan of comedy.”

PLAYBOY: Your new stand-up concert film follows you on the biggest comedy tour of all time: 156 shows, 112 cities, 13 countries and five continents. That’s a lot of airport body cavity searches.

HART: You get used to it. The good thing is, flying private takes a lot of the hustle and bustle off it, makes the ins and outs a little more convenient. But the whole goal behind the tour was not only to make history but to go beyond what people would expect a comedian to do. To be able to play so many venues in so many cities and countries, to sell out multiple shows and arenas, to do stadiums— it blows up the idea of “You’re just a guy telling jokes,” right? You show the global importance of laughter.

PLAYBOY: How does your material change when you’re playing to a crowd in Singapore versus an audience in, say, Brooklyn or Cape Town?

HART: I change nothing nowhere. Nothing. That’s the beauty of it. To become a universal comedian and really stay true to the meaning of universal, you come up with comedy that appeals to everyone. We set so many records. We sold 100,000 seats in New York alone, with three sold-out shows at Madison Square Garden and two more shows at the Barclays Center in Brooklyn. It’s completely crazy. And it’s not just crazy here. My international shows sold out in three days, all with the same material and the same level of laughter. California, Cape Town—the people are amazing, and they respond. Durban, Qatar, Dubai, Singapore. Same thing everywhere. Funny is funny.

PLAYBOY: What was the toughest crowd?

HART: Well, Abu Dhabi was definitely the scariest before I got there. I was so afraid to go because I didn’t want to offend anybody. I heard you could rub the culture in the wrong way. You know, because of the language and sexual content, I wondered, How far can I push it? What can I do? But I talked to people, and they said, “Kevin, these are your fans. They want you over there.”

PLAYBOY: Did you really think something would happen to you?

PLAYBOY: You sold out Lincoln Financial Field stadium, where the Eagles play in Philly. Doing stand-up for 53,000-plus people in your hometown must have been wild.

HART: That was some wild-ass shit. First time a comedian ever sold out an NFL stadium. We knew Philadelphia was going to be massive, so we turned it into a huge production. We had 84 cameras on me and a gigantic wall of screens behind me. So my backdrop was a video wall that acted as a visual point of view that matched whatever I was saying through out my show. As I’m joking about my house, the screens change into the set of my house. Now I’m talking about my backyard. It flips. It switches. As I’m walking out, the cameras walk with me. I wanted to transform my stand up comedy show into something with a movie dynamic that’s never been seen. And then shit starts to explode. We go all James Bond Casino Royale with the biggest fight scenes. Fire on the stage. A whole back story about what happened to me leading up to the show. People say, “What the hell are you doing, Kevin?” But with a movie like this, it can’t just be me coming out and telling jokes. We’re too big for that. The production has to be big. I paid too much not to go huge. I’m in with finances for about $13.8 million on this one.

PLAYBOY: You personally financed all this?

HART: Out of my damn pocket. Every cent. This is all me. I fully financed a movie, and Universal distributed it. They act as a partner. I know me. I know my value. When you’re dealing with other people’s money, you can’t control it. But when you invest in yourself, you’re in charge and the rewards come to you.

PLAYBOY: Some have predicted this could be the highest-grossing stand-up concert film of all time.

HART: That is the plan. I’m going for the win on this one, you know? Eddie Murphy still holds the record for stand-up concert film for Raw, at $50 million in gross. My last concert film, Let Me Explain, did $32 million, but that was on only 900 screens or something like that. This one is on screens everywhere. All signs are pointing that this could be the big one. This could achieve the highest level of success ever. It’s all part of the progression.

PLAYBOY: But does bigger equal funnier?

HART: I grow with my fan base, man. I grow and I change. If you look at my stand-up specials—if you look at I’m a Grown Little Man and then at Seriously Funny and Laugh at My Pain, you see it. So What Now? shows my progression not only as a comedian but just as a man. You see me going through things. You’ve seen me married. You’ve seen me go through a divorce. You’ve seen the consequences of divorce. You’ve seen my kids grow up, and as they’ve grown, how I’ve changed. Now that I’ve changed, how do I feel? How do I feel about where I am, people treating me, the places I put myself in, my relationship with my family?

PLAYBOY: What’s it like when you come across one of your old stand-up routines now?

HART: It can be weird. I was watching Grown Little Man recently, and the way I’m touching the mike, you can see my nervous energy. I’m not comfortable, at least not at the level I’m at now. I’m also rushing. You’d think somebody was chasing me with a machete. The speed is off the hook. There’s no break. Now I see a guy who’s full of fear. You’re out there on stage and you look up, you see all the people, and there’s real tension: All right, I don’t want to lose these people. Now I feel like I’m much more in command. It’s all about growing and improving. I want to continue to get better as a stand-up.

PLAYBOY: Not that your movie career is hurting. In the past year alone, your credits have included What Now?, Ride Along 2, Central Intelligence and The Secret Life of Pets.

HART: [Laughs] Yeah, I feel like a slacker if I don’t have a movie coming out every two months.

PLAYBOY: Chris Rock joked at the Oscars this year that he can’t afford to lose another role to you. What do you make of the complaint that African American actors don’t get the same opportunities in Hollywood as white actors?

HART: First of all, Chris is a great friend. I thought it was a great joke. Here’s my opinion: When people speak on the diversity issue in Hollywood or the lack of actors or actresses of color, I’m not going to sit up here and play dumb to it and act like it isn’t an issue. But at the same time, when you bring more attention to an issue, it becomes a bigger issue. Whereas if you try to figure out a solution and do things to help position yourself or people of different races, shapes and sizes to have more options, that’s where you can be of service. If you’re not making shit happen, you just become a part of the problem. You know what I mean?

PLAYBOY: But how does the problem get fixed?