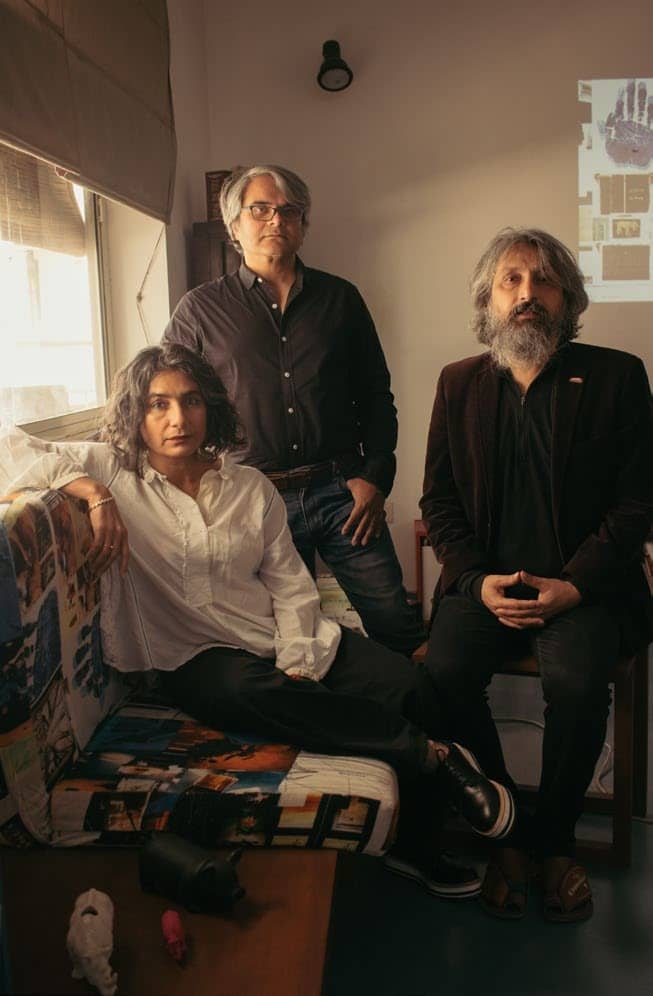 The artistic triumvirate of RAQS Media Collective – Monica Narula, Jeebesh Bagchi and Shuddhabrata Sengupta – has been in the field of art since 1992.

The collective’s work is erudite, layered and deeply perceptive, often holding acute gravity. This year, it will be helming the Yokohama Triennale in Japan as its Artistic Director. It is a role not unknown to the collective. Among a constellation of gallery exhibits worldwide, the collective has been the curator of the Shanghai Biennale (2016) and of In the Open and in Stealth exhibition at MACBA, Spain (2018). This is the first time the Yokohama Triennale, which began in 2001, will have a non-Japanese director.

When I meet the three in their brightly-lit studio, they are huddled at a large wooden table, spectacles pinned to their noses, peering into their laptops, while sipping black coffee. With just a few months away from the opening of the Triennale, they are neck-deep in work. The walls are lined with book shelves stacked with slim copies, tomes and monographs on art, philosophy and history. On their table, amidst a pile of opened, face-down reference books and stationery, lies a blueprint of the Yokohama Museum of Art’s architectural anatomy, bearing scribbles of what-will-go-where. It is where the Triennale, opening on July 17, will come to life.

In 2018, the Yokohama Triennale’s committee released a press statement stating that while they received countless international proposals for the directorship of the 2020 Triennale, RAQS Media Collective’s artistic vision stood out. What was your proposal?

The press statement was released because it underlined how the committee saw the future of the Yokohama Triennale. From its inception in 2001, up till now, the Yokohama Triennale has always been curated by someone who is Japanese. For the first time, they wanted to open it out to someone who was not from Japan, and by doing so they established that they wanted a different approach to what the exhibition has been so far, as well as what it could be.

The register with which we proposed to them, was looking through the lens of Yokohama street life. What we were proposing was not thematic in structure. Which means that we didn’t propose a theme, which had a certain degree of contemporary urgencies; we proposed a different way.

We decided that we will give a series of sources – the sources would be life journeys, intellectual arguments or other material — that would help produce a space, which was conceptual, affective and open-ended for everybody to visit in their own way. These would then produce the architectonics of the whole journey within the exhibition, both for artists and public.

What are these sources that you speak of?

Initially, we had three sources. One was the book “Yokohama Street Life”. It is about an itinerant, daily-wage labourer called Nishikawa Kimitsu, who was also a voracious reader. An anthropologist named Tom Gill produced a long series of interviews with him, and in these interviews Nishikawa gives an incredible sense of Yokohama, which is a crisscross of multiple ideas and history. The city, till not so long ago, was the first port entry to Japan – so modernity’s entry point into Japan was through Yokohama. Nishikawa’s – a dock-worker’s – imagination of the world and his philosophical thickness is incredible.