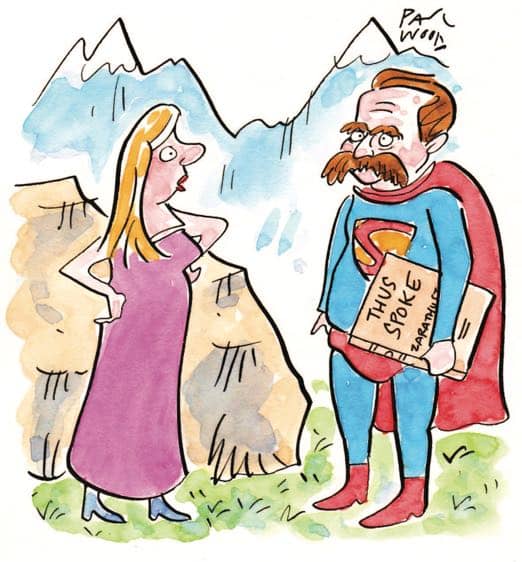 philosopher of otherworldly order who argued that our senses do not reveal any valuable or fundamental truths. Nietzsche is a selfproclaimed inverter of Platonic philosophy, denying and damning all that is eternal, perfect, and transcendent. However, an overlooked parallel between Nietzsche and Plato in their aesthetic ideas shows they have some unexpected common ground. Specifically, they both attack broad classes of art, arguing that such art is socially problematic. The problem for both of them is that art can negatively affect the development of higher types of people.

“But wait,” you might already be saying, “I can remember Plato’s anti-art attitude; but isn’t Nietzsche a proponent of art, even at times holding it above his often beloved science?”

This is somewhat true. Throughout his career Nietzsche promotes art as one of the most important human activities, and some of the people he most admires are artists. However, Nietzsche’s relationship with art is more complicated than a simple yea- or nay-saying. This is apparent from even a cursory glance at his writings criticizing the life and music of his former friend and hero, Richard Wagner. The later Nietzsche’s sustained attack on Wagner is part of a wider account of the nature and value of art which gives criteria for distinguishing valuable from valueless art. As with Plato’s aesthetic philosophy, these criteria are deeply related to broader moral and meta-physical concerns. Here I will determine what the points of similarity and difference are between how Nietzsche and Plato view art, explaining these similarities and differences in the context of their broader philosophies.

The majority of Nietzsche’s argument I’ll use takes its most explicit form in aphorism 370 of The Gay Science. The same aphorism, with slight modifications, is also in his Nietzsche Contra Wagner. The argument is directed against Romantic and Christian art, and, in certain respects, it resembles some of Plato’s arguments against poetry in the Ion and The Republic.

Plato’s arguments are diverse, but amount to the idea that art is pleasurable but misleading, and so dangerous. He sees the artist as something like a Pied Piper. For instance, in the Ion he argues that philosophers rather than poets should be the teachers of the Greeks, since poetic genius comes from divinely inspired madness rather than from knowledge, and the knowledgeable people should be the teachers. In other words, the inspired but ignorant poets should keep quiet and not try to teach anyone through their recitations. In The Republic he argues that poetry should not be allowed in the ideal society because it stimulates people to attempt to fill social roles for which they are not ideally suited, and this would result in social disharmony.

The most well-known and important ideas of the mature Nietzsche first see expression in The Gay Science. The first four Sections of this work were written during 1881-82 as an outgrowth of his previous work, The Dawn, and constitute more-or-less the first blossoming of ideas that Nietzsche would develop throughout the rest of his career, including the will to power, the death of God, eternal recurrence, the revaluation of all values, and the nature and value of human greatness. The last Section was written later, published in the Second Edition of 1887, and contains the thoughts of an even more mature Nietzsche.

The earlier Sections contain a series of aphorisms specifically on art (76-107), but aphorism 370 comes from the last Section, and as such comes from the mind of Nietzsche only a few years before his collapse into insanity, and well after his break from Wagner (and, perhaps tellingly, after Wagner’s death in 1883).

This is Nietzsche’s argument against Romantic or Christian art, based on 370 and a few other aphorisms:

1. All art is produced in the service of life, to alleviate some kind of suffering or illness.

4. Consumption of either type of underabundant art has effects on the consumer, in particular preventing the flourishing of great spirits.

5. Great spirits are valuable; so if something prevents their flourishing then that thing should not be produced.

6. Therefore art that is made as a remedy for underabundance of life – which includes Wagnerian opera, Romantic pessimistic art and Christian art – should not be produced.