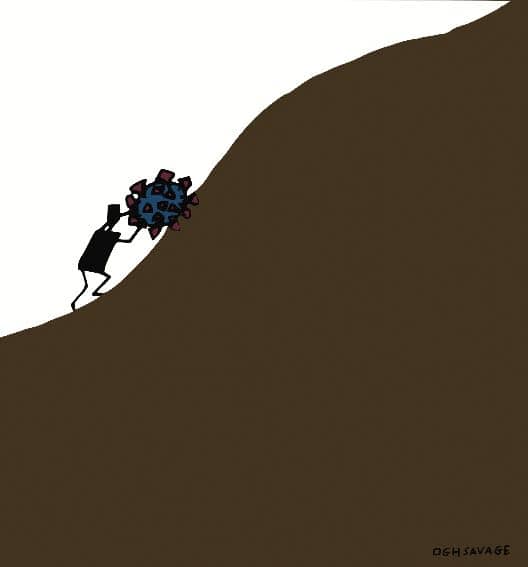 Many popular reading lists for the COVID-19 pandemic include The Plague, a 1947 novel by Albert Camus. The author was an existentialist philosopher who was also a journalist, a writer, and a member of the French Resistance to the Nazi occupation. Camus was born in Algeria, and his father died soon after his birth. For a fascinating glimpse into Camus’ life, have a look at Albert Camus: A Biography, by Herbert R. Lottman.

Though he disavowed being called an existentialist as a means to avoid association with Jean-Paul Sartre, a one-time friend turned enemy, Camus’ work nevertheless centers upon existentialist themes, such as each person’s need to take responsibility for their own choices and actions and in doing so to create meaning for their lives. For the existentialists there is no yardstick by which to measure meaning; rather human beings ascribe meaning to life themselves. Camus’ unique twist on this involves couching it within ‘the absurd’. For Camus, we must take responsibility for creating meaning for ourselves just because of the fundamental absurdity of life – the mismatch between what we would want from life and what it actually gives us. And perhaps the most absurd part of the entire affair is that we never find out if we did it right or not. In The Plague living virtuously is presented as one way of creating meaning. But for Camus, even virtue is not meaningful beyond what it means to the one who has it.

In The Plague, the need for the individual to confront the absurd stands out in stark relief, masterfully woven into a fictional narrative of a cholera outbreak which many interpret as an allegory for the Occupation of France during World War II. The first sense of ‘plague’ in the text is literal – a disastrous epidemic which ravages of the town of Oran in Algeria, so that it must be strictly quarantined. However, the second sense in which the term is employed in the novel is more striking, and more enduring. It stands for a decadence of culture which has led Oran into a currency-fixated complacency, especially with respect to the fragility of the relationship between humanity and nature. This complacency results in a lack of vigilance and a resulting inability to mount adequate defenses against the outbreak, which ultimately, tragically, claims the lives of far too many of the town’s citizens. It’s possible to read the book in such a way as to ascribe the outbreak of plague in the first sense to the prevalence of the plague in the second sense.

2020 will forever be known as the year of COVID-19. Politically, I think it will also be remembered as the year in which authoritarian regimes around the world made public their inadequacy. And for too many of us, it will also be remembered as the year in which our own elected officials were too slow to act to prevent the loss of a loved one. Our societies too had become somewhat complacent; the effects of that complacency have been painful. However, as Camus might remind us, all is not lost. We have united in the face of the tragedy, and many people have become better than they were before, setting aside narrow selfish concerns to donate personnel protective equipment to hospitals, care for each other, and stay home to avoid transmitting the disease. This is only one way in which Camus’ novel has resonance for us now.

The volunteer Jean Tarrou is perhaps the most striking, the most beautiful, the most admirable character in The Plague. Despite being a stranger visiting town and despite his lack of professional medical training, he sees what needs to be done, and he does it. Tarrou is unable to turn the tide of the plague, and he is unable to save the lives of many people affected by it; but still he stands, stalwart, unyielding, convinced of the rightness of his actions, willing to risk death to save others. In fact, the risks add up as he works, and he does eventually die from the plague, becoming the epidemic’s last victim.

Tarrou’s long soliloquy toward the end of the book is perhaps the most brilliant moment in this extraordinary work. The purpose of this speech is to describe what a close reader might call the ‘real’ plague which is the subtext of the book – the instinct to kill another human being, or at least the tendency to bring about their death by action or inaction. Some people don’t know they have it, this monster lurking within. Others have learned to live with it. For Camus, it would seem, the only path to goodness is to become a third type of person – the type of person Tarrou is: someone who becomes self-aware and works to change himself by helping others. Tarrou knows he is stricken, and seeks to alter himself.