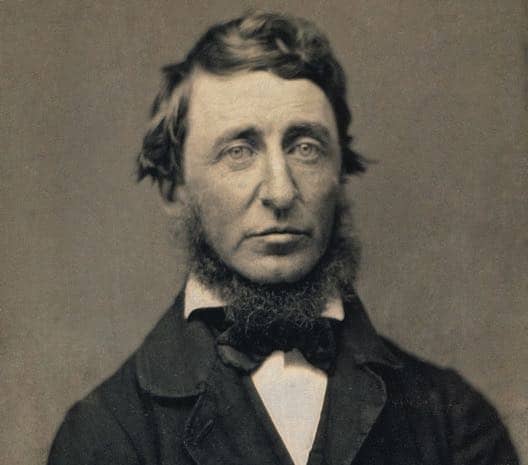 J.R. Davis asks what Thoreau’s experience of isolation can teach us.

What might philosophy have to say about social distancing – and, for some, complete social isolation? Here it may be useful for us to reflect on Henry David Thoreau’s experience as described in his book Walden (1854), which details his own time of self-isolation.

Walden is a unique utopian account about simple living. It is not easily categorized: ‘a social experiment’; ‘a journey of spiritual discovery’; ‘a manual of self-reliance’ – many different epithets have been attached to the work to describe it. Some also criticize it, perhaps rightly, as being overly idealistic. But we might at least say that it describes an application of Transcendentalist philosophy. Walden is quintessentially Transcendentalist. Set in the backwoods of Massachusetts, it teaches us both how to live deliberately and how to be alone with ourselves: how to embrace solitude without feeling lonely. Solitude is a good, and very different from loneliness.

Thoreau and his friend Ralph Waldo Emerson were the two most notable figures of Transcendentalism. This was an intellectual movement in early nineteenth century America, intent on positively rethinking contemporary society, transforming culture from unreflective conformity to a purified individualism. It sprouted from English and German Romanticism, and was arguably the first Western philosophy since the ancient Greeks to be directly influenced by Eastern philosophy, such as the Hindu Upanishads. In Walden, Thoreau often quotes Confucius, whose translated works had just reached America. Unlike much Western philosophy, Transcendentalism’s modus operandi was intuition, not reason. But in a sense, I think Transcendentalism was also an early form of Critical Theory – a rationalist critique of contemporary society rooted in individual progress.

Like Existentialism, Transcendentalism was never systemized into a formal school of thought. Some of its concepts remain as amorphous as Heidegger’s Dasein. But unlike Existentialism, it propounded a somewhat naïve optimism towards humanity. Transcendentalism’s philosophical influence on other thinking is latent, if under-appreciated. Friedrich Nietzsche, for example, admired aspects of it. Nietzsche is ripe with trenchant criticisms of modern philosophers, save one – Ralph Waldo Emerson, the father of Transcendentalism. He loved Emerson. In 1884, Nietzsche (in The Gay Science) described Emerson’s Transcendental thoughts as being “the richest in ideas in this century.” But you may be wondering what a nineteenth century philosophy such as Transcendentalism can offer us for our challenging times.

An Experiment In Isolation

In 1845, Thoreau set out on a unique experiment – to live alone in a cabin he built near Walden Pond, in woodlands owned by Emerson. Thoreau’s ultimate purpose was to see if he could live a deliberate and fulfilling life with the mere essentials, solely relying on the fruit of his own labors, shedding the unnecessary surplus of modern existence, even as it was then. “I lived alone, in the woods, a mile from any neighbor,” Thoreau begins Walden, “in a house which I had built myself, on the shore of Walden Pond, in Concord, Massachusetts, and earned my living by the labor of my hands only. I lived there two years and two months.” So starts Thoreau’s reflexive and reflective journal on simple living in nature.

Living need not be complicated, according to Thoreau, and much unhappiness is wrought from the burdens of modern society. He writes, “Most men, even in this comparatively free country, through mere ignorance and mistake, are so occupied with the fictitious cares and superfluous lay coarse labors of life that its finer fruits cannot be plucked by them.” He has a point here. I’m sure I’m not the only one who stresses out during tax season every year – another burden of modern society.