Petticoat TERROR OF THE PLAINS 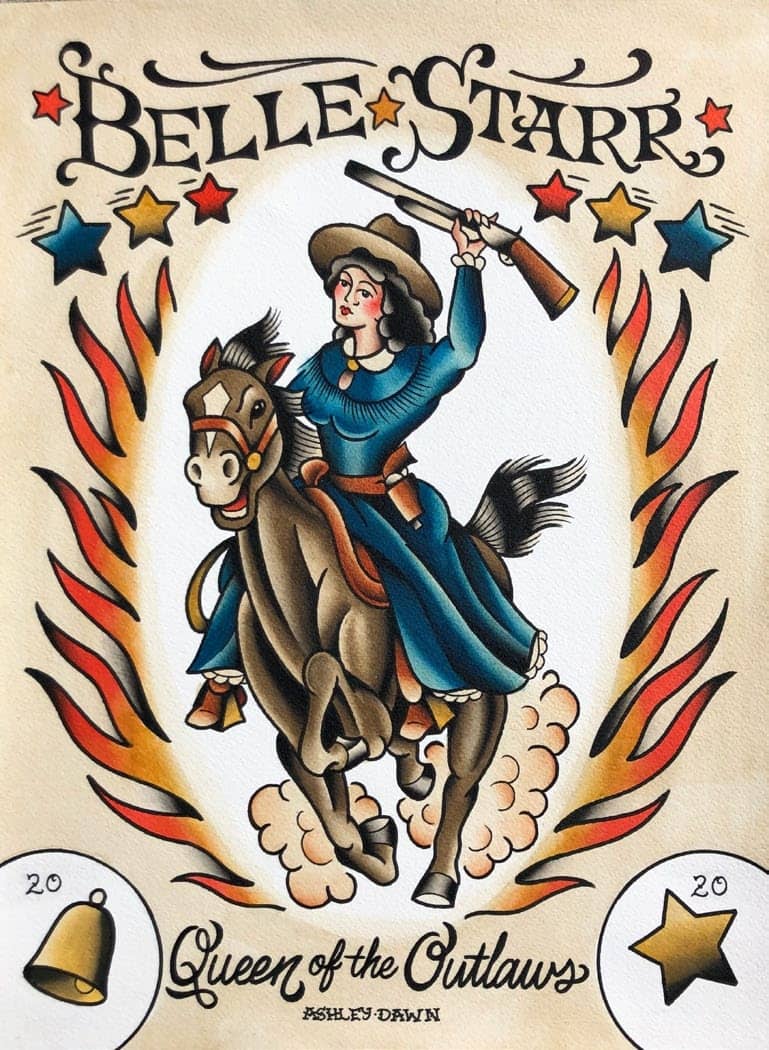 WHETHER SINNER OR SAINT, MONSTER OR MADONNA, BELLE STARR IS ONE OF THE MOST ENIGMATIC AND MISUNDERSTOOD FIGURES IN OKLAHOMA HISTORY.

KARLIE YBARRA
THERE WAS A time within the memory of men now living when this dread name struck terror to the hearts of the timid and caused brave men to buckle an extra holster about their loins,” wrote Captain Kit Dalton in his 1914 book Under the Black Flag.

By the time that book was published, the woman Dalton was referring to, Myra Maybelle Shirley—better known as Belle Starr—had been dead for a quarter century. Her life was long over, but her legend still was gaining momentum. Borrowing her cachet for his own overblown biographical account, Dalton went on about the “Fearless Indian Outlaw.”

A more accomplished musician never coaxed dumb ivory into melody; a more daring bandit never hit the train nor cut a throat for the love of vengeful lust. A more winning smile never illuminated the face of a Madonna; a more cruel human never walked the deck of a pirate ship. She dispensed charities with lavish hand of true philanthropy and robbed with the strong arm of a Captain Kidd. No human ever risked life and liberty in more perilous ways for friendship’s sake than did this phenomenally beautiful half savage, nor was the gate to a city of refuge ever opened wider for the distressed than were of the doors of her humble mountain home . . .

Almost every word was fiction, but Dalton was by no means alone in this sin. Just months after Starr departed her earthly vessel, New York writer Richard K. Fox published Bella Starr: The Bandit Queen or the Female Jesse James and sold thousands of copies. Considering Starr’s name was misspelled in the title, it’s no surprise that the book is full of errors. Leagues of articles, books, and movies followed, many of which used Bella as a primary source.

Starr is among the most recognized female figures in Western lore, but she might also be the least understood. So if she wasn’t a hellcat on a horse galloping across the plains while firing two sixshooters at trailing U.S. Marshals, who was she? Perhaps the one thing Dalton and the others got right was that Starr was a fascinating set of contradictions.

“I’ve never seen so much rubbish written about someone in my life,” says Michael Wallis, a Tulsa author whose Belle Starr biography is slated for release in summer 2021. “When I talk about the West, I say, ‘Forget about the movies and the pulp books and all of that. Just know this: There were some white hats, and there were some black hats, but the majority were gray. Myra Belle Shirley’s hat was gray—and a lighter gray than many other romanticized figures from the West.’”

MYRA MAYBELLE SHIRLEY was born near Carthage, Missouri, on February 5, 1848, to Eliza—née Elizabeth Hatfield of the famously feuding Hatfields—and John. While John made a comfortable living as the proprietor of the Carthage Hotel, Eliza took care of the couple’s five children. Myra and her siblings grew up with many advantages. She performed piano recitals to adoring audiences in the hotel lobby. John’s extensive library offered the curious young woman a chance to explore philosophy and history. And at the Carthage Female Academy, Myra excelled in Latin, Greek, and Hebrew, among other subjects.

Though generally well-liked, Myra was no wilting flower. Contrary to what was considered proper for females at the time, she yearned for more than the domestic arts.

“Two interests obsessed her: horses and the outdoors,” wrote historian Glenn Shirley in his 1952 book Belle Starr And Her Times. “A competent horse-woman, she spent much of her time roaming the hills with her brother Bud.”

Bud, a.k.a. John Allison M., was six years Myra’s senior, but he treated her more like a friend than a little sister. He even taught her how to shoot a pistol and a rifle.

Idyllic as her childhood seemed, it was marred by bloodshed and the specter of war. When Myra was six, Congress passed the Kansas-Nebraska Act of 1854. This allowed states to decide whether to permit slavery within their own borders. Pro-slavery Americans—particularly those from neighboring Missouri— flocked to Kansas to vote, steal, and otherwise illegally influence the election.